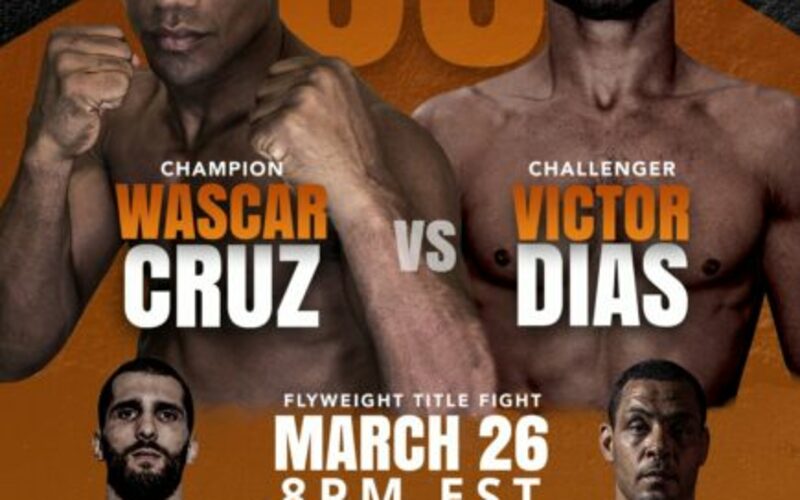 Titan Fighting Championship returns for its second card of 2020 with Titan FC 68, live from the InterContinental in Miami, Florida. The card is headlined by a flyweight title fight between Dominican champion Wascar Cruz and Brazilian challenger Victor Dias. Both fighters are bringing a two-fight win streak into the fight. The 11-6 “La Avispa” Cruz claimed the championship in his last outing back in August, knocking out Christian Ynastrilla in the third round. The 8-2 “Pacoca” Dias picked up a split decision win in his last fight with Titan back in June against Cleveland McLean, but also picked up a win in December at WOCS 58 against Romario Garcia.

Titan FC 68 will also feature the professional MMA debut of wrestling standout Richie Lewis. “The Savage” Lewis was a two-time NCAA tournament qualifier and U23 World Championship winner at Rutgers University, and will face Danny Vega, who picked up his first professional win in June 2019 after losing his first two outings.

At welterweight, Titan FC and Brave CF veteran “Russian” Rami Hamed looks to make it two wins in a row against “The Goblin” Cliff Wright, who is moving up two weight classes following his loss to Jason Knight at the main event of iKon Fighting Federation 5 earlier this month. Overall, Wright has lost three MMA bouts in a row, along with a loss to Dave Rickels in Bare Knuckle FC, but will look to get back on track against the American Top Team product in Hamed.

Roybert Echeverria def. Samirbek Sabyrzhan via TKO (punches), 1:54 of Round 1

Slava Borschev def. Corey Dulaney via TKO (ground and pound), 1:31 of Round 1

*UPDATE: Hamed/Wright fight was cancelled prior to start of the card