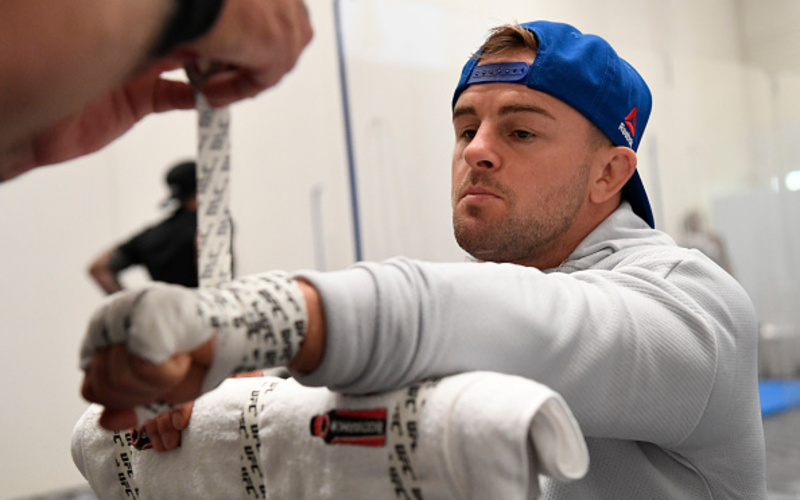 Cody Stamann (19-3-1 MMA, 5-2-1 UFC) will look to stave off the wrestling-heavy approach of Merab Dvalishvili (12-4 MMA, 5-2 UFC) and get back in the win column when the two bantamweights collide at the UFC event on May 1.

Stamann noted Dvalishvili as a tough fighter who has been able to implement his wrestling on everybody he’s fought in the UFC thus far. “The Spartan” also gave props to Dvalishvili’s cardio, though Stamann feels he’s experienced Dvalishvili’s approach throughout his own career.

“I came up in the Midwest where everyone is predominantly a wrestler that’s any good,” Stamann told MMASucka. “I’ve fought tough wrestlers in the UFC prior to Merab. Maybe not somebody who’s going to shoot on you 30 times. I fought Bryan Caraway, and he shot on me 25 times. As an opponent, I’ve been here before.”

Stamann took a split decision off Caraway in March 2018 in what was just his third UFC appearance. He noted that Caraway and Dvalishvili both present different styles of wrestling, as Caraway is an American, while Dvalishvili is a native of the country of Georgia who has since relocated to Long Island, New York.

“Caraway is more of an American-style wrestler,” Stamann said. “He’s going to shoot for your legs. A lot of the Russians and Georgians are upper body-type guys. They’re better in the clinch than maybe Caraway was. It’s the same kind of deal. You’ve got a guy who’s kind of sloppy on his feet. All his offense on his feet is a means to get a takedown.”

Stamann said he grew up fighting against opponents looking to take him down.

“If there’s one aspect of my MMA game that I trust and rely on, it’s my takedown defense,” Stamann said. “It’s gotten me to the show. It’s gotten me to where I am today. For me stylistically, this fight is a great match-up. I couldn’t really figure out why Merab wanted to take it. I don’t know if he had something to prove or what the deal was, or maybe I was the only person who was offered to him. I don’t know. If I’m Merab, I would’ve fought anyone but me.”

Stamann said the only time he’s felt a comparable motivation to win a fight was when he fought Brian Kelleher in June 2020 after the sudden death of his 18-year-old brother, Jacob Stamann, a week-and-a-half before the bout. Cody Stamann defeated Kelleher via unanimous decision in what was one of his sharpest UFC performances.

When Stamann signed to fight Dvalishvili, some fans from Georgia took to Stamann’s social media accounts to leave comments that targeted his family.

“My family is something that I hold and cherish,” Stamann said. “That’s the most important thing in my life to me. A lot of Georgian fans, when this fight was originally signed, they said nasty things about my brother who passed and about my mom. Stuff that was unrelated to fighting. It really burned a hole in me. It bothered me deeply. I hang on to that, as unhealthy as that might be, because if I have trouble motivating myself to do some crazy ass, hard work out, I think about what those people said, and all of a sudden, I’m the most motivated human on Earth.”

Stamann wished to make it clear he was not generalizing Georgians as a whole.

“I believe, probably 99.9 percent of Georgian people are great people,” he said. “I don’t know the culture. I don’t know the people. The people who got under my skin, they took it to a place it didn’t have to go. That really did light a fire under my ass.”

When asked what his message was to the fans who targeted his family, Stamann said:

“Bet your house on this fight. Bet your whole house. Bet everything you own.”

Stamann is currently a +175 underdog, according to several oddsmakers listed on BestFightOdds.com. Dvalishvili is a -220 favorite on some bookies.

Stamann said the underdog label is not a familiar feeling for him. He was viewed as the underdog against Tom Duquesnoy, current champion Aljamain Sterling and Song Yadong. Stamann beat Duquesnoy and drew with Yadong in a fight many believe Stamann won.

Stamann, however, said the underdog label is justified against Dvalishvili.

“If you look at my last performance and Merab’s last performance, it makes sense. I had an absolute terrible showing against Jimmie Rivera. I didn’t look good at all. If that’s what people are basing this on, I understand why I’d be an underdog. I would make me an underdog, too. I think anytime you have somebody that’s as tenacious as a wrestler as Merab, chances are, you’re not going to be a favorite in that fight.”

Stamann feels the oddsmakers may have forgotten that he is a high-level wrestler himself.

“I’ve been known to take guys down,” he said. “If you look at the level of opponent that Merab and I faced, it’s not even close. I’ve been fighting nothing but ranked opponents. Merab’s got one ranked opponent under his belt in John Dodson. Other than that, he really hasn’t fought anybody on my level.”

Stamann laughed when learning that Dvalishvili called out fast-rising prospect “Sugar” Sean O’Malley for a bout in July – two months after he and the Georgian are slated to fight.

Hey @SugaSeanMMA why don’t you come beat me up in July?? No way former champ @PetrYanUFC is gonna fight you. https://t.co/gN4Yrl0nVf

“I think he’s making a huge mistake calling anybody out after fighting me,” Stamann said. “The chances of Merab getting Sean O’Malley are slim to none. That’s pretty surprising. Merab seems like a pretty humble dude, but maybe I was looking at him the wrong way.

“Him thinking that he’s going to get Sean; I mean, maybe. After I beat him up real good, they’ll give him to Sean O’Malley, because that’s the kind of fights Sean O’Malley gets … If you’re winning, and you’re on a streak, you’re not fighting Sean O’Malley. You’ve got to lose a few in a row to get the O’Malley fight. If you were good, but you’ve lost four fights in a row, Sean O’Malley’s your guy.”

Stamann’s last bout was against Rivera in July 2020. He took the bout on five days’ notice across the ocean in Abu Dhabi.

“That was a shell of a human who went out there and fought him,” Stamann said. “I know I’ve gotten better. I’ve been training with the same guys for a year and a half. I can see the gap. It’s getting bigger and bigger every day. I know that I’m better. I know I can compete with the best. I’ve just been dying for the opportunity to prove it.”

Stamann was originally slated to fight Dvalishvili in December before the bout fell through. He was then due to fight Andre Ewell in February before Ewell withdrew. Askar Askar nearly stepped in to fight Stamann on that same event, but Askar was not medically cleared.

“That’s a long time to be preparing for something. I’ve never been this disappointed or this active in the gym for that amount of time. I’m the best athlete I’ve ever been.”

Stamann says Dvalishvili would have fared better had they fought in December. As of now, Stamann feels he’s had ample time to prepare for the Georgian’s pace.

Cody Stamann and Merab Dvalishvili are due to square off on Saturday, May 1 at a UFC event where the location has yet to be disclosed, according to the Tapology listing. The event is slated to be headlined by a light heavyweight match between Dominick Reyes and Jiri Prochazka.