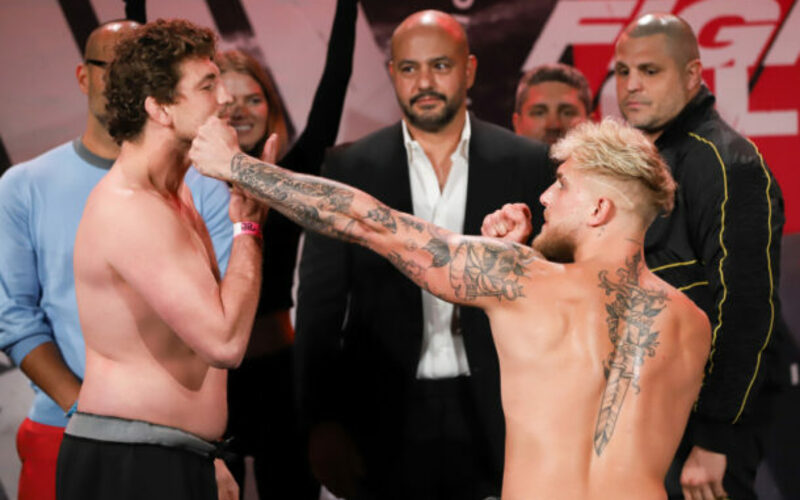 The high-profile boxing match between the YouTuber “The Problem Child” Jake Paul and former Bellator and ONE Championship champion “Funky” Ben Askren will headline the card at cruiserweight. Paul is coming off of a knockout win over former NBA star Nate Robinson in his second professional boxing bout. Askren retired from MMA in 2019 following stoppage losses to Jorge Masvidal and Demian Maia, and will make his professional boxing debut.

Aside from Jake Paul vs Ben Askren itself, the card’s co-main will be a super lightweight bout between former WBA champion Regis Prograis, who responded to his first career loss in 2019 with a KO win back in October, and “El Terrible” Ivan Redkach, who will look to rebound from a decision loss to Danny Garcia over a year ago.

The prelims will feature Junior Younan against Jeyson Minda at middleweight, and Quinton Randall against William Jackson at junior lightweight

Round 1- Jake Paul vs Ben Askren is finally here. Paul comes out with pressure quickly, but Askren quickly begins reaching for the clinch. Paul looking a lot more technically crisp, and a right hand knocks Askren down. Askren quickly gets up, but the referee calls it off. Debatable stoppage, but an impressive performance from the YouTuber nonetheless.

Round 1- The only boxer vs. boxer fight on the main card, Prograis comes in as a -5000 favorite. Prograis looks to have the speed advantage, and after trading jabs, he picks up the action a bit to end the round. 10-9 Prograis

Round 3- Redkach picks up the volume a tad to start the round. He’s not landing much, but still a promising look. Prograis is still doing his thing as well, though, and takes the round. 10-9 Prograis

Round 4- Prograis lands a big left hand early on, and follows up with a combo. He’s starting to land more. A flurry from Prograis at the end as well secures the round. 10-9 Prograis

Round 5- Slow start to the round, but Prograis lands a nice combo a minute in. Redkach is staying around, but punching air. Confidence is growing for Prograis, and fading for Redkach. 10-9 Prograis

Round 6- Prograis opens up to start the round. Lots of pressure from the former champion; he’s all over Redkach. Just over a minute in, a vicious right hook sits Redkach down.

Redkach claims it was low, and is in massive pain. The referee agrees that it was a low blow, but replay clearly proves otherwise. In fact, it appears that Redkach was hit with a forearm to the body instead of the glove. Redkach is being stretchered out while the outcome of the bout is being determined.

Round 1- After an hour and a half, action finally resumes. Mir comes in with a 70 pound weight advantage in his boxing debut, weighing in at 276 pounds. A lot of feeling out to start off the fight, but Cunningham has a significant speed advantage. Not much going on, but Cunningham takes the round. 10-9 Cunningham

Round 2- After more feeling out to start the round, Mir begins to bring the fight close with some clinch work. Mir begins to apply pressure at the end of the round, but Cunningham still looks crisper and is landing better shots. 10-9 Cunningham

Round 3- Cunningham begins to land more, and the speed advantage for “USS” is growing. Mir lands a nice left hand at the bell, but not enough to win the round. 10-9 Cunningham

Round 4- Action is starting to pick up. Cunningham is continuing to land better and more often, but Mir is staying tough and landing some hard shots of his own. 10-9 Cunningham

Round 5- Mir quickly bullrushes into a clinch, attempting to wear down “USS” Cunningham. Cunningham lands a hard right hand about halfway through the round to stymie the pressure and take the round. 10-9 Cunningham

Round 6- Final round begins with Mir coming forward once again. Cunningham lands a hard combo a minute in, but Mir eats it well. Mir putting Cunningham up against the ropes and lands some body shots to end the fight. 10-9 Mir

Round 1- Fournier comes out looking much more relaxed, athletic, and frankly more talented than Reykon. To his credit, Reykon applied pressure and took some shots, but there’s a clear discrepancy here. 10-9 Fournier

Round 2- Quick knockdown out of the gate from Fournier. Reykon gets up at six and begins running around the ring. Ninety seconds later, Fournier catches him with a body shot for the second knockdown of the round. Up at nine for Reykon, but the end is surely near. 10-7 Fournier