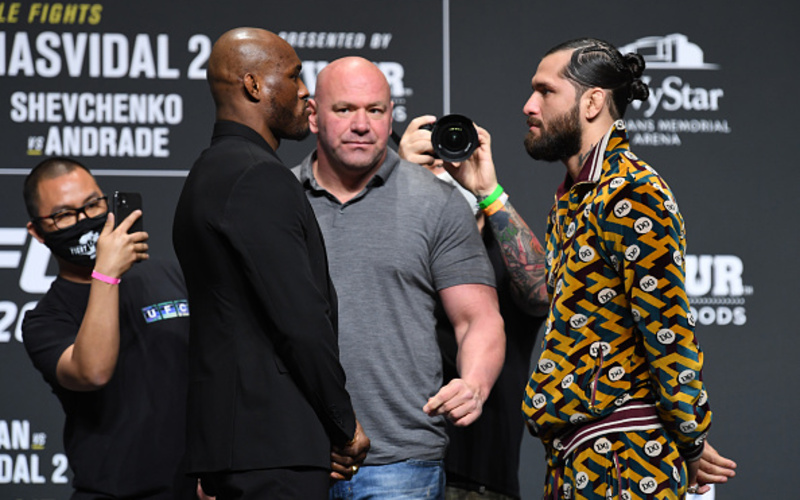 Jorge Masvidal finally gets his shot at Kamaru Usman with a full training camp this weekend at UFC 261. Usman defeated Masvidal via decision at UFC 251 in July 2020 when Masvidal stepped in on six days’ notice to replace Gilbert Burns. Usman defeated Gilbert Burns after his win against Masvidal and Masvidal has yet to take another fight since his loss to Usman. UFC 261 will also feature Valentina Shevchenko and Weili Zhang defending their respective titles.

Jorge Masvidal has a professional mixed martial arts record of 35-14. With 16 of those 35 wins coming by way of knockout. He has only been finished in three of his 14 losses, once by knockout and twice by submission. All three of the losses where Masvidal was finished came before his time with the UFC. Out of his 11 decision losses, five of them came down to split decisions. This means at least one judge in all five of those fights thought that Masvidal won the fight.

Jorge Masvidal has defeated guys like Nate Diaz, Ben Askren, Darren Till, Donald Cerrone, and James Krause in his time with the UFC. Masvidal’s knockout over Ben Askren is the fastest knockout in UFC history and also won knockout of the year in 2019.

Kamaru Usman became the UFC welterweight champion at UFC 235 with a unanimous decision victory over Tyron Woodley. He has since defended his title three times. First by knocking out Colby Covington, then he won his decision over Masvidal, and finally, he was able to TKO Gilbert Burns at UFC 258 in February.

Usman holds a pro-MMA record of 18-1 and his only loss is a submission loss to Jose Caceres in his second professional fight. Usman is undefeated in the UFC beating guys like Rafael Dos Anjos, Demian Maia, Leon Edwards, Woodley, Covington, Masvidal, and Burns. He won bronze at the division two wrestling championships in 2008. He then won silver in 2009 and gold in 2010.

Jorge Masvidal needs to come into this fight in the best shape of his life. Usman is a dominant wrestler so the odds of him attempting takedowns is almost 100%. Masvidal needs to have enough cardio to keep getting up and being fresh in the later rounds to still give himself a shot. If Masvidal is able to stuff a takedown or two early in the fight we might see a boost in his confidence.

Kamaru Usman should have one goal going into this fight. That goal is to get Jorge Masvidal on the ground and keep him there. Make him tired and control the tie-ups on the cage. Usman showed himself the perfect blueprint to beat Masvidal in their first fight. Now he just has to execute.