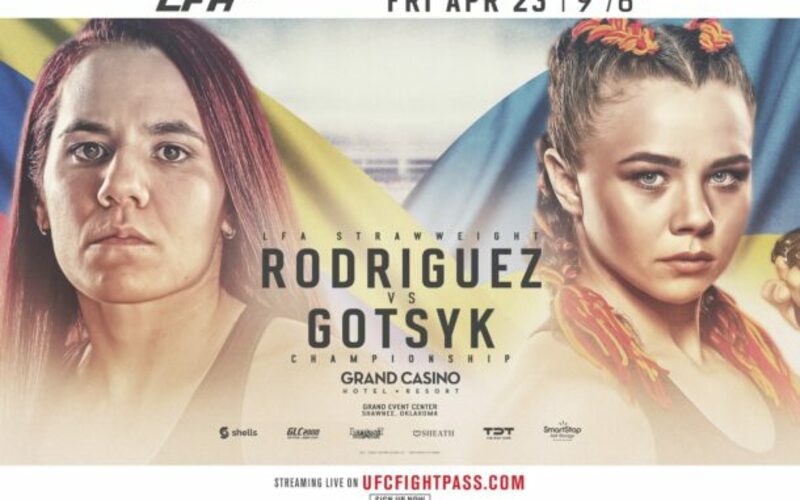 LFA returns to action tonight with LFA 105, live from the Grand Casino Hotel and Resort in Shawnee, Oklahoma. The card will be headlined by a vacant strawweight title fight between Ukranian “Phoenix” Svetlana Gotsyk and Venezuelan “La Fiera” Piera Rodriguez.

The 24 year old American Top Team product Gotsyk is currently riding a three-fight winning streak, and is listed as one of the top prospects coming out of eastern Europe. Although early in her career, she has faced big names like Bellator contender Lena Ovchynnikova and current UFC strawweight champion Weili Zhang. She will take on the undefeated 28 year old Rodriguez, who returns to the cage for the first time in over a year having finished every fight except for one.

The LFA 105 co-main event features an interesting matchup in the featherweight division between “The Working Man” Jake Childers, who returns to the LFA cage for the fifth time, and Bellator and Dana White Contender Series alum Canaan Kawaihae. Childers is looking to rebound from his first career loss back in July against 23 year old Kawaihae, who returns to the cage for the first time since December 2018, where he rebounded from his only career loss to UFC fighter Chase Hooper. Expect this fight to be a scrappy bout, as each fighter looks to avoid receiving their second career loss.

Tabatha Ricci def. Shawna Ormsby via TKO (ground and pound), 4:50 of Round 2