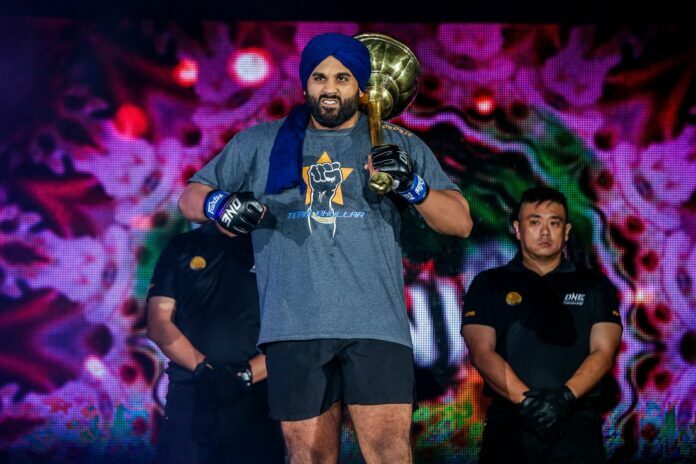 ONE Heavyweight World Champion Brandon “The Truth” Vera has reigned over ONE Championship’s heavyweight division since 2015. But at ONE: Dangal, on Saturday, May 15, he will face his most formidable challenge to date.

“Singh” Arjan Bhullar will step inside the ONE Circle to try and take the gold and bring it back to India as its biggest martial arts star to date.

Since joining ONE, Vera has finished each of his heavyweight bouts by knockout.

Even more impressive, his heavyweight bouts have not gone past the second round. Vera’s athleticism and skill have carried him to dominant performances in all of his heavyweight matchups.

As one of the most well-rounded heavyweights, Vera poses a threat in every facet of the action. Vera’s knees and elbows have been lauded throughout his long and successful career, but his ground game is also a threat. Although he has only secured one submission win in his career, everybody knows his guard is active, and he is always looking for a submission when on the ground.

And his Jiu-Jitsu may be needed on May 15 because Bhullar is one of the division’s most decorated grapplers.

Bhullar’s wrestling is top-notch. The Indian-Canadian was a two-time NAIA National Champion, and he won the 2010 Commonwealth Games in India as a representative of Canada. Bhullar then competed in the 2012 Olympic Games.

Training at American Kickboxing Academy, Arjan Bhullar transitioned into mixed martial arts and has seen tremendous success. While still relying on his wrestling background, Bhullar has put the pieces of the puzzle into place to become a competent striker and submission threat on the mat.

With a 10-1 career record, Bhullar has made his rise toward the top. His impressive ONE debut against Mauro Cerilli at ONE: Century has led him to get this opportunity against the division’s king. But Vera is a different challenge. Both in name and skill.

The general thought may be that this matchup is a striker vs. grappler affair, but Vera’s bottom game will be a risk for Bhullar if he chooses to take the action to the mat. On the opposite side of the spectrum, Bhullar’s developing striking game under AKA and Javier Mendez will make him a threat on the feet.

It will be Bhullar’s first time under the bright lights of the main event. It is all about rising to the challenge, something Vera has proven on multiple occasions. The heavyweight showdown promises to be one of the most interesting heavyweight bouts of 2021.

Can Arjan Bhullar finally usher in a new era in ONE’s heavyweight division? There’s only one way to find out. Vera’s ONE Heavyweight World Championship is on the line again, and it headlines a fun-filled event from Singapore.