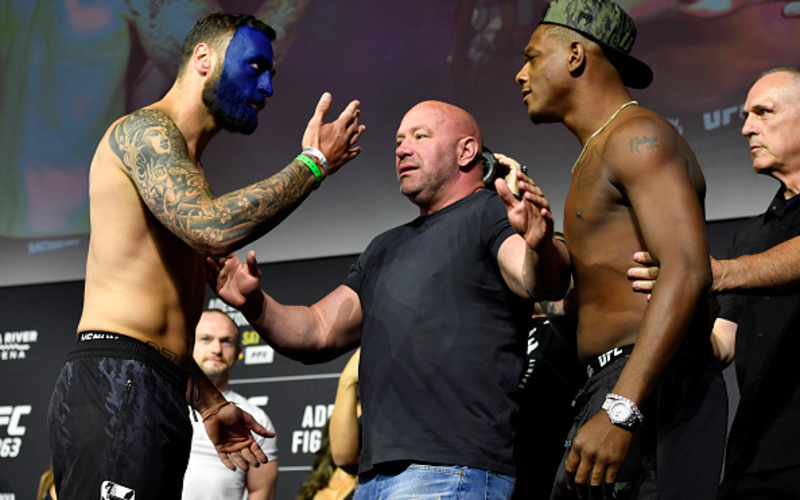 What a night of fights it will be as MMASucka staff picks get set for the final card of this triple-header weekend. The incredibly-stacked UFC 263 will take place later tonight, June 12 from the Gila River Arena in Glendale, Arizona. This will be the promotion’s second appearance at the Gila and its return to Arizona for the first time since February of 2019. Tonight’s main card will begin at 10:00pm ET (7:00pm PT) live on pay-per-view.

Make sure to check out our staff picks from Thursday night’s PFL 4 2021 in Atlantic City and Friday night’s Bellator 260 in Uncasville.

Two sensational title fights are official, the main event for middleweight gold between current champion Israel Adesanya and challenger Marvin Vettori. The two had met once prior in April of 2018, Adesanya taking the close three-round, split decision. After the fight, “The Last Stylebender” would go on to claim the promotional championship over Robert Whittaker and later securing two title defenses. In his last octagon appearance, Adesanya would fall short at becoming a two-divisional king versus light heavyweight champion Jan Blachowicz. Vettori, meanwhile, has remained undefeated following his loss to Adesanya with five straight wins. Dominant five-round decisions over Jack Hermansson and Kevin Holland have led the Italian to his first UFC title shot in hopes to avenge his prior defeat.

The co-main event sees our second title fight as UFC flyweight champion Deiveson Figueiredo and challenger Brandon Moreno rematch. Their meeting last December may have resulted in a majority draw, but the fight will live on as one of the greatest in both flyweight and promotional history. Brazil’s Figueiredo will look for a potential second title defense and a 21st win in his 23rd professional fight. Mexico’s Moreno aims, once again, to capture his first ever UFC title at just 27 years old.

Also on the main card includes the return of fan-favorite Nate Diaz, 38-fight veteran Demian Maia, and the undefeated Jamahal Hill against their respected opponents. Who comes out victorious? See our staff picks for UFC 263 further below.

See our UFC 263: Adesanya vs. Vettori II staff picks below.