Last Friday, Euro 2020 kicked off as Italy defeated Turkey in their opening group game. Taking place across 11 different countries, the Euro 2020 competition concludes in July. The tournament was postponed as a result of COVID-19 so is taking place this year. With ‘Euro fever’ catching many people, one of the trends that has reared its head again is fantasy dream teams. We have a bit of fun and look at who could make a starting 11 from the UFC. Our formation will focus around a common 4-2-3-1.

One obvious fighters stuck out for the goalkeeper spot. Alexander Volkov. At 6’7, with a 80 inch reach advantage, he has that all important reach needed for a goalkeeper. The big Russian would certainly have the aerial advantage over most people, coming out and claiming crosses or corners is something he’d likely excel at. Getting down low to stop shots may be difficult at 6’7, but his height would give him an advantage at getting across his goal line.

Molly McCann. Relentless in the pursuit of excellence, England’s Molly McCann takes our right back spot. Her gritty style makes her perfect for the position and she’s a no-nonsense, solid option.

Mason Jones and Alexander Gustafsson. Speed, determination and drive is what gets Welshman, Jones a spot in our Euro 2020 dream team. Although he is yet to notch a win in his UFC career, his debut entertained us all and his most recent fight he was dominating until he caused a foul. Tactical fouls are a part of football and Jones slots straight in a centre back.

Next to Jones is the Swede, Gustafsson. ‘The Mauler’ is the perfect centre back. Lean, tall (6’4) and has a decent gas tank having been scheduled for five rounds eight times in his career. His height makes him a useful asset to play at centre back.

Our left back would have to be a southpaw who is used to naturally kicking with their left foot. Although Conor McGregor comes to mind, his kicking game has taken a back seat in favour of his wrestling as of late. Our pick for this position is Leon Edwards. Enjoying a big winning streak inside the octagon, he’d enter our Euro 2020 dream team with a lot of confidence. With his kickboxing style, he isn’t afraid to use his power rear leg kick, especially seen against Nate Diaz last time out.

Edwards completes the back four of our Euro 2020 dream team.

With only two spots available, this position was highly contested. With that being said, the two that made our UFC Euro 2020 dream team are Paul Craig and Lerone Murphy. Craig is a savage, all intensity, huge and a unit to get past. He used to be a football coach before training MMA. He’s athletic for his size and would be a good anchor man to protect the back four.

Murphy is quick, lean and from Manchester. There is no doubt that Murphy grew up playing football as the worlds most famous team, Manchester United are right on his doorstep. Having been shot in his youth, he was able to recover and start an MMA career. This determination alone gives him a place in our Euro 2020 dream team.

On the wings, you always need a little flair. Their job is to beat their man, either cut inside or whip in a cross. On the left, we need a left footer, so essentially a southpaw. A southpaw with flair? Conor McGregor makes his way into our Euro 2020 dream team. Every team needs at least one superstar that can’t keep their name out of the media and McGregor certainly fits that bill. He also used to play football at youth level, giving him a slight advantage.

On the right wing, we have Joanna Jedrzejczyk. The former champ has a gas tank for days which means she can get up and down flanks for the full 90 minutes. She has good kicks off either side, meaning she can cut inside or stay wide and whip balls into the box. Her speed also means like she’s likely to get fouled often. This isn’t an issue for the Polish superstar as she has suffered multiple brutal injuries in the octagon and has never given up.

This was a difficult one to pick. There are a number of UFC stars that could have made the Euro 2020 dream team in the number 10 position. Ultimately, we went for Zabit Magomedsharipov. The main trait he has is creativity. His striking is high level and his creativity is what got him a place in the side. The number 10 needs to be creative in order to create chances for the striker. With his spinning attacks, inventive takedowns and a creative striking angles he will without doubt create chances for the team and be a valued member of the starting 11.

Again, like the number 10 position, this one was difficult to choose. Do you want a target man, someone who is tall who you can pump the ball up to? Do you want a small, nippy player who can get in between the defenders and run in on goal? Do you want a mix of both?

For our Euro 2020 dream team we chose Cyril Gane. He’s a huge figure, meaning that he can be a target man and someone to pump the ball up to. Due to his size and stature, he will be able to hold the ball up if necessary. He’s also quick for his size, meaning that if needs be, he can turn defenders and run in behind. Headlining a UFC fight night card in just his eighth UFC bout, we know that he’s able to handle pressure so won’t crack in front of goal. 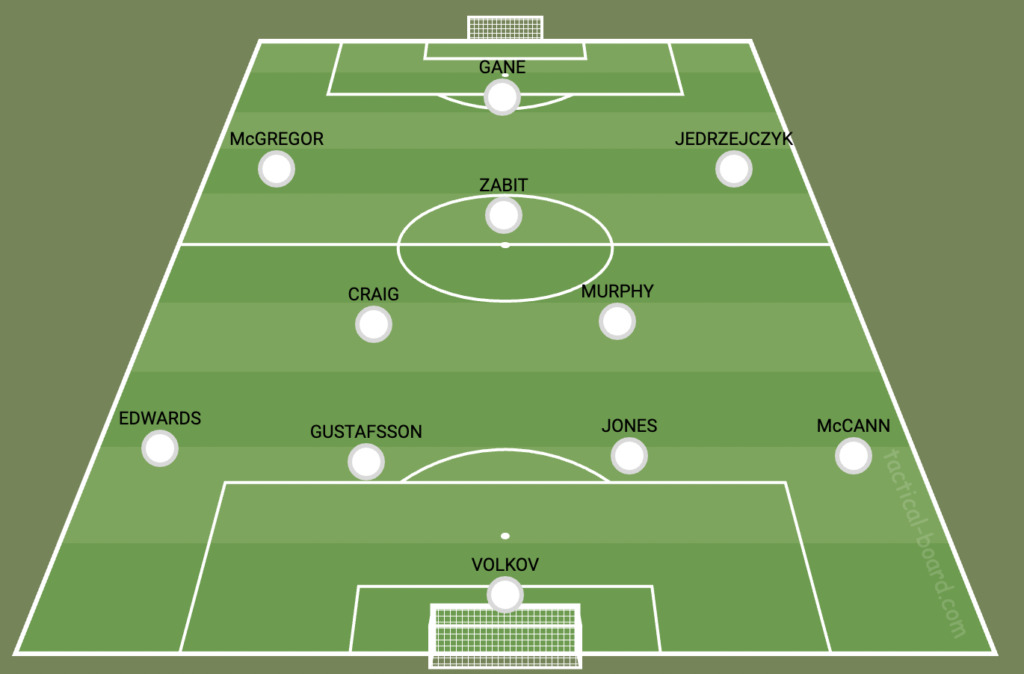