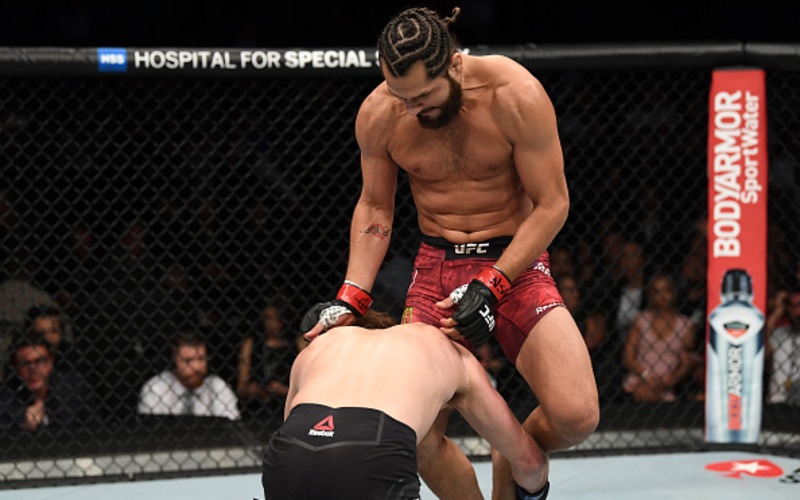 Cory Sandhagen landed one of the most brutal and devastating flying kees in UFC history in his last fight against the former champion Frankie Edgar.

Sandhagen is currently ranked number two in the UFC bantamweight rankings and is in a primed spot to challenge for the belt if he can dispatch the returning TJ Dillashaw this Saturday night. He has the skillset to give a serious challenge to not only Dillashaw but to champion Aljamain Sterling as well.

With the top contender fighting this weekend it only makes sense to take a trip down memory lane and revisit some of the biggest flying knees in UFC history. Over the years there have been plenty of memorable and touching on a handful of them should have you more than eager to see what type of show Sandhagen and Dillashaw will put on this Saturday night.

Yoel Romero knocked out Clifford Starks with a flying knee in his UFC debut, seven years ago today.#UFC
pic.twitter.com/vQELweMUjg

Yoel Romero was making his UFC debut coming off a knockout loss to former Strikeforce Light Heavyweight champion Rafael Cavalcante and he was buried on the card. He was literally the first fight of the night and it only took him a minute and thirty-two seconds to make an explosive first impression.

Romero would use this same move later on in his career against Chris Weidman and we all know the success Romero would find in his UFC career after this first flying knee knockout.

Edson Barboza was riding a two-fight win streak the same as Beneil Dariush was at the time, both men were looking to make a big impact in this fight to get in line for a top contender fight. As you can see above Barboza did just that by landing one of the most brutal knees in UFC history.

Barboza would get a fight with Khabib Nurmaegomedov where he would get mauled more or less, after knocking out Dariush he would go 3-5 whereas Dariush has taken the loss and learned and is now sitting at number three in the rankings.

The flying knee debate continues with Almeida vs Pickett. This one is AWESOME too #DWCOTD pic.twitter.com/FgeLBABgIf

The once young phenom Thomas Almeida landed an insane knee on the scrappy veteran Brad Pickett at what was Conor McGregor’s crowning night six years ago. This knockout would propel Almeida to a record 20-0 and earn him a performance of the night bonus as well.

Almeida would ultimately never prosper into the champion and fighter so many projected and expected and Pickett would win one more fight before retiring two years later.

13 years ago today, BJ Penn knocked out Sean Sherk with a flying knee followed by punches.

Penn didn’t have any blood on his gloves after he finished Sean Sherk so he ran over and grabbed some off of Sherk’s face to lick. 🩸
pic.twitter.com/qOaxQ5jFIL

One of the biggest legends in UFC history or even the sports is without B.J. Penn, the original Hawaiin warrior. Penn gave us fans so many classic moments such as choking out a bloody Joe Stevenson, a flash knockout of Caol Uno, and this knee he landed on the “Muscle Shark” Sean Sherk.

This exact knockout was used by the UFC as a part of its opening montage before pay per views for a while and has been played over time and again. Sadly this would be one of the last big moments Penn would give fans but it’s one that will stand the test of time.

One year ago today, Jorge Masvidal (+175) knocks out Ben Askren with this insane flying knee, breaking a UFC record by doing so in just 5 seconds. #UFC239
pic.twitter.com/WLc0tblEGQ

Saved the best for last, the knockout that has been played time and again and the knockout that propelled Jorge Masvidal to superstardom. Masvidal had been seen practicing the move during the week prior and when he started the fight with it and landed it then UFC history had been made with the five-second knockout.

Masvidal would go on to win the BMF belt against Nate Diaz in Madison Square Garden and become one of the biggest stars of the sport and sadly Ben Askren would finish his MMA career in a decision loss to Demian Maia.