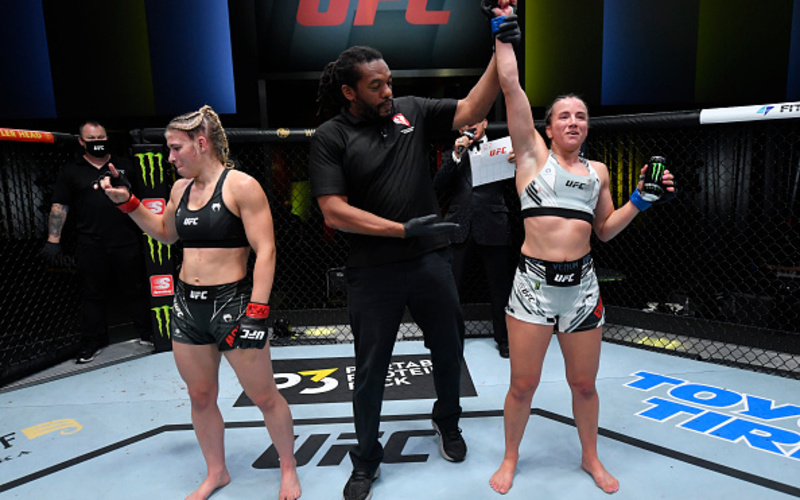 Miranda Maverick suffered her first UFC loss at UFC Vegas 32 when she lost a razor close split decision to Maycee Barber. The judges scored the bout 28-29, 29-28 and 29-28 in favour of ‘The Future’. A number of pros reacted on Twitter, believing Maverick had done enough to get her hand raised. 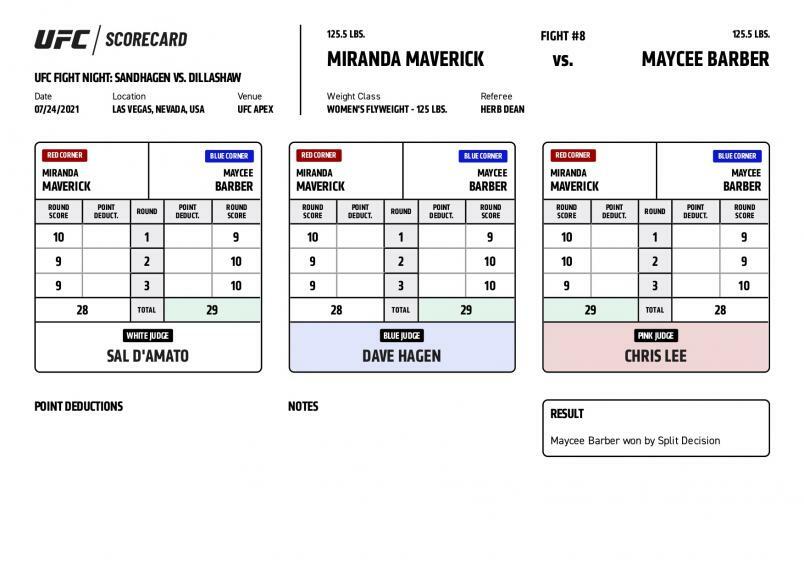 In what many believed would be a close fight, it very much played out that way. The stats would suggest that the judges were correct in their scoring of the first round. Maverick landed much more often, dominated the striking range and did enough to earn the round 10-9. She out landed Barber 18-7 in total strikes, showed great ring generalship and determined where the fight took place. Barber had very little work rate in the first.

The second round was closer and is certainly the round that is contentious. Chris Lee is the only judge who scored the round in favour of Miranda Maverick. The stats would suggest that Maverick maybe should have gotten more of a look in for the round. She almost doubled up on Barber in terms of strikes, outscoring ‘The Future’ 28-15. She also scored the only takedown of the round as well as gaining 1:21 control time. Maverick was also close to locking up a submission at the end of the round, definitely looking for the finish more than Barber.

Pros React to the Result

There are plenty of pros that believe that Miranda Maverick had done enough to get her hand raised in the octagon on Saturday night.

These Judges did you wrong girl @FearTheMAVERICK

My timeline agrees with me. Maverick won. Hmm maybe they should check to see if the judges confused the two fighters. Because when I fought Carla, one of the judges gave the first round to her. 🤷🏻‍♀️ #UFCVegas32

Live odds for maverick vs barber at the end of the fight was -1200 maverick! She lost wow

There was plenty of confusion during the broadcast from Daniel Cormier regarding the ‘live odds’. They seemed to be well off, as can be seen in DC’s tweet. Miranda Maverick was a -1200 favourite at the end of the fight but as we know, didn’t come away with the victory. Maverick has since had her say on the result via her Instagram.

A post shared by Miranda “Fear The” MAVERICK 🦅 (@fearthemaverick_homt)

Elsewhere on the Card

Elsewhere on the card, in the main event, the returning TJ Dillashaw narrowly edged out Cory Sandhagen to a split decision, putting himself right back in the title picture. Dillashaw suffered a huge cut on the inside of his eyebrow, causing blood to pour into his eye. He also injured his knee in the first round, however it didn’t seem to be an issue going forwards.

In the co-main event, Kyler Phillips dominated Raulian Paiva in the first round, but very much gassed out in the end. He came extremely close to finishing the Brazillian in the first, dropping him and out landing him 45-13 on significant strikes. Despite this, Paiva was able to recover brilliantly, winning the final two rounds winning 29-28, 29-28 and 28-28. A scorecard of 28-28 across all scorecards would have been more than fair, as the first round was as close to a 10-8 as you’ll see.

Darren Elkins did what Elkins does. Wore his opponent out by receiving ‘damage’ and was able to rally to finish Darrick Minner.

Mickey Gall impressed with another rear naked choke victory on the prelims. Julio Arce announced his return to 135lbs in a big way with a TKO victory over Andre Ewell and Diana Belbita announced her strawweight debut with a dominant win over Hannah Goldy.