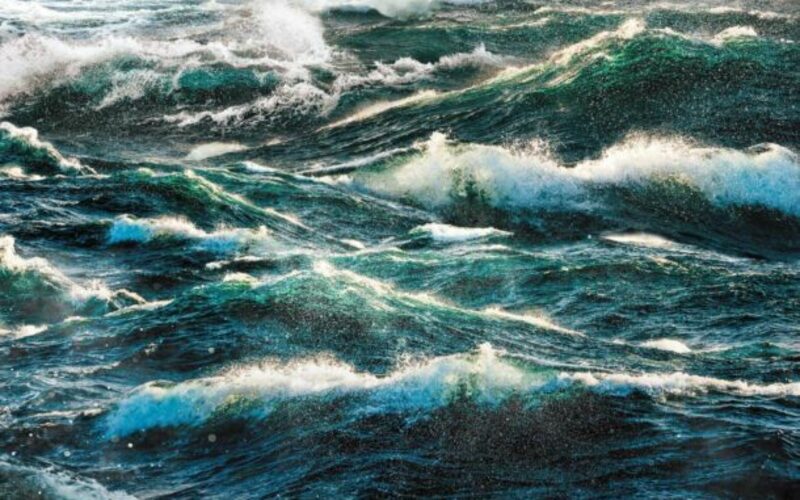 Rizin is returning to its home arena, the Saitama Super Arena, for the quarterfinals of the bantamweight Grand Prix. In addition, we got the first Rizin women’s kickboxing fight, an important lightweight match, a K-1 fighter making his MMA debut, and more. Rizin 30 goes down live Sunday, September 19 at 1:30 AM EST on Live-Now with English commentary. 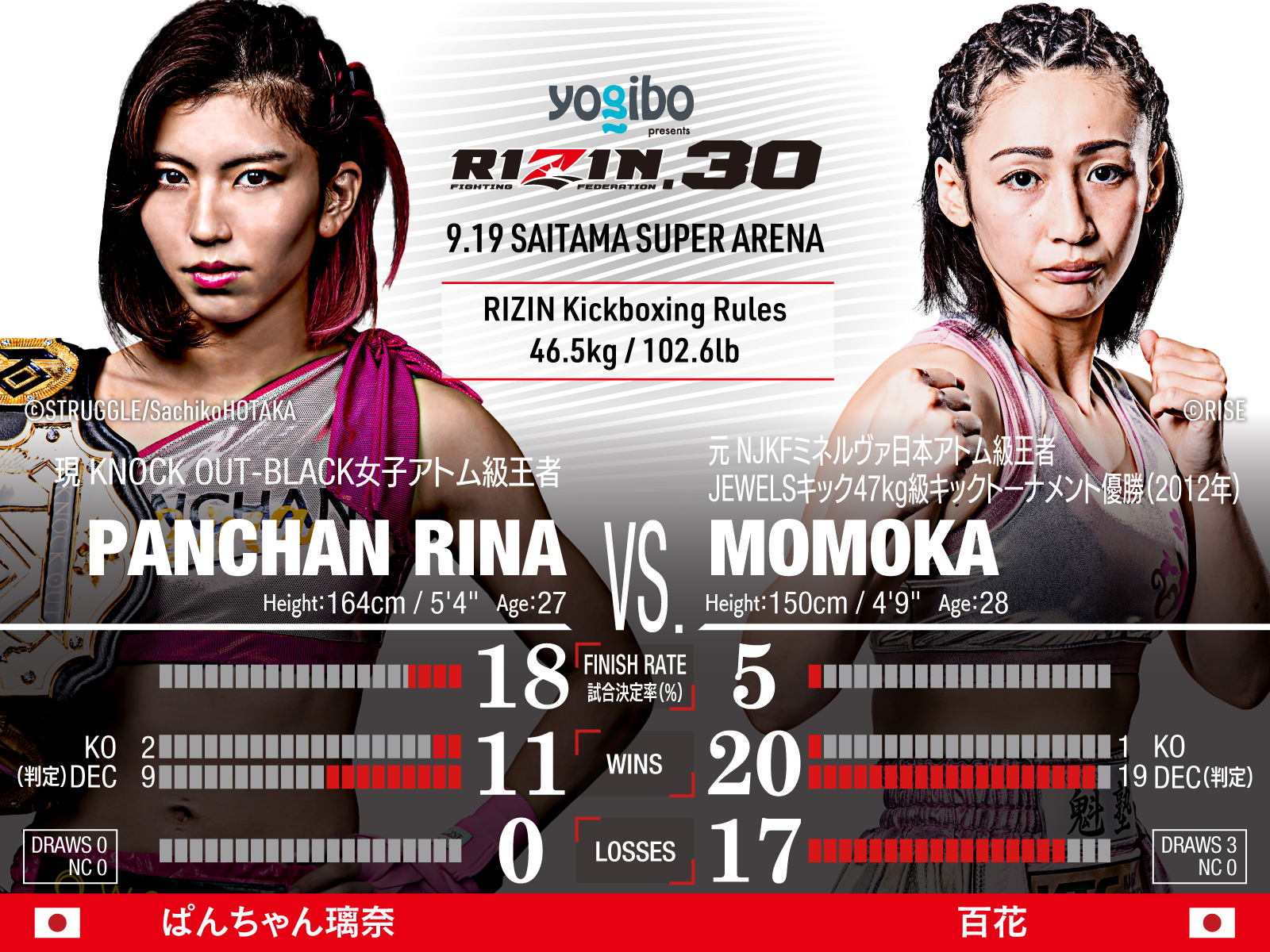 Rizin 30 will showcase the first-ever women’s kickboxing match for the promotion. Photo courtesy of Rizin FF.

In what might be a surprising first, this will be Rizin’s first-ever women’s kickboxing match. Panchan Rina (11-0, 2KO) is a popular women’s kickboxer who is making waves in the scene. She has a fan-friendly style and brings explosiveness to her fights. “I know that the fans want to see an exciting fight with big shots and exciting finishes so I plan to deliver all of that with additional flair,” Rina said.

Momoka (20-17-3, 1KO) may not be having the best luck recently in competition, but she should be nonetheless motivated coming into this match. “All the hype is around my opponent but I am here to spoil the party. I thank her for gathering all the attention, I’ll take it from here.” 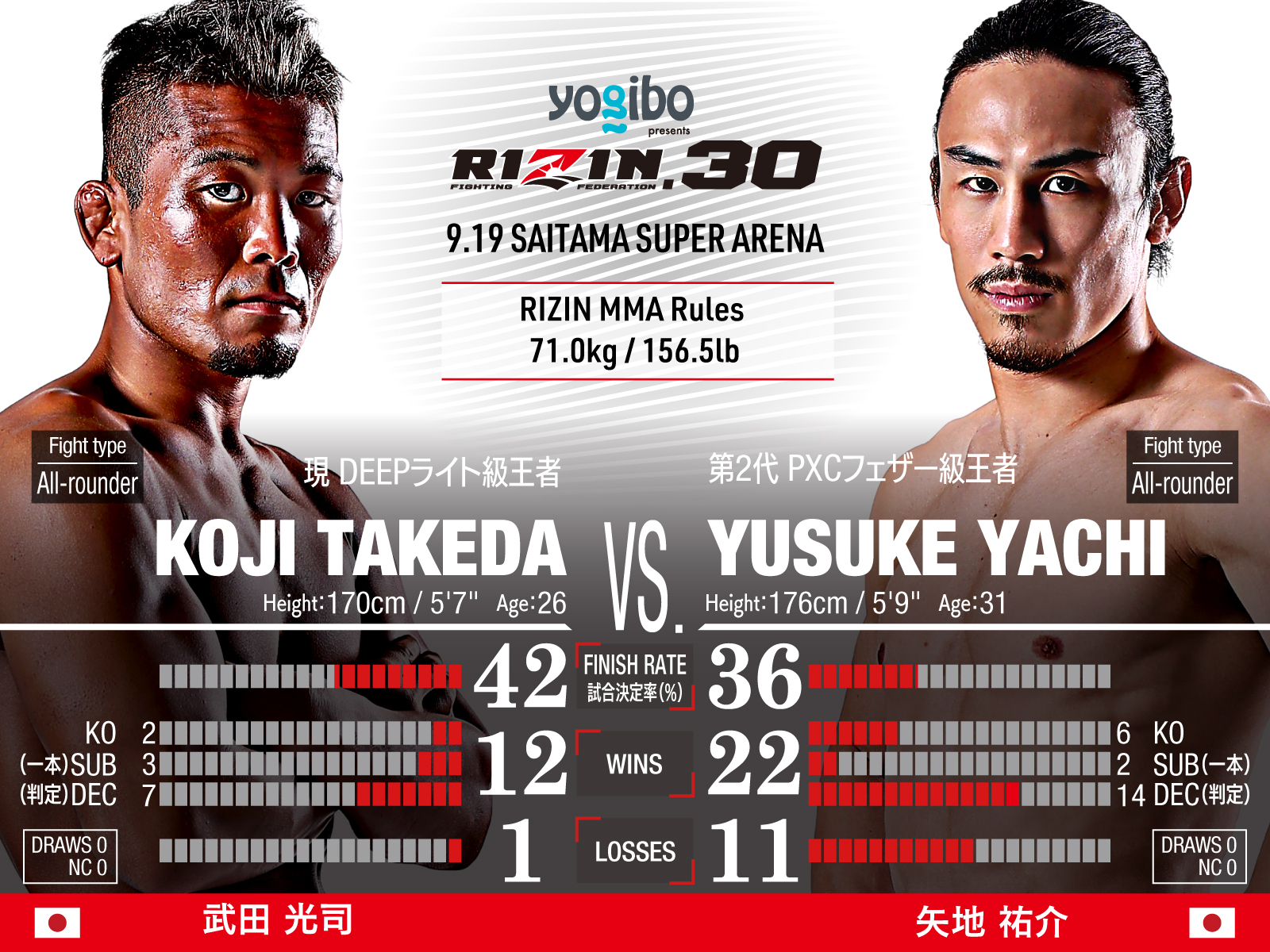 Yusuke Yachi is on a quest to beat all the champions in the smaller organizations. He takes on Deep lightweight champion Koji Takeda at Rizin 30. Photo courtesy of Rizin FF.

Koji Takeda (12-1) is the current Deep lightweight champion and is on a four-fight win streak. His fight against Takasuke Kume from this year was a fight of the year candidate and with a win in this match, he might get a title shot against Rizin lightweight champion Roberto Satoshi d’Souza. “Yachi is a totally different fighter and he is a threat, but he’s only been with his new camp for less than a year. I’ve been with coach [Kazuyuki] Miyata my entire MMA career. The difference will show.”

Yusuke Yachi (22-11) managed to snap his long losing streak this year with a win over Shooto lightweight champion Yuki Kawana. He has made a challenge to all the champions from the smaller organizations. “My opponent is durable and is tough. He continues to come in forward and it is hard to get him to back off. I have a plan against him, so look forward to it.” 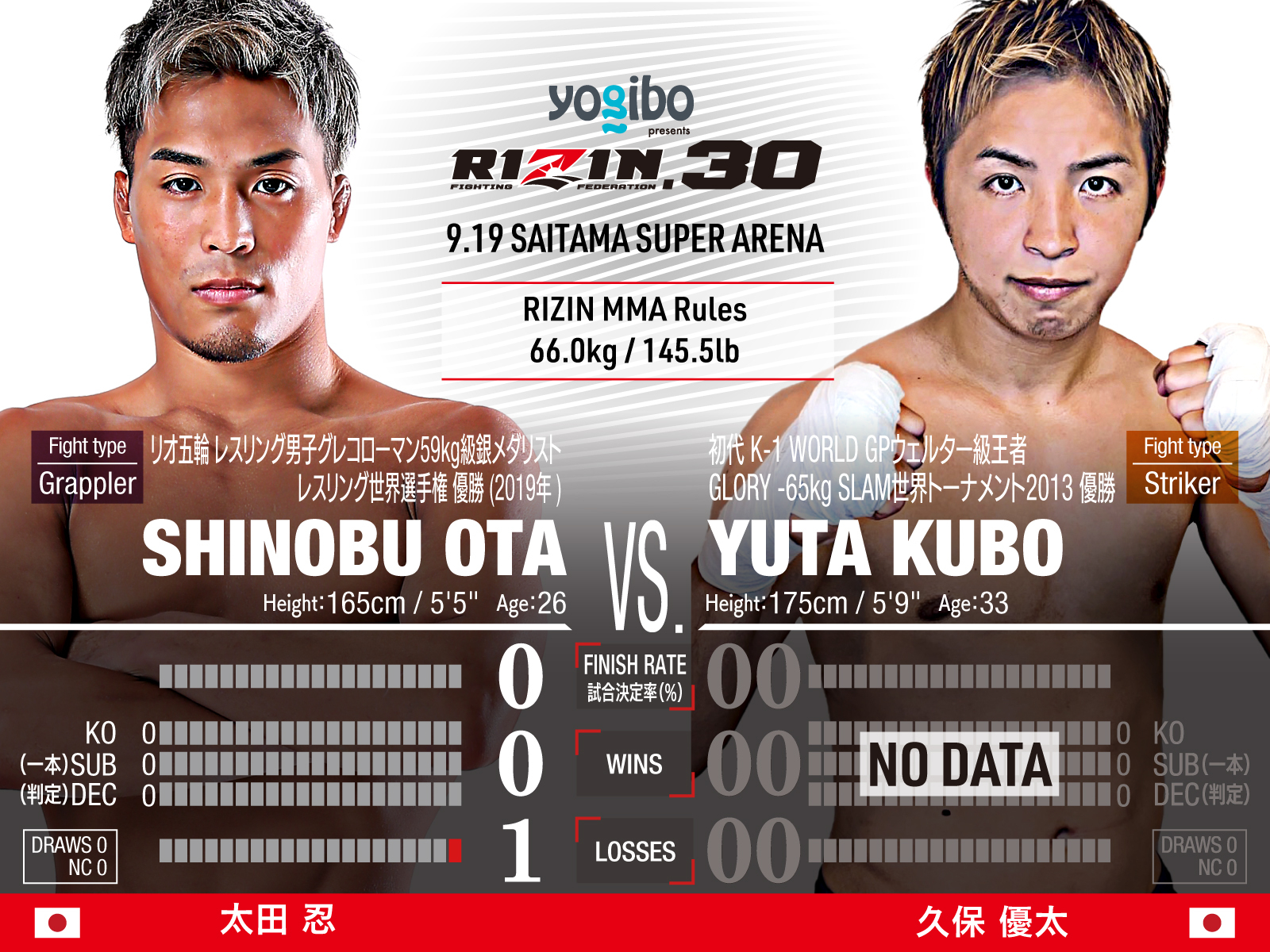 Olympics wrestler vs K-1 kickboxer in what might be the most interesting match of the card. Photo courtesy of Rizin FF.

This is the fight where someone’s 0 has to go. Shinobu Ota (0-1) is a 2016 Rio Olympics silver medalist. He made his MMA debut at Rizin 26 in a losing effort to longtime fighter Hideo Tokoro. “This is a fight that I must win, so I will do what I’ve trained to do and win this fight as expected,” he said.

Yuta Kubo (debut) is a former K-1 welterweight champion. He vacated his title to come to Rizin and is stepping into the fray in his MMA debut. “I know my opponent is an Olympic wrestler medalist but I’m a K-1 Champion as well. This fight will be wrestling vs K-1. He’s not used to punching people but I’ve been punching people in the face for years so that’s a great advantage.” 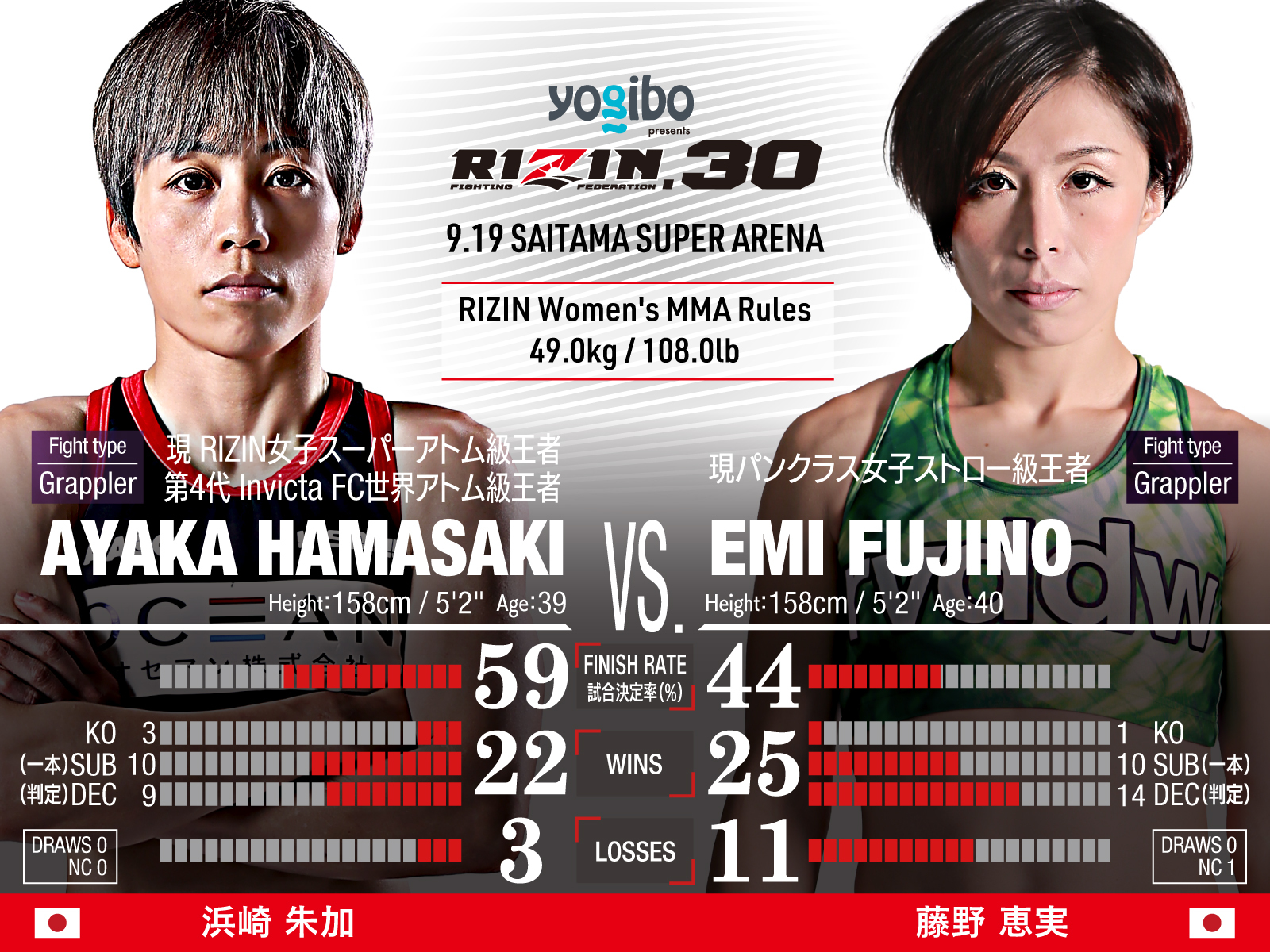 Hamasaki is a two-time Rizin super atomweight champion. She has only one defeat in Rizin and has dominated almost all of her opponents. She didn’t finish Fujino the first time they met but will no doubt try to this time. “I’m excited to be facing an opponent who I’ve faced 9 years ago. Her physical strength is exceptional for a woman.”

Fujino is a former Deep Jewels strawweight champion. A longtime fighter she has beaten many notable fighters including Megumi Fuji, Mei Yamaguchi, and Emi Tomimatsu. “Hamasaki is the best opponent I could have asked for during these times. We both won’t back down so I’m expecting an all out war.”

READ MORE: Check out our preview of the bantamweight Grand Prix

Follow along with MMASucka as we provide you with the results throughout Rizin 30.