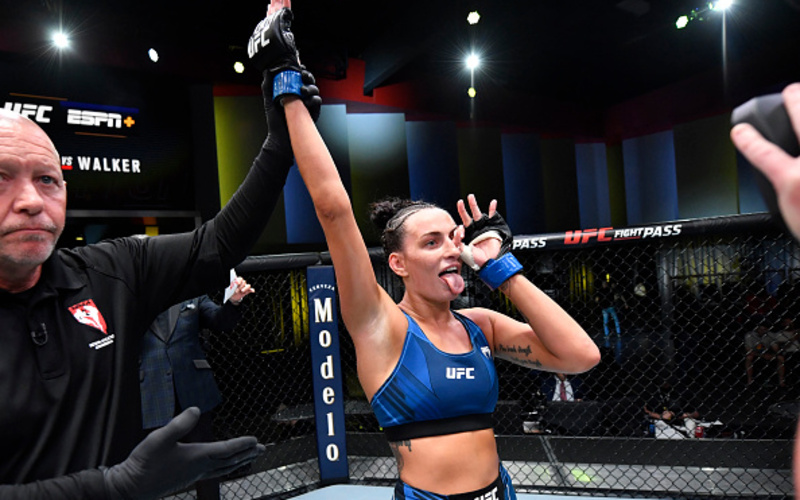 UFC Vegas 38 went down this Saturday night and yet again, we’re talking about Casey O’Neill. The young Scottish star put on another stellar performance and gained her third UFC victory in as many fights. Progressing to 8-0, O’Neill dominated her opponent, Antonina Shevchenko before securing a second-round TKO victory. Earning performance of the night honours for her 9:47 of action, the hot prospect now looks to take a break before getting back in the octagon having made three UFC appearances in a little over eight months.

Domination for the ‘King’

Entering the bout a favourite against the more experienced Shevchenko, Casey O’Neill was able to overwhelm the older sister of the champion with her constant pressure, mixing the martial arts well to keep her opponent guessing. The first round saw O’Neill land two takedowns, despite getting countered on one of them, she clocked up 2:19 control time. She was able to land strikes on Shevchenko whilst on the ground but was outstruck according to the stats. It’s hard not give O’Neill the first round, although she was outlanded, she pressed the action, got the takedown and was able to implement her game over Shevchenko more effectively. 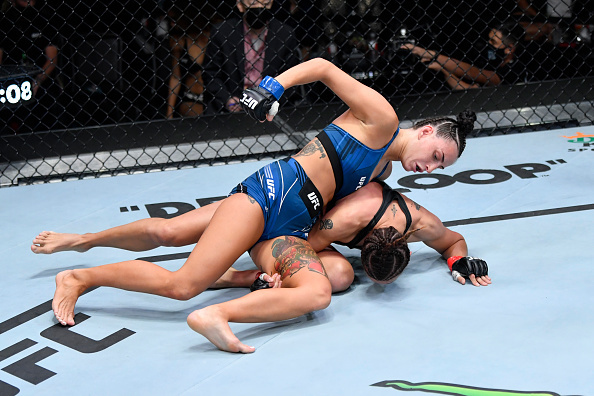 The second round was a complete shut out. O’Neill was able to fake the overhand before getting the takedown and then the fight was in her world. It only took the one takedown for O’Neill to land 102 strikes to Shevchenko’s 20. The fight realistically could have been stopped sooner, however, with that being said, O’Neill did what she needed to do to get her hand raised. Non-stop ground and pound, mixed with a brief rear-naked choke attempt before more ground and pound saw ‘King’ Casey O’Neill yet again get her hand raised.

There is a clear hole in the game of Antonina Shevchenko and it played well into the hands of the Scottish born star. Shevchenko isn’t competent on the ground when it gets down there, which we highlighted in more detail in our preview for the fight. We also know that O’Neill is particularly strong in this area and the fight itself was very much set up for O’Neill to showcase her skills.

With that being said, it’s important to remember that O’Neill is still only 23 years old and still has a lot of room to grow. With three finishes in the UFC already, she’s certainly one to keep an eye out for going forwards. She has claimed the biggest scalp of her career with her win at UFC Vegas 38 and will be looking to take that momentum into 2022.

Going forwards, expect to see a number next to Casey O’Neill’s name on Monday. She’s more than deserving of a ranking, especially when considering the rest of the division. From #15 to #10 the division goes #15, Montana De La Rosa, #14 Miranda Maverick, #13 Maycee Barber, #12 Andrea Lee, #11 Roxanne Modafferi and #10 Alexa Grasso.

Maycee Barber has been ranked since her impressive three-fight finishing streak and Maverick made the rankings following just two wins, of which just one was a finish. Casey O’Neill has certainly looked better than Maverick did in her first two bouts and many could argue that she’s also impressed more than Barber did.

The next logical fight would see Casey O’Neill face off against either a ranked opponent or someone on the brink of the top 15. A fight against Molly McCann could make sense. The UFC could promote it as a battle of Britain between the English, McCann and Scottish, O’Neill. McCann has been ranked previously but fell on hard times. Having dropped two decisions, McCann bounced back with a decision victory Ji Yeon Kim last time out. 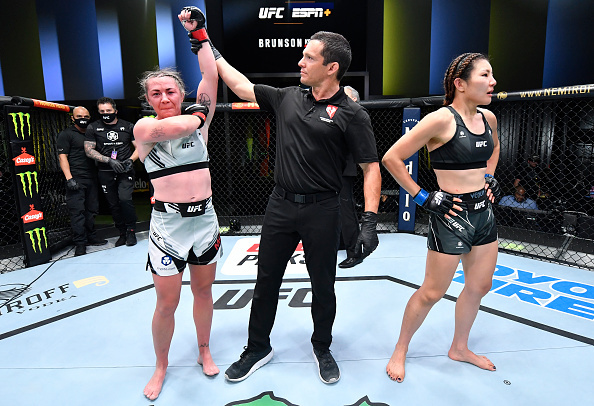 LAS VEGAS, NEVADA – SEPTEMBER 04: Molly McCann of England reacts after her victory over Ji Yeon Kim of South Korea in their flyweight fight during the UFC Fight Night event at UFC APEX on September 04, 2021 in Las Vegas, Nevada. (Photo by Jeff Bottari/Zuffa LLC)

If the UFC choose to go down the route of giving O’Neill a ranked opponent next, Roxanne Modafferi makes the most sense. Modafferi is very much the veteran at 39 with 44 professional bouts with O’Neill only having eight under her belt and it could highlight a changing of the guard. The UFC have gone down the route of giving Modafferi a hot prospect before when she faced Maycee Barber. Modafferi was able to get the W in this one and stunt the progress of Barber. With Modafferi only having competed at UFC 266 last week, the timelines work out too. This is the fight to make without a doubt.

The future is bright for Casey O’Neill and MMASucka will be going along the journey with her the entire way!