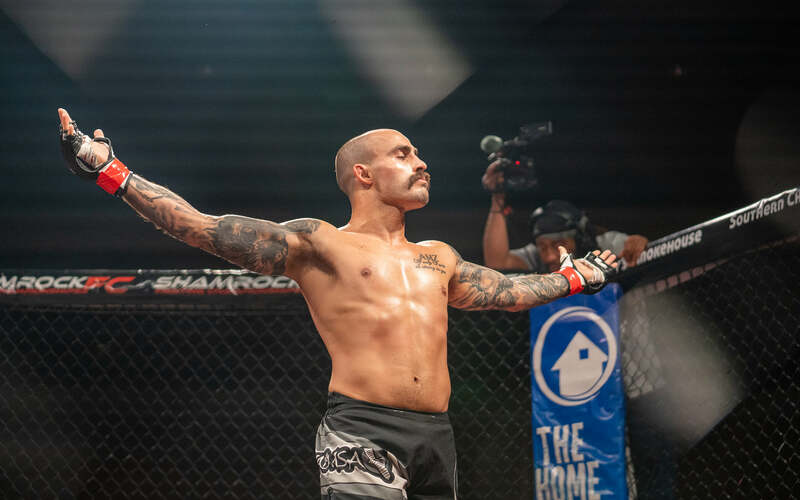 “The Albanian One” is calling for a first-round knockout over King when the two meet for a featherweight scrap.

Zekthi showed that killer spirit in his last performance: a 100-second Von Flue choke over Dillon Tolbert at Shamrock FC 329 in June. Zekthi believes that before the Tolbert win, he was trying to force certain in-fight maneuvers.

“Then I realized all I’ve gotta do is show the guys the door and they’ll walk through themselves,” Zekthi explained. “What I’m going to do with King is, I’m going to set him up. I’m going to take that first minute of the first round – I’m not going to try to knock him out with every shot – I’ll set him up. Then when I put him away, everyone is going to be like, ‘God damn.’ That’s what I want. I want the ‘Oh shit’ moment of the night. ‘Ohh shit, Erion just did it.’”

Zekthi believes King’s style is conducive to him scoring a knockout over his opponent, as he said King is someone who will stand in front of him and throw bombs. He said he would welcome that with open arms.

“I hate this notion that I’m this ground guy, or that I’m the Jiu-jitsu wrestler guy,” Zekthi said. “I train everything. I put so much time into every facet of my game. I don’t want to be known as the striker. I don’t want to be known as the wrestler or jiu-jitsu guy. All of my finishes have come by submission because that’s where the fights have lent themselves. But if you look at the fights where I’ve ended them by submission, all of them were pre-cursed by striking.”

Zekthi has submitted Tolbert, Trevor Ward and Jordin Collins. His two other wins have come by decision. He knows that to prove to people he has knockout power, he needs to score a finish via strikes.

“The frustrating part about that is, every single one of my fucking opponents wants to talk shit about, ‘Oh, he takes you to the ground’ and all that stuff. And then they shoot. Fucking Jordan Collins, Dillon Tolbert, Scott Ettling. Even Trevor Ward. These guys want to sit there and say, ‘Erion’s this ground guy’ and then the fight transitions to the ground.”

Zekthi scored a split decision against Ettling in what was predominantly a ground fight; Zekthi largely using his top control to neutralize Ettling’s jiu-jitsu off his back.

Zekthi does not dislike the ground fight and admitted that is probably his best area.

“What I dislike is this pseudo-bullshit psychological warfare where guys are like, ‘Erion is boring. Stand and bang, bro!’ And then the fucking fight comes up and they shit their pants. It’s just a little fucking annoying.”

Zekthi said he respects King’s abilities as someone who was a Division I All-American wrestler, is very strong, explosive and an athletic specimen. He also said King has fought tough competition in his losses.

The Missouri native promised he is not overlooking King heading into the bout. He admitted the last time he overlooked an opponent, Demetrius Wilson, he lost a split decision. With 100% of his focus on King, Zekthi believes he can put him away in a spectacular fashion.

“I think I’m special,” Zekthi said. “I think I’m great. I think I am the full package of everything you would want in a fighter. I’m not just athletically gifted by God. I work hard. I have a multi-faceted skill-set. I am not bad in any aspect of fighting.”

Zekthi has been looking for a shot with the UFC, though he admitted he isn’t sure if it will come after this fight, even if he brutally knocks King out.

Even if the winner between Zekthi and King gets a title shot – though Zekthi is a natural bantamweight – Zekthi only cares about the Shamrock belt as a means to make him more appealing to the UFC. In fact, Zekthi said he doesn’t care about belts, money, venues, experience or fame.

Fighters are only as good as their last bout, Zekthi said. And when the 28-year-old is 40 and done with the fight game, he knows the newer generation of fans won’t know who he is.

“There are MMA fans today who don’t know who Anderson Silva or Georges St-Pierre are, because they started watching MMA during the Conor McGregor era. There will be guys in five or six years who don’t know who Khabib [Nurmagomedov] is. What stays is the legacy. No one remembers a champion from six, seven, eight years ago. But etching your achievements in stone; that is forever … I don’t give a fuck about anything other than winning fights. That’s it. That’s all I care about.”

Having signed with LCA Management, Zekthi hopes a win over King will get him to the UFC’s proving grounds: a place where he can compete with the cream of the crop of the best bantamweights on earth.

He believes the UFC would love to have him.

“I might be young in the game, but I speak like I’ve been here forever. I speak like I have balls of steel. When have you ever seen me shy away from the moment or not put the spotlight on myself? I’m a promoter’s wet dream, and I know it. There’s a reason why I’ve fought for Shamrock FC so many times and there’s a reason why they’re so eager to do business with me. And there’s a correlation between sold-out shows and an Erion Zekthi fight, I’m just saying.”

Shamrock FC will surely be looking to sell out the Ameristar Casino in St. Charles, Missouri, on Saturday, Oct. 23, when Zekthi and King meet. Shamrock FC 333 is set to air live on FITE TV at 7:30 p.m. EST.