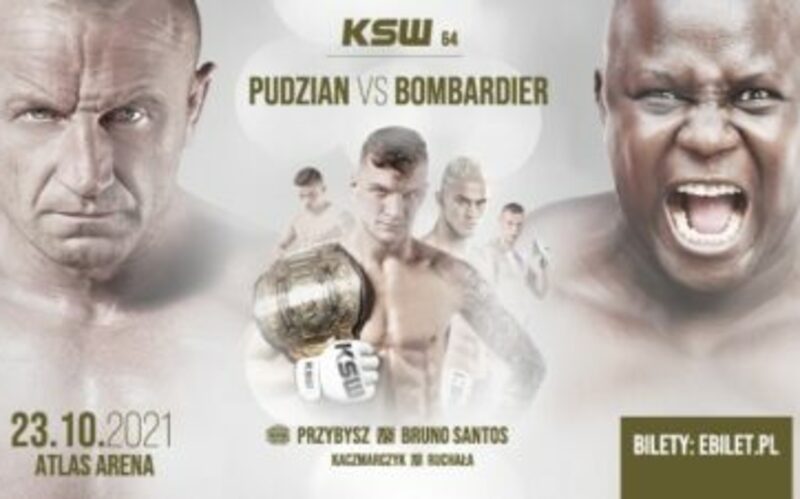 The time has come for KSW action to return to Poland with KSW 64: Pudzianowksi vs Bombardier live this Saturday at 2pm ET/11am PT on KSWtv and the KSW app. The main event will feature long-time KSW heavyweight veteran and World’s Strongest Man winner Mariusz Pudzianowski as he takes on KSW newcomer, the 330lb Serigne Ousmane Dia. The night’s co-main event will feature the first bantamweight title defense for Sebastian Przybysz as he faces Bruno Santos. Former FEN and Babilon MMA featherweight champion Daniel Rutkowski will take the step up to Poland’s largest organization and face a very tough task in Filip Pejic.

After being pulled out of the initial contest just hours before the main event was set to take off, Bombardier is ready for his KSW debut against one of Poland’s most seasoned veterans. Though he is only 2-0 in MMA and lacks the experience for such a task, Dia greatly makes up for in Senegalese Wrestling. He is considered one of the top-tier greatest to ever compete in the sport. Standing at 6’6″ and weighing in at nearly 330-lbs, Dia will be one of the very few men to stand toe-to-toe with Pudz on a physicality scale.

After earning the KSW bantamweight championship at KSW 59, Sebastian Przybysz is set to make his first title defense against Bruno Santos, who is currently 1-1 inside the KSW cage. Coincidentally, Santos’ lone KSW loss came to the hands of Antun Racic, the man Przybysz defeated for the title. With the champion showing a knack for the finish, he is able to win the bout a number of ways, four of his eight professional wins have come by KO/TKO while three have come by decision.