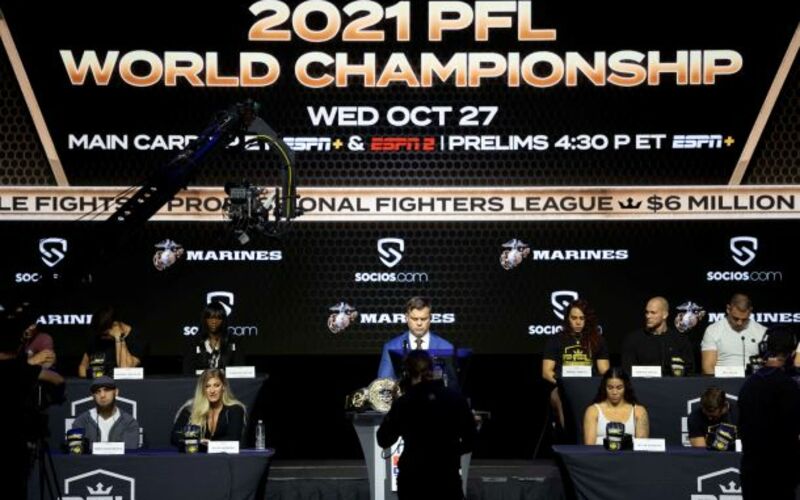 The 2021 PFL season concludes Wednesday night with a stacked 10-fight card and $6 million on the line at the Seminole Hard Rock Hotel and Casino in Hollywood, Florida. The card is home to six championship bouts and MMASucka will cover the entire card.

The lightweight title is on the line in the headliner of the preliminary card, as Titan FC veteran Raush Manfio (14-3) and 2019 PFL Lightweight finalist Loik Radzhabov (15-3-1) face off. Before that, the light heavyweight championship is up for grabs when former UFC three-division competitor Antonio Carlos Jr. (12-5, 2 NC) fights Cage Warriors veteran Marthin Hamlet (8-2). Also on the preliminary card, recognizable names such as former Strikeforce and Bellator featherweight champion Julia Budd (15-3), former UFC middleweight contender Omari Akhmedov (21-6-1), and former UFC prospect Don Madge (9-3-1) will all be making their PFL debuts.

One of the most dominant martial artists on the planet, Kayla Harrison, returns Wednesday night in hopes of regaining PFL gold. In her three PFL 2021 bouts, she’s scored three first round finishes and calculated just over 10 minutes in the PFL smart cage. Considering her grappling prowess, expect her to have an advantage on the ground, as she does in all her fights. In her 12th pro bout on Wednesday, she is expected to close at a 30/1 favorite. The 2-time Olympic gold medalist in Judo is nothing short of a superstar and looks to prove she is one of the best in the world once again.

California’s Guardado, who now resides in Las Vegas, looks to make it four straight victories in her biggest opportunity to date. After a tough loss to Dana White’s Contender Series veteran Taneisha Tennant in her pro debut, the 30-year-old proved her resilience and bounced back. In her three PFL 2021 bouts, she put together a trio of decision wins, two in convincing fashion. Guardado is more experienced than many notice considering her amateur wins over Raquel Pennington and Ashlee Evans-Smith. Not to mention, her lone amateur loss was to Ronda Rousey back in 2011. It might be in her best interest to stay on the feet in this one, however, that is easier said than done against the likes of Kayla Harrison.

In the second of two sequel tournament final bouts on the card, Ray Cooper seeks revenge, however, it will not be easy against the streaking Russian. In the PFL welterweight tournament final back in 2018, these two met in the main event. Although Cooper put up quite the fight, Magomedkerimov earned a second round submission win and the 2018 PFL welterweight championship. In 2019, the two were scheduled to meet once again, but the Russian was forced to withdrawal from the tournament just before the semifinal due to an illness. Cooper would eventually go on to win the 2019 PFL welterweight championship. When the 2021 PFL welterweight roster was announced, it was almost ineviatble these two would cross paths once again and that day has finally come.

Russia’s Magomedkerimov is sporting a 14-fight win streak and hasn’t tasted defeat since early 2015. In fact, he has never lost a fight in the entirety of his PFL career and holds wins over John Howard, Curtis Millender and Sadibou Sy. Cooper, on the other hand, has been red hot winning five in a row, three of which came by way of finish. The Hawaiian has earned victories over Rory MacDonald, David Machaud and Jake Shields. In a battle between two former PFL champions, there can only be one double champ and fans will find out who earns that title on Wednesday night.

In the main card’s lone non-title bout, the greatest women’s boxer on the planet makes her return to the PFL Smart Cage. Shields is one of the last female martial artists one would want to stand and bang with, and surely Montes is aware of that. She parlays hand speed with devastating knockout power as she displayed in her pro MMA debut against Brittney Elkin at PFL 4 2021. Doing her training at Jackson Wink in Albuquerque, New Mexico, it is no secret she is getting some of highest level coaching in MMA. Also, she works with some of the most quality women’s martial artists on the planet in the likes of Holly Holm, Michelle Waterson and Arlene Blencowe. With that being said, the 2-time Olympic gold medalist is in for a tough test with Mexico’s Montes.

The 21-year-old is by no means an easy fight for the boxing champ, as she is quite the proven martial artist. Although she’s stepping up two weight classes for this bout, she earned a convincing win over PFL veteran Claudia Zamora in her pro debut and secured a dominant finish in her second pro bout. Montes has shown her ability to out-grapple her opponents and use her forceful ground-and-pound game to her advantage. Expect her to use that in this fight with Shields, as it might be in her best interest.

The prelims will be streamed live on ESPN+ starting at 4:30pm ET/1:30pm PT, followed by the main card which be broadcasted nationally on ESPN 2 at 8pm ET/5pm PT.

Featured Image courtesy of the PFL