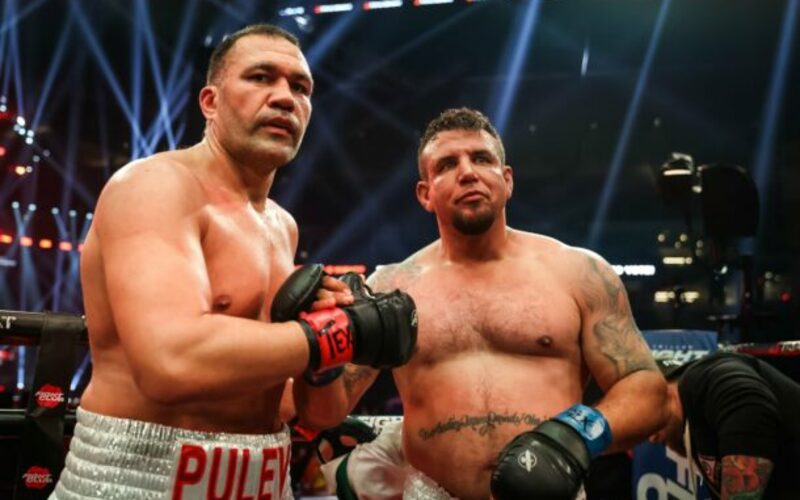 A night that no one was quite sure would happen ended up being a fun show, well-paced, and an overall enjoyable experience. Triad Combat took an interesting ring aspect of using triangle and a music act in Metallica and actually made a good event come out of it.

They even had nothing bad or regrettable happening until the main event.

In a bout that puzzled many from the moment it was announced, Kubrat Pulev proved that Frank Mir needs to be done with combat sports. From the moment the bell rang, the speed differential between the two was evident, with Pulev looking like a Lightning McQueen and Mir like Mater.

The fight would come to an end in one of the most uncomfortable finishes in combat sports recently.

What in the hell was Dan Mirgliota waiting for here?! He was clear as day out on his feet!

Frank Mir does not need to be booked for these things anymore, too much damage being taken. #TriadCombat pic.twitter.com/qPFATdgffW

Dan Miragliotta and his hesitation to step in at the end is despicable and nearly set up Mir for worse damage than he had already sustained, it is a shame that is the main event we got after a night of rather fun fights.

In the co-main event, Alexander Flores and Matt Mitrione battled in a fun back-and-forth fight that saw Mitrione drop Flores in round one before he battled back to earn a controversial unanimous decision from the judges. Mitrione showed solid defense and decently-improved boxing skills in the meantime and fought with almost free feeling based on how he was flowing.

A big flury and a beautiful uppercut from Matt Mitrione drops Alexander Flores in round two. #TriadCombat pic.twitter.com/60X0qgea1G

Credit to Flores, though, because he very well could have been done in round one, but he was able to fight back with bodywork to earn the decision and to be just in the conversation for a win was impressive in itself.

The whole reason we got the “show” of Shannon Briggs and Rampage Jackson was because of the MMA vs. Boxing angle that Triller worked and ran with. It seemed as though that the boxers all night were in favorable matchups, but when the dust settled MMA made a lasting impact on those who watched.

Fighters like Mike Perry, Derek Campos, and Albert Tumenov all looked uber-impressive in decision wins against well-versed boxing talent. Perry was able to get inside the long Michael Seals and work his way to a split decision win that came to “Platinum”‘s surprise it seemed. Campos may have been the most impressive of the bunch by completely outboxing Brian Vera, and even dropping Vera at one point on as clean a left hook as you may ever see.

Derek Campos DROPS Brian Vera in round one! Come for the hook, stay for the Bas Rutten commentary. #TriadCombat

Campos would earn a unanimous decision win in what is probably the biggest win of anyone on the entire card tonight.

To round out the memorable performances, Albert Tumenov was able to outwork former Roy Jones Jr. opponent Scott Sigmon, and looked primed for a real fight sooner than later. The former UFC fighter improved to 6-0 since being cut by the UFC, with three of those wins coming by way of knockout.  Scott Coker or Dana White need this guy on a big-time roster again ASAP.

In the first finish of the night, Glory MMA and Fitness product Alexa Culp blitzed boxer Angelina Hoffschneider to win by referee’s stoppage in under a minute, while the boxers got on the board first with Harry Gigliotti scoring a split decision victory over Jacob Thrall.