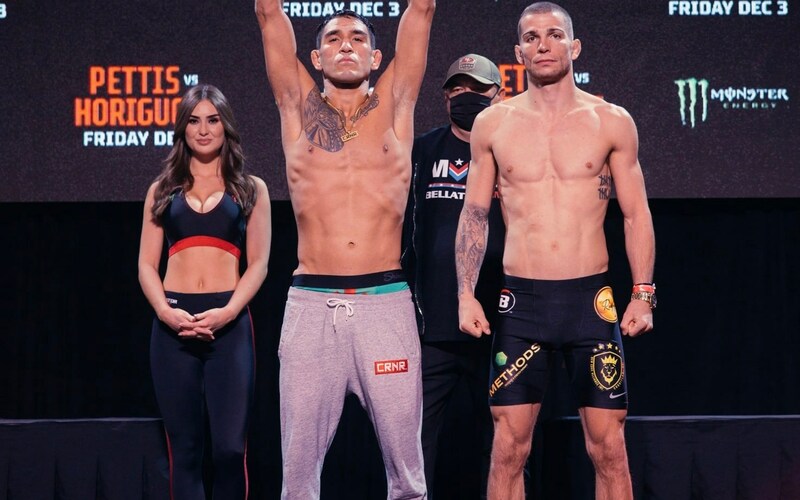 Just a few weeks remains in the calendar year, and only five fight cards remain for our MMASucka staff picks.

Bellator 272 will take place in just a few short hours tonight, December 3 from the Mohegan Sun Arena in Uncasville, Connecticut. This marks the promotion’s final event of 2021; its next fight card and location yet to be determined. Tonight’s main card will kick off at 10:00pm ET (7:00PM PT) live on Showtime.

Tonight’s card also comes as the final-double header for our staff picks this year. Stay tuned to MMASucka Saturday afternoon for our UFC Vegas 44: Font vs. Aldo picks from Las Vegas.

A highly-anticipated title fight is in store for the promotion’s bantamweight (135 lbs.) divisional title between current champion Sergio Pettis and challenger Kyoji Horiguchi.

Pettis has made the most of his incredibly short Bellator tenure having three wins including his title-winning, May decision over Juan Archeulta inside a two-year span. The youthful 28-year-old Roufusport talent looks to continue his blooming success in hopes a fifth straight victory and a 22nd in his professional career. Pettis’s opponent, Horiguchi, returns after a near-year layoff, lasting leaving fans with a vengeful rematch knockout of Kai Asakura. A win tonight for the current RIZIN champion and former Bellator title holder would be his 15th in his last 16th fights, the Japanese talent making a case as one of the greatest flyweights in MMA history.

Featherweights (145 lbs.) Emmanuel Sanchez and Jeremy Kennedy will clash in the co-main event. Two-time title challenger Sanchez aims to get back to his winning ways after two defeats this year to prior-champion Patricio Pitbull and Mads Burnell. Battlefield Fight League and UFC veteran Kennedy looks to bounce back following his third-ever professional loss to Hungary’s Adam Borics in April.

Two other fights compose the main card including Ontario’s Josh Hill and the undefeated run of Johnny Eblen against their respected opponents. Find our main card Bellator 272 picks further below.

The WINNER of staff picks in 2021 will have a choice between receiving a custom-made championship belt from ProAmBelts or a chain from Championship Chains. A winner is determined simply by the individual correctly picking the most victorious fighters at the year’s end. For the third straight year, Michael DeSantis captured the 2020 victory compiling a record of 201-88.

Find out below who the staff are picking at Bellator 272: Pettis vs. Horiguchi. 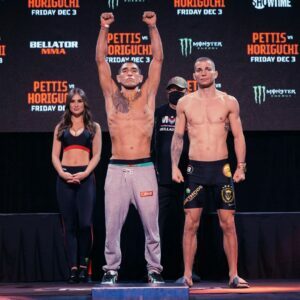