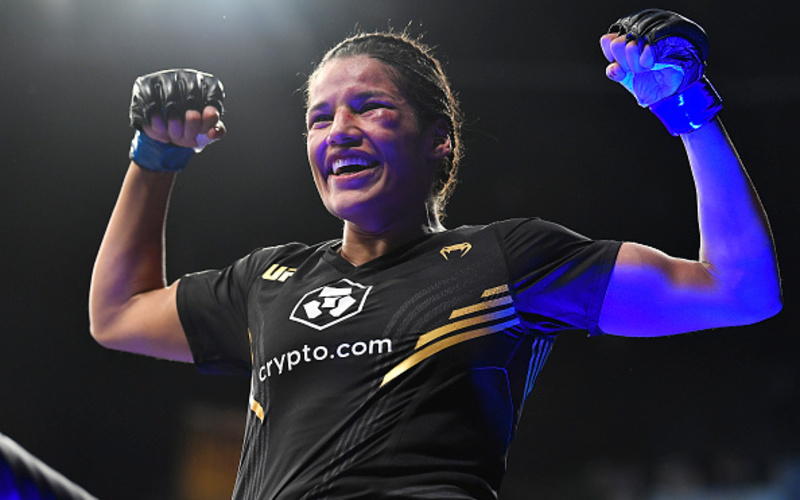 In what may very well go down as the biggest upset in UFC history, Julianna Pena proved everyone wrong when she did what she promised by taking the fight to Amanda Nunes and submitting the champion in the co-main event of UFC 269.

The first round saw both women trying to enforce their will upon the other, but it ended with Amanda Nunes getting control on the ground with her top game and Pena working on the bottom. While she did not do much offensively, Pena was able to hold Nunes in place and her corner did not hesitate to remind her between rounds that it was the exact position they wanted her to be in.

In round two, however, an absolute war broke out and both women threw with reckless abandon. Nunes was the first to drop Pena, but she was unfazed by it and got right back up, bringing it to the champion. It was that fearless approach that may have broken the champion.

Nunes and Pena would start to trade blows back and forth, with Nunes cracking her in the left eye with a straight right that resulted in immediate swelling above and under her eye. She would attempt to swarm Pena, but Pena would counter with straight and hooks of her own and then rocked Nunes and sent her to the ground after some back and forth.

Ultimately, Nunes would almost collapse from a combination of exhaustion and being rocked, and Pena wasted no time taking her back. When she took her back, she did not hesitate to lock in a choke.

The choke did not look completely in, and it seemed when Amanda Nunes tapped it was from just being done with the fight. This makes the whole performance that much more impressive by Pena.

She told everyone who would listen that she would take the fight to Nunes, and she did. It was something no one had ever done before with the women’s GOAT, and Nunes did not know how to handle it. A rematch is obviously going to be the first thing on the UFC’s mind, one would imagine. It will be interesting to see what adjustments are made by both women.