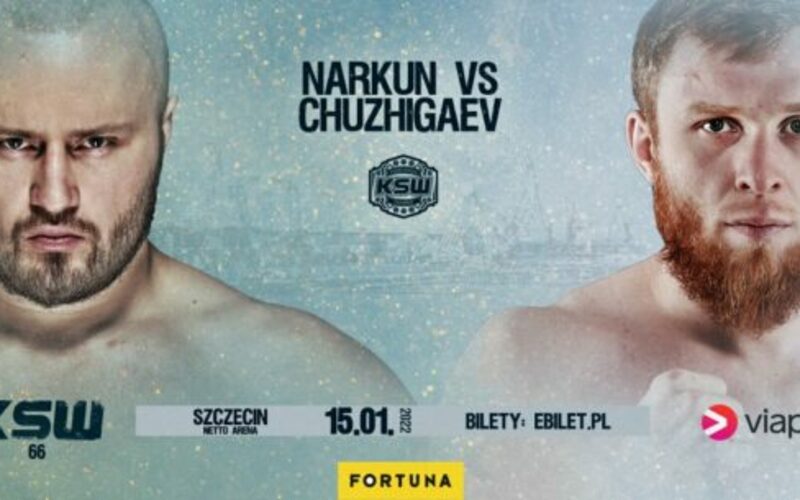 KSW light heavyweight champion Tomasz Narkun will have his sixth title defense in January at KSW 66. He will take on a new challenge presented by Ibragim Chuzigaev. The promotion announced the matchup on their social media pages today.

In his last fight at KSW 60, Narkun tried for the second time to dethrone current heavyweight champion Phillip De Fries and become a two-division champion in the process. In their first matchup, De Fries picked up a decision victory. This time, De Fries punched Narkun into submission at 3:37 of the second round. Before that, “Giraffe” was on a two-fight winning streak as he defeated Przemysław Mysiała and Ivan Ersian. Despite his failed tenure in the heavyweight division, Narkun stays on top of the light heavyweight hierarchy as none of his fights have exceeded two rounds.

Chuzigaev is an Absolute Championship Akhmat veteran who has a 15 – 5 record, and this bout with Narkun will serve as his KSW debut. He is on a six-fight winning streak and has only lost once in his last 12 fights. Eight of his victories have come by way of knockout, and two have come by submission. He has defeated such names as UFC veterans David Mitchell, Alex Garcia, Mike Rhodes, KSW veteran Piotr Strus, and Igor Svirid, amongst many others.

KSW 66 will take place at Netto Arena in Szczecin, Poland on January 15th. In the main event, lightweight champion Marian Ziółkowski will defend his title against Borys Mankowski. Also, Szczecin’s own former KSW middleweight titleholder Michał Materla will be making his return. Other fighters with ties to the city, such as Tomasz Romanowski and Rafał Moks, will also be in action.