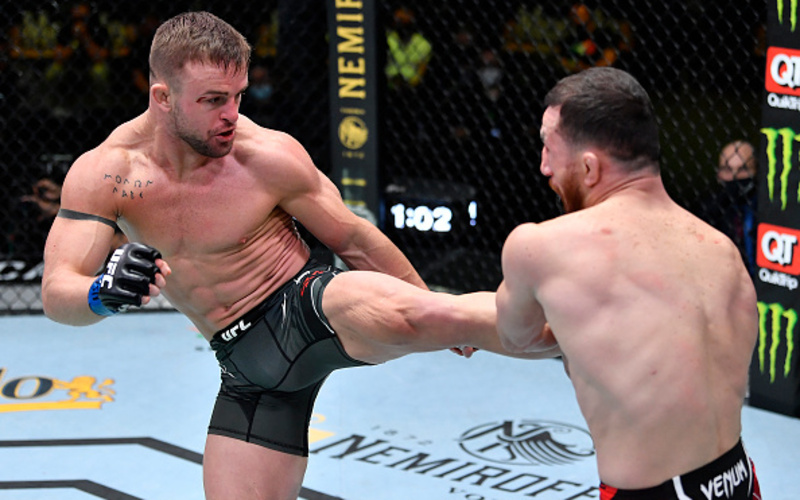 Stamann believes Nurmagomedov is a good match-up for him and that he has the strength of schedule advantage.

“I just don’t see how he can beat me, honest to God,” Stamann told MMASucka. “I don’t see a path to victory for him. The guy can’t take me down and beat me up. He’s not going to be able to outwork me in a fight. He’s going to have to land that big shot. I think in 50 fights, no one has been able to do it. I don’t see him being the guy who can. I don’t think he sets things up well enough to be able to catch me with something big. Yeah, if you could pick a match-up for me, Said would be towards the top.”

Nurmagomedov’s lone loss in the UFC came to Raoni Barcelo via unanimous decision in December 2019. He has wins over Justin Scoggins, Ricardo Ramos and Mark Striegl. Stamann said Barcelos fought Nurmagomedov pretty well, but he feels he can take what Barcelos did to beat Nurmagomedov and expand on it.

“I don’t think Barcelos’ game plan was necessarily great,” Stamann said. “I think Barcelos made a lot of mistakes in that fight. The fact that he closed the distance, didn’t give Said space to do the things and set up the things that he wants. [Nurmagomedov] is one of those guys who needs an ample amount of space to do the techniques he’s good at. Barcelos didn’t even crowd him as much as he stood his ground. I think I can take what Barcelos did, polish it up, and make it look a lot better and make this a fight that won’t even be close.”

Nurmagomedov is not related to former UFC lightweight champion Khabib Nurmagomedov, but Stamann said there is still name value in defeating someone from Dagestan.

“Those guys have huge followings,” he said. “The fact that his name is Nurmagomedov, people will make the assumption that he’s one of Khabib’s guys. I think there’s a lot of value in beating him. That’s kind of the same for everyone, but it’s different for the Russian guys. For guys in the U.S. to start being the Russian guys, it just doesn’t happen very often. It takes a certain type of athlete who is a very high-level wrestler to beat one of those guys, and I happen to be one of the dudes in the U.S. who has the ability to take out the Russian dudes.”

For the first time in his MMA career, Stamann is looking to snap a two-fight losing streak. He fell by unanimous decision to Merab Dvalishvili and Jimmie Rivera, with Dvalishvili being the No. 6-ranked bantamweight in the world. Stamann believes the feeling of one’s back being against the wall is something that breaks a lot of athletes but said he thrives against pressure.

“Good athletes overcome that sh–, and great athletes thrive in that environment,” Stamann said. “When the chips are down. Let’s be honest: I was never supposed to be where I am today. I was never supposed to be a top-10 or top-15 fighter. All that stuff was out of the cards for me, but I made it happen. I don’t see any break in my will. I don’t think this is the toughest thing I’ve dealt with in my MMA career. Just getting to the UFC was f—ing really hard. And me coming from the Midwest where nobody really, really, makes it, or makes it to the top. And nobody has the success that I’ve had where I’m from. I’ll continue to defy the odds and make sh– happen when I have to.”

Stamann’s only other UFC loss came to the 135-division’s current champion, Aljamain Sterling. Stamann has earned wins over the likes of Bryan Caraway, Brian Kelleher and Tom Duquesnoy.

With a draw that many felt he won against Song Yadong and having given Sterling and Dvalishvili tough fights, Stamann’s abrupt removal from the UFC bantamweight rankings came as a surprise. And “The Spartan” is not happy about it.

Stamann said he doesn’t “give a sh–” what the fans and rankings committee thinks of him, and that he wants to prove to himself what he’s capable of in one of the deepest divisions in the world.

“I know that I’m one of the best. I’m going to make sure there are no doubts when this is all over that I was absolutely one of the best bantamweights to do this. Whatever the UFC and the fans and anybody thinks is f—ing irrelevant. The reality is, I’m the one who has to believe I’m capable of doing these things, and if I believe it, it’s just going to happen.”

The next stop on Stamann’s path is a showdown with Nurmagomedov, a prospect many fans are behind. The Michigan native believes the pressure he brings will be enough to push him past the Dagestani.

“He’s either going to break, and I’m going to finish him, or it’s just going to be a tough night for him and he’s not going to be able to get things done that he’s been able to do to other guys. This is the first time that Said has fought somebody who’s a better-ranked guy who’s no longer a ranked guy, but who is a top-10, top-15 fighter in the UFC, so I think Said is going to realize there are levels to this f—ing game, and I’m above his.”