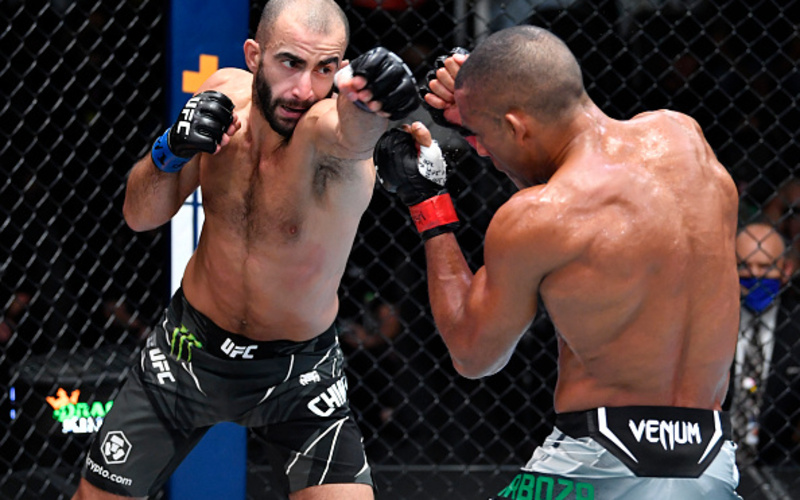 The UFC returns to Las Vegas on January 15th with another Fight Night event, there are some fun match-ups on paper, but no real star power on the card.

The main event of the evening and a bout most fight fans are looking forward to, #5 featherweight Calvin Kattar faces #8 featherweight Giga Chikadze in what is expected to be a real barn-burner.

Calvin Kattar is coming off his decision loss to Max Holloway almost a year ago now. He comes into this fight with the notable advantage of spending more time in the UFC’s octagon than his counterpart. Going the full distance in main event fights back-to-back, Kattar showcased his amazing cardio and toughness in both. His biggest weapon is his jab, which he uses masterfully in all of his fights to get his opponents to leave themselves open for his bigger shots.

Now on a 9-fight winning streak, Giga Chikadze is on everyone’s radar as a possible future UFC featherweight champion. Finishing Edson Barboza in the third-round last time out by the way of punches, Chikadze earned himself his 3rd performance bonus in the UFC. Calling himself ‘the best striker in the featherweight division’, Chikadze has certainly been looking like it recently. Standing at 6’0″, he has a slight reach advantage over his opponent. Possessing a sensational sense of timing and range, Chikadze picks his shots carefully. Each one of his strikes has the potential to end the fight, especially his kicks which can only be described as ‘vicious’.

It will be interesting to see how this fight plays out if it goes further than 3 rounds, as we’ve yet to see Giga Chikadze in championship rounds. Calvin Kattar will need to fight smarter this time around, possibly use his wrestling offensively to drain Chikadze’s gas tank and take some snap off his kicks. Taking an alarming amount of damage in his last fight, we will have a chance to see if that had any effect on his chin or mentality.

Giga Chikadze’s striking will just be too much for Calvin Kattar. You can never count Kattar out though as he is as tough as they come, and has the power in his hands to knock anyone out.

Prediction: Giga Chikadze by KO/TKO round 4

Other fights on the card include:

Prediction: Brandon Royva by Submission round 2

Prediction: Chase Sherman by KO/TKO round 2

Prediction: Joseph Holmes by KO/TKO round 1

Prediction: Gabriel Benitez by Submission round 3

Prediction: Viacheslav Borshchev by KO/TKO round 2