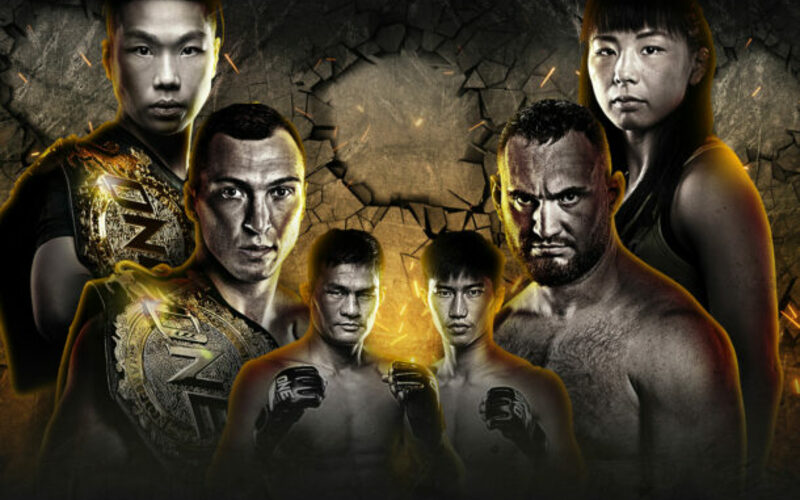 Despite numerous fight weeks changes, ONE Championships debut card for 2022 is on to restart the MMA beat in Asia. Eight fights across three disciplines line the card, capped off by Xiong Jingnan defending her 125lbs title against Ayaka Miura. MMASucka provides live ONE Heavy Hitters results below.

Xiong Jingnan (16-2) has become one of the most dominant champions ever in ONE Championship. She’s torn through five title defenses and knocked out solid fighters like Angela Lee along the way. It appears that she’s beginning to run out of opponents in ONE, as she’s beaten every ranked fighter in the division except one- Ayaka Miura.

Miura (11-3) certainly knows how she wants the fight to go- she wants to feel Xiong’s open palm tapping to a submission. She’s won eight of her eleven wins by submission, all of her four victories in ONE via some form of Americana. A veteran of DEEP JEWELS and Pancrase,  Miura is the definition of a “specialist”.

Xiong Jingnan has faced plenty of talented grapplers in her tenure (Michelle Nicolini and Laura Balin), but will TRIBE TOKYO’s Akaya Miura have the gameplan to succeed where others failed? Watch and see.

The Rest of ‘Heavy Hitters’

Check out the rest of the card below, which features a Muay Thai co-main event pitting Saemapetch against Tawanchai. Highly-regarded Saygid Izagakhmaev (19-9) also makes his ONE debut, cornered by Khabib Nurmagomedov. On the prelims, Meng Bo (17-5) moves up a weight class to fight a former two-time title challenger in Tiffany Teo (9-2).

Muay Thai: Tawanchai def. Saemapetch via KO at 2:55 of round 1

Saygid Izagakhmaev def. James Nakashima via Submission (D’Arce Choke) at 2:17 of round 2

Senzo Ikeda def. Elipitua Siregar via TKO (Punches to the Liver) at 2:00 of round 3

Kickboxing: Giannis Stoforidis def. Beybulat Isaev via KO (Left Hook) at :31 of round 1

Tiffany Teo def. Meng Bo via Submission (Rear Naked Choke) at 3:45 of round 2

Shuya Kamikubo def. Troy Worthen via Submission (Rear Naked Choke) at 4:36 of round 3