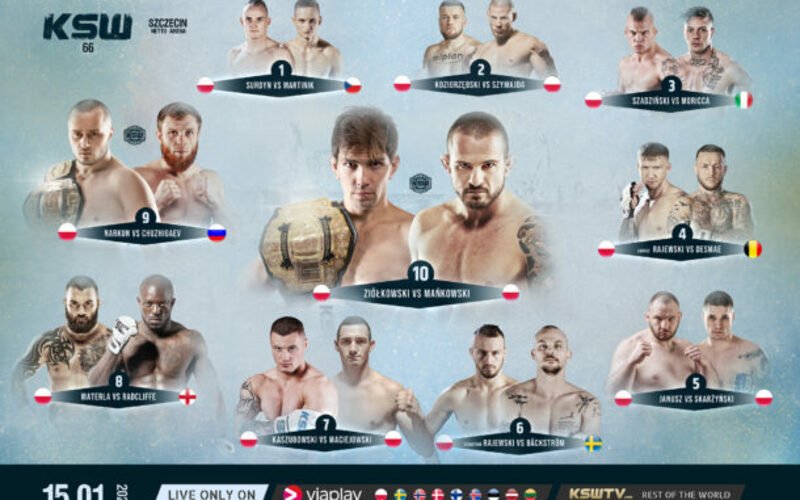 KSW is set for its first event of 2022 with KSW 66 taking place Saturday, January 15, 2022, from Szczecin, Poland. The event will feature two championship bouts in which light heavyweight king Tomasz Narkun will defend his light heavyweight championship against a dangerous striker in Russia’s Ibragim Chuzhigaev. The night’s main event will feature lightweight champion Marian Ziolkowski defending his crown against former welterweight champion Borys Mankowski. The event can be seen worldwide on Viplay or State-side on KSWtv.

Earning the vacant lightweight title at KSW 57 in December 2020 via fourth-round TKO, Marian Ziolkowski will make his second title defense in Saturday’s main event. With only one appearance in all of 2021 (a second-round submission victory at KSW 60 in April 2021) hopefully, we will see Ziolkowski a bit more active this year, especially kicking off his 2022 campaign in January. With 23 wins in his professional career, Ziolkowski always puts on a show for fans with 19 of those wins coming by a finish, 13 of those coming by submission. Looking for his second different championship in KSW, Borys Mankowski will return to action after taking 2021 off from MMA, only competing once in a boxing bout with former KSW and UFC fighter Norman Parke in October. The former champion does enter the contest on a three-fight winning streak including his most recent performance being a decision win over another former champion in Artur Sowkinski at KSW 57 in December 2020.

Easily one of the pound-for-pound best representing Poland, Tomasz Narkun will make his first title defense since he took his second shot at the heavyweight crown of Phil de Fries at KSW 60 in April 2021. With de Fries his only losses since 2014, Narkun has racked up 10 victories in the KSW cage since his organizational debut at KSW 27 in May 2014. Two of those victories came against a KSW icon in Mamed Khalidov. Looking for his chance to take over the division, Russia’s Ibragim Chuzhigaev will take his six-fight winning streak into the KSW cage for his debut, no less, against one of the most dominant light heavyweights ever in KSW history. The former ACB/ACA star has earned stoppage victories in 10 of his career 15 fights including his last two performances. Chuzhigaev has faced big competition in ACA but no one quite near the calibre of Narkun.

Two title fights were made official as champions and challengers all made weight. KSW lightweight champion Marian Ziolkowski (23-8-1) defends his title against former welterweight champion Borys Mankowski (22-8-1) in the main event while light heavyweight king Tomasz Narkun (18-4) welcomes the challenge of Russia’s Ibragim Chuzhigaev (15-5) in the co-main event.

We will also see the return of former middleweight champion Michal Materla (30-8) as he faces dangerous Jason Radcliffe (17-8) and the Rajewski brothers, Sebastian (11-6) and Lukasz (11-6), are in action again taking on Sweden’s Niklas Backstrom (11-3) and Belgium’s Donovan Desmae (14-7), respectively.

There is also a late change to the fight card after Tomasz Romanowski was forced to withdraw due to medical reasons and is replaced by Robert Maciejowski (5-3-1) against Krystian Kaszubowski (9-2).