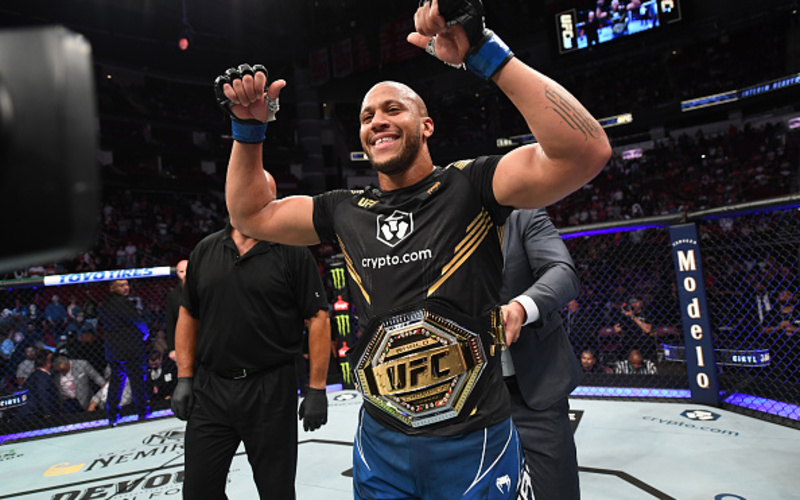 Ciryl Gane is set to clash with the heavyweight champion, Francis Ngannou at UFC 270 for the undisputed strap. As we know, with a massive 16 finish victories in 16 wins, of which 12 are knockouts, Ngannou’s power is scary. His one-punch knockout power is like few we’ve ever seen in the UFC thus far. The Predator’s ability to land in chaotic situations leads to a number of his finishes. The Alistar Overeem, Jairzinho Rozenstruik and Cain Velasquez knockouts show just how effective he is in these chaotic exchanges.

His next opponent, Ciryl Gane rarely gets himself into these ‘chaotic exchanges’ as he’s such an impressive technician. He has a striking defence of 62% and he doesn’t have to worry too much about the takedown threat from Ngannou although still has a takedown defence of 100%. The most strikes he’s absorbed in a fight was over 25 minutes against Alexander Volkov. He absorbed 115 strikes, an average of 23 per round. We take a look at Gane’s keys to victory, his defence and how he can capture the belt at the blockbuster UFC 270.

Gane’s style lends itself very well in avoiding strikes. He’s constantly on his toes, looks to only land when it’s safe to do so and also sets ‘outs’ after landing. This means that he already predicts what his opponent is going to counter with when he throws thus being able to avoid the strike. A brilliant example of this was when he faced Jairzinho Rozenstruik.

We can see here how he lands a straight before slipping under a potential looping hook counter. This will be a vital aspect of his fight against ‘The Predator’ as Ngannou will constantly look to land in chaotic exchanges. If Gane can anticipate Ngannou’s counters, he will likely be able to avoid them, staying out of danger.

Don’t back up in straight lines

Another of Ciryl Gane’s keys to victory at UFC 270 is that he can’t back up in straight lines. Luckily for fans of ‘Bon Gamin’, he has a style that naturally allows him to be on his toes constantly, allowing him to change direction when backing up and making his footwork unpredictable. We’ve seen Ngannou land big on opponents when they’ve been backing up, which is what happened against Bojan Mihajlovic. The Serbian’s movements were predictable, he all but ran away from Ngannou along the fence, allowing the future champion to land on him and drop him. This again came from a chaotic exchange and predictable footwork.

As we can see when Gane faced Derrick Lewis in his interim title bout in August, Gane can back up whilst still avoiding strikes and constantly cutting different angles. In the snippet below, we can see Lewis look to land two right hands, both of which weren’t thrown with any conviction as he couldn’t guarantee landing on the Frenchman. The defensive movement of Gane in this example proves just how effective good footwork can be.

Derrick Lewis was arguably the best possible opponent for Ciryl Gane to face in preparation for Francis Ngannou. Neither Lewis nor Ngannou have a wrestling base, both men prefer the fight to stay on the feet and both have one-punch knockout power. Going the best part of three rounds with Lewis was a good trial for Gane in his quest to defeat Ngannou.

Getting it to the clinch following a counter

The final key to victory for Ciryl Gane will be to wear down Francis Ngannou by getting the fight into the clinch, initiating wrestling exchanges and looking to constantly land on Ngannou in order to draw out lazy counters. Ngannou’s style lends itself, unfortunately for him, to getting caught by Gane in the clinch.

Gane is effective at getting his opponents into the clinch off counters or when he manages to close the distance within an exchange. We can see against Alexander Volkov that when the two get into a tight exchange, Volkov looks to land a right hook on Gane. Gane slips underneath the attempted strike, uses the momentum of his slip to drive Volkov back towards the fence and initiate the clinch situation. This could be used against Ngannou if Gane chooses to exchange with the hard-hitting champion. He can get him to swing big in an attempt to land of Gane, as Volkov did, before slipping underneath the shot and getting the fight into the clinch.

This was also the case in Gane’s UFC debut against Raphael Pessoa. Pessoa was constantly backed up against the fence and looked to explode and land on the Frenchman. When he was able to get his back off the fence, he looked to rush in and land on Gane with constant head strike attempts. Unfortunately for Pessoa, he was too predictable. A big, telegraphed looping right hand allowed Gane to slip underneath the attempted strike, gain double under hooks and use this leverage to walk the Brazillian back to the fence. This ultimately lead to the arm-triangle finish for Gane.

Getting Francis Ngannou into the clinch using this method of slipping a shot and driving the double under hooks is certainly something that Gane can look to do. Yes, it was easier against Volkov because Gane was able to get under the taller Russian’s stance, however, with Ngannou being the same height as Gane (6 ft’4), Gane will have to leverage the Cameroonian by dropping slightly deeper than he did against Volkov. He was able to do this against Pessoa so there is no evidence that he will struggle against Ngannou.

It’s important to avoid the uppercut counter of Ngannou for Gane when slipping under any hooks in order to try and get into the clinch, however, he will hope that crowding the shots will take the majority of the power out of these strikes, not allowing Ngannou to land clean.