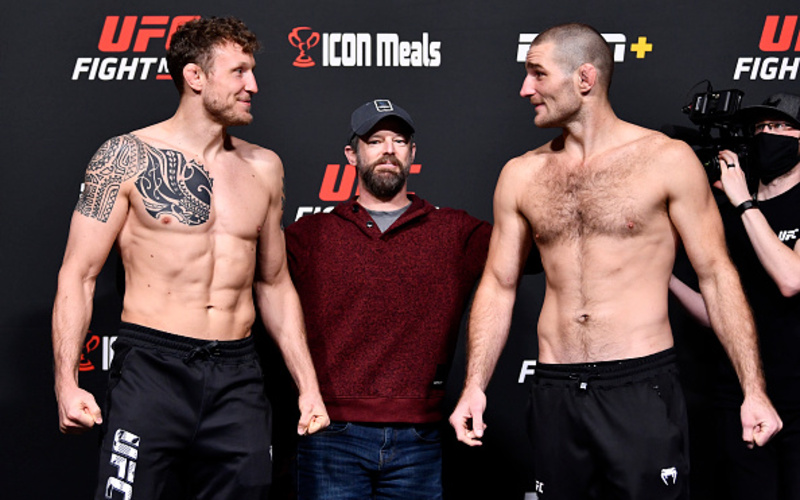 UFC Vegas 47, also titled UFC Fight Night 200 is set to take place shortly at the UFC Apex in Las Vegas, Nevada with Sean Strickland (24-3) facing off against Jack Hermansson (22-6). The prelims are set to begin at 4:00pm ET and the main card is slated to start at 7:00pm ET.

Hermansson is stepping into the octagon for his fourteenth UFC appearance and fourth main event since joining the UFC in 2016. He is coming off a unanimous decision win against Edmen Shahbazyan last may and is currently ranked #6 in the middleweight division. With a win against Strickland who is ranked currently at #7, Hermansson might just be able to crack the top five soon.

Strickland on the other hand is riding a five fight win streak with him defeating Uriah Hall and Krzysztof Jotko in his last two outings. Strickland is well known for his outlandish comments to the media and this will be a good test to see whether he will be able to back up all the talk.

The co-main event will feature a battle between two rising prospects out of extremely respectable camps. Punahele Soriano (8-1) from Xtreme Couture will be taking on Nick Diaz Academy’s Nick Maximov (7-0). Soriano has the power to end someones night in the blink of an eye and is looking to rebound from his first professional loss to Brendan Allen this past July. Maximov will be stepping into the UFC octagon for the second time after his decision win over Cody Brundage last September.

Another key matchup to highlight will be the bout between Tresean Gore (4-0) and Bryan Battle (7-1). Bryan Battle won this past season’s Ultimate Fighter but he won it against Gilbert Urbina who was an alternate to Gore who had suffered a knee injury. This fight will crown the best middleweight from the Ultimate Fighter 29.

Shavkat Rakhmonov defeats Carlston Harris via KO (Punch) at 4:10 of Round 1

Brendan Allen defeats Sam Alvey via Submission (Rear Naked Choke) at 2:10 of Round 2

John Castaneda defeats Miles Johns via Submission (Arm Triangle) at 1:38 of Round 3

Chidi Njokuai defeats Marc-Andre Barriault via TKO (Punches) at 0:16 of Round 1

Jailton Almeida defeats Danilo Marques via TKO (Ground and Pound) at 2:57 of Round 1

Philip Rowe defeats Jason Witt via TKO (Punches) at 2:15 of Round 2

Malcolm Gordon defeats Denys Bondar via Submission (Technical Submission) at 1:22 of Round 1