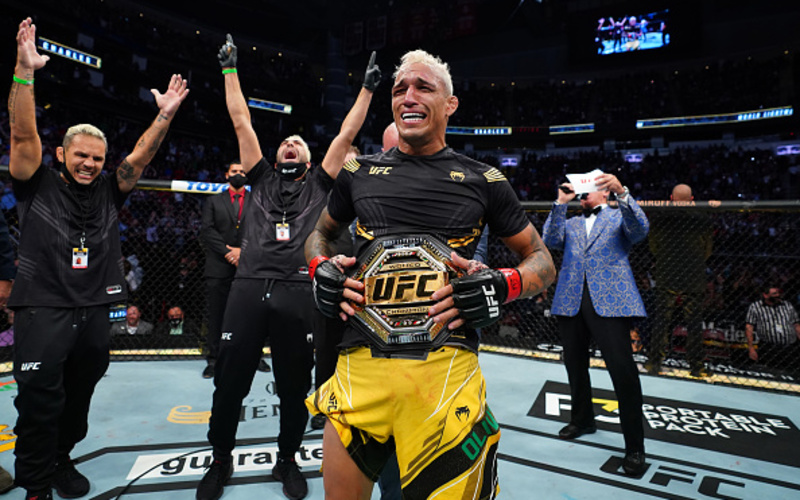 Throughout history, the ebb and flow of MMA have shaped which weight classes develop the most skilled and gifted talent. Changing patterns in weight cuts and the popularity of the sport across the world has been very influential too. Here, ranked, are the current UFC weight divisions and where they stand in relation to one another.

The cream of the crop. 155 has been the focal point of some of the UFC’s biggest stars like Conor McGregor, Khabib Nurmagomedov and BJ Penn. It also has a tremendous array of talent at all levels. At the top, every fighter could be considered the level of a champion – Poirier, Gaethje, Chandler, to say nothing of the current top dog, Charles Oliveira. But what really sets lightweight apart from the rest of the pack is how competitive it is throughout the division. Even the bottom rungs of the top 15 are notoriously competitive, containing such elite fighters as the Mateusz Gamrot and Rafael Fiziev. And below that a diverse array of combatants slug it out to break into the top fifteen. Perhaps most impressively of all, lightweight fights tend to produce much more of the all-terrain action so prized by MMA pundits, with fights flowing from position to position.

Scarcely less impressive is the Men’s Bantamweight division. Despite an odd series of events that led to Petr Yan disqualifying himself in a title match with Aljamain Sterling, leaving Sterling with the belt, bantamweight is certainly a contender for the best division in the company. Bantamweight fights combine incredible speed and dynamism with ferocious power and violence, alongside a bewildering array of talent including a concentration of the best strikers in the sport.

The only thing holding Men’s Featherweight back is that much of the division lies in the shadow of two men – reigning champion Alexander Volkanovski and former king Max Holloway. The rest of the division often pales compared to those two. But that shouldn’t distract us from the solid array of burgeoning talent at 145, particularly with how fighters like Yair Rodriguez and Brian Ortega have evolved to close holes in their games.

The recent fantastic series of bouts between Deiveson Figueiredo and Brandon Moreno have finally given Men’s Flyweight the spotlight it always deserved. Its blistering pace both on the feet and the ground is matched by a diverse series of skillsets in its upper rungs. The only thing telling against flyweight is that it doesn’t tend to produce new prospects quite as fast as the top divisions in our list.

One of the UFC’s historically marquee divisions, 170 has certainly rebounded from the dark days of the immediate post-Lawler era with a well of new talent and exciting title fights courtesy of a rapidly evolving Kamaru Usman. However, the difficulty of matchmaking with the current crop of contenders – all notoriously territorial – has resulted in a kind of divisional logjam. It would take truly special prospects to shake things up – and the UFC may have them in the form of Khamzat Chimaev and Shavkat Rakhmonov. The division is still strong on the basis of its size and relative talent but simply isn’t active enough to consistently develop its top talent. The margin for betting odds could be huge in the division as Usman is so dominant, but you can still bet with Betwinner when looking to earn some money in the welterweight division.

In the aftermath of the latest fight between champion Israel Adesanya and former champ Robert Whittaker the middleweight division’s similarities with featherweight have never been clearer – two dangerous fighters at the top, levels above the rest of the pack. Unlike the featherweight division, however, middleweight isn’t quite as competitive, with talent concentrated in a relatively small corps of fighters in the top rungs and with the rest of the division needing some work to come up to the standards of the elite.

By far the most competitive WMMA division, Strawweight has captured the hearts of MMA fans with a seemingly endless series of excellent title fights that are either brutal wars or violent finishes. Though Rose Namajunas reigns supreme for now there’s no shortage of rivals at the top ready to take her on. Even the loss of former champion Jessica Andrade to 125 has done little to slow the tide of excellent matches at the top level, though like middleweight the truly elite specimens start to thin out at the bottom of the rankings.

Men’s light heavyweight has fallen on hard times with many fighters who would have been 205ers back in the days of Liddell now at 185. The division reminded fans that it was not to be trifled with when Jan Blachowitz defended his belt against the then unvanquished Israel Adesanya’s attempt at moving up. But fans were then further reminded of its oddities when Blachowitz was dominated by the doughty but aging veteran – and now current champion – Glover Teixeira. The roster is dominated by fighters with strong core competencies but also severe weaknesses at present.

The UFC Heavyweight division has always had issues. Lately, improved weight cuts have been sucking smaller talent down to 205. But perhaps more revealingly the division’s unranked fighters are primarily less competent light heavyweights fighting up. In addition to this, even the rankings are filled with fighters with only a few decent weapons at best and some who completely attribute dependant. New prospects are rare as hen’s teeth. Fighters like DC and Overeem retiring have left the division’s top-level severely understaffed, and the UFC getting into contract disputes with their own champion, Francis Ngannou, doesn’t help. It’s just a shambles right now I’m afraid.

Women’s Bantamweight got its first shakeup in a while when long-reigning champion Amanda Nunes was defeated in a shocking upset by Julianna Pena. Apart from that, it’s a division in stasis, its rankings dominated by aging fighters like Miesha Tate and Holly Holm.

If the bantamweight ranks mainly consist of formerly good fighters Women’s Flyweight is filled with those who were never particularly impressive. Valentina Shevchenko is a legitimate talent but runs the division almost effortlessly. Her only serious competition is the hugely undersized former strawweight champion Jessica Andrade who still is levels above any other contenders.

There are only four fighters who could conceivably compete at this weight class who are of any interest whatsoever. One is Amanda Nunes, the current champion. The other three are not even in the UFC – Cris Cyborg who is in Bellator, and Kayla Harrison and Claressa Shields in PFL. This is being fairly generous. The division is absolutely awful, and the UFC doesn’t even have enough fighters to fill a ranking page. With the departure of Megan Anderson, I’m not sure if Nunes even has any other competition. The UFC should probably just close the division and open a Women’s Atomweight division at 105 lbs.