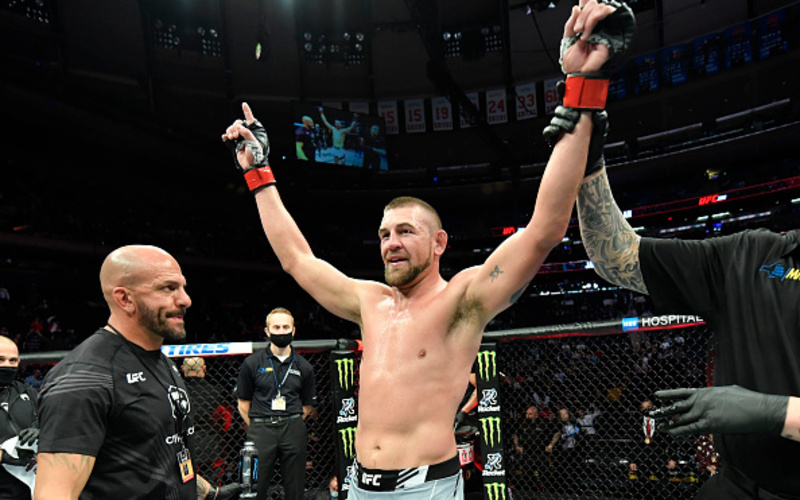 Jacoby said Oleksiejczuk is a dangerous opponent who is well-rounded and brings a high pace and intensity. “The Hanyak” is looking to match that energy.

“While I think he’s a worthy opponent and very good, I think I’m just a little bit better, especially if he wants to keep the fight standing,” Jacoby told MMASucka. “He’s a pretty dominant striker who enjoys standing up, which is my bread and butter. Of course, I would welcome that. I definitely anticipate him trying to take me down.”

Jacoby points to his experience with Glory Kickboxing as to what he feels will set him and Oleksiejczuk apart in the stand-up department.

“I’ve fought the best strikers in the world in Glory, and I don’t see it going very well for him if he tries standing,” Jacoby said.

Jacoby feels he also holds the edge in the takedown and grappling over Oleksiejczuk.

“Who knows, man? Maybe he tries, I reverse it and get a submission win. Either way, I just know I’m winning by any means necessary.”

Jacoby noted his 4-inch reach advantage and feels he is the cleaner and more experienced of the two when it comes to striking.

“Those were some absolute savages I fought in Glory,” he said. “It really taught me how to fight and how to compete with the best stand-up strikers in the world. It elevated my game immensely. I think I’m one of, if not the best striker in the 205-pound division.  I need to go out there and prove that next Saturday night. I think I hold a very big advantage over my opponent in the stand-up department.”

It’s the experience against those men that has Jacoby feeling prepared to diffuse Oleksiejczuk at UFC 272. But he knows he has to still be locked in.

“It’s a fun fight for the fans,” Jacoby said. “This kid’s very dangerous. This kid’s very good, and he’s heavy-handed. I can’t lose focus for one second across from him or it could be a short night for myself. But I’m prepared for that. I’m very dialed in. I’m on top of my game, and I know what needs to be done. I will bring a laser-like focus to that Octagon and make sure I do what it takes to get the win.”

Jacoby believes that a win over Oleksiejczuk will be enough to earn him a crack at the top-15 of the 205-pound division, as he is undefeated since returning to the UFC for his second stint.

He had a draw with Ion Cutelaba, the No. 15-ranked light heavyweight, after taking the fight on eight days’ notice after being in Mexico. Jacoby knows he belongs among the best of the light heavyweight division and plans to ascend the ladder in 2022.

“My goal is to be 3-0 this year and have three fights inside that UFC Octagon and climb the ranks and get up to the top-10. That would be awesome to be starting next year with a potential fight or two away from fighting for the title.”

Jacoby knows what he needs to keep climbing: quick finishes.

“If you look at my teammate and buddy Anthony Smith, he was an unranked middleweight. He moved to light heavyweight and he had two big knockouts of Shogun [Rua] and Rashad Evans, and next thing you know, he’s fighting for a title. Sometimes, winning isn’t enough. If the timing’s right, you go out there and get a big finish, and really show out, you can move up the rankings a little bit quicker.”

Jacoby plans to give it his best against Oleksiejcuk and is expecting high pressure from his foe.

“I think he really comes forward, and he’s going to try to walk me down. I think I do very well against opponents like that, and I can catch him at some point in the fight with a big shot, and he goes down from there. One thing’s for sure: I think I’ll be getting my hands raised, and that’s how I see the fight ending.”

UFC 272 is set to go down Saturday, March 5, from the T-Mobile Arena in Las Vegas. The card is set to be headlined by the welterweight grudge match between Colby Covington and Jorge Masvidal, two of the best competing at 170 pounds.