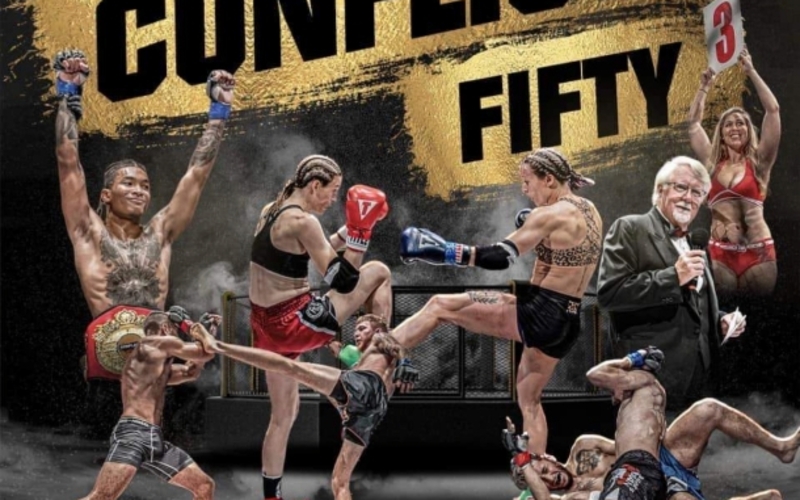 Conflict MMA 50 will take place this Saturday night at Festival Hall in Charleston, South Carolina. The card has five professional fights, seven amateur fights, with the final two amateur MMA bouts being title fights and two kickboxing matches. The main event will be a featherweight MMA bout between Kobe Wall and Joel Madak. The co-main event will be a professional kickboxing bout between Jordan Weeks and Michael Hazzard.

Kobe Wall will make his long-awaited MMA return after nearly five years away from the sport. Wall trains at the infamous Spartan Academy in Columbia, SC, and has a professional record of 4-1. He lost his most recent fight by submission against Luis Pena in 2017. Wall has a 100% finish rate winning his pro debut by knockout and then winning his next three fights by submission. His opponent, Joel Madak has a professional record of 4-1 and also has a 100% finish rate. Three of Madak’s four opponents were making their professional debut and his most recent opponent, Jamal Johnson had a record of 3-5 at the time of their fight. Madak trains at Revolution MMA in Inman, South Carolina. Since Wall’s last MMA fight, Madak has fought ten times.

Jordan Weeks will be making his professional kickboxing debut this weekend against Michael Hazzard. Weeks has a pro-MMA record of 3-4 and is 0-2 as a professional boxer. He started his professional career in 2018 but started his amateur career way back in 2012. His opponent, Michael Hazzard, will come into this fight with a slight size advantage and is also coming off a long layoff. Hazzard is 1-0 as a mixed martial artist and is 2-0 in professional Muay Thai bouts. His most recent taste of combat sports was a decision win over Timothy Stewart in December of 2015. His home gym is American Top Team Lowcountry in Charleston, South Carolina.

There will be two amateur title fights on the Conflict MMA 50 card. One of them will be for the bantamweight title and will be contested by Eduardo Castillo and Cameron Sandoval. The  year old Castillo will be the home fighter going against Nevada’s Cameron Sandoval. Both men are very close to entering their professional careers and will be looking to add another feather in their cap with a title win.

The rest of at card at Conflict MMA 50 has a ton of local talent out of South Carolina. Charleston Pou is 4-1 as a professional with his only loss being against Kenny Porter at XMMA 2. He is 1-2 as a pro boxer and is a prospect to watch out for out of SC. He will be taking on Christopher Wingate in the featured bout of the night. Collin Godbout will be making his professional debut at Conflict MMA 50 when he takes on Donovan Wegner. Godbout is the number one ranked amateur bantamweight in North Carolina and the number four ranked amateur bantamweight in South Carolina. There are also local guys like Gaberial Brown, Evan Hayes, and Danny Abad fighting on Conflict MMA 50.