Le vs. Tonon, Fernandes vs. Lineker Double Main Event Headlines ONE: Lights Out 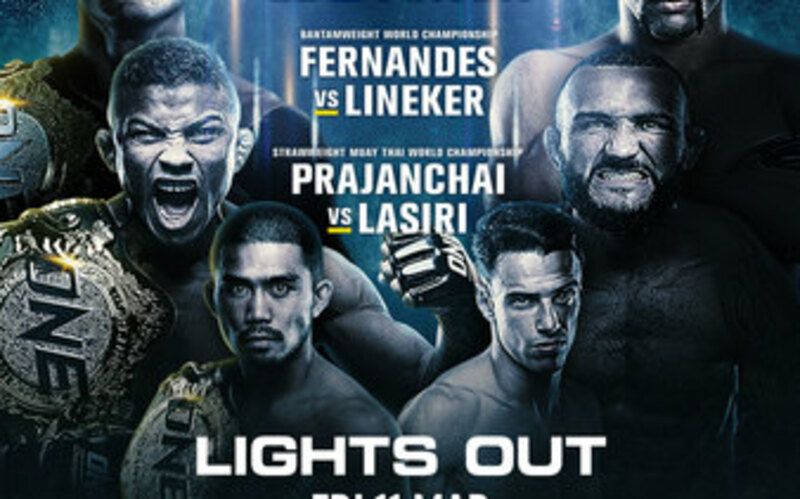 Two incredible World Championship matches headline ONE Championship’s latest offering on Friday, March 11, as the company released the full lineup for its weekend event, ONE: Lights Out.

Bantamweight bad blood will boil over when ONE Bantamweight World Champion Bibiano Fernandes and top-ranked contender John Lineker finally collide for the gold in the co-main event. The bout was initially scheduled for ONE: Bad Blood, but Lineker was forced off the event due to health and safety protocols.

ONE Featherweight World Champion Thanh Le and #2-ranked contender Garry Tonon will headline in a classic striker vs. grappler battle.

Thanh Le has been a destroyer since arriving on the global stage with highlight-reel knockouts leading him to the gold. Now, the Louisiana resident will defend the gold against one of the most creative submission artists in the world today.

ONE Strawweight Muay Thai World Champion Prajanchai PK.Saenchai and #3-ranked contender Joseph Lasiri’s title tilt, which had been previously announced for the event, has been postponed following an injury to the Italian.

The event will see the return of former two-division World Champion Martin Nguyen, as he looks to get back in the win column against Kirill Gorobets.

Alex Silva, a former ONE Strawweight World Champion, will also return to the Circle as he takes on Adrian Mattheis to defend his #5 spot in the official ONE athlete rankings.

Six more martial arts contests round out the event that will air live and free on ONE’s YouTube channel and ONE Super App on Friday, March 11, beginning at 6:00 a.m. EST/3:00 a.m. PST.

ONE: Lights Out Full Card