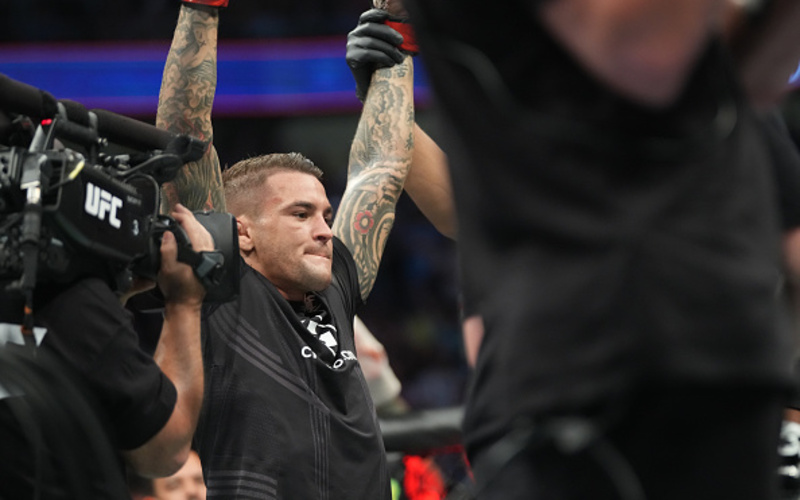 Dustin Poirier may have a desire to fight Nate Diaz next, and the feeling may be mutual, but three months removed from his lightweight title fight with Charles Oliveira at UFC 269, “The Diamond” could find himself backed into a corner and on the other end of another Colby Covington feud.

Why Dustin Poirier May Have to Fight Colby Covington

Poirier told his former teammate in an Instagram comment back in 2019 that “it’s on site” if he ever saw him at American Top Team again, as in, he would be happy to oblige the controversial welterweight contender to a fight with no cameras, whether in the gym or in the parking lot. Many at the time scoffed at the idea of Poirier, a former featherweight, ever being at a point in his career that he would need to fight Covington, who at the time had been since awarded – and stripped of the interim UFC welterweight championship, but early on in 2022 it seems the stars might be aligning. Covington has, after all, been quietly setting up a fight with Poirier ever since falling in the rematch to Kamaru Usman, and from Covington’s end, the fight makes a ton of sense. He would get to settle another personal beef with another former teammate, this time of a whole weight class down as he tries to force the UFC’s hand into giving him a third shot at the welterweight crown.

Although the fight makes sense for Poirier on paper with the former lightweight challenger having teased a move up to welterweight, he has remained steadfast in his belief that he will not acknowledge Covington with a fight in the UFC.

“I will never fight Colby in an octagon when there are finances on the line,” Poirier told Oscar Willis of TheMacLife back in February. “If I fight Colby, we’re both going to jail.”

Poirier has earned a reputation for himself as of late for being a man of his word. However, given his preference last year to fight Conor McGregor a third time instead of fighting for the lightweight title in spite of how personal McGregor made things after their second fight, it does put Poirier in a bit of a spot. While a fight with Diaz might be fun, it’s missing the juice that a fight with Covington would carry, and would likely be the far less competitive of the two. The current mixed martial arts odds on a potential matchup between the former teammates might suggest otherwise, but the variables at play in a Covington-Poirier matchup might be too much for the UFC to pass up. Poirier would be unquestionably compensated for the Covington fight, but if he is truly morally opposed to fighting Covington, it could fundamentally change his public perception, which to a guy like Poirier is invaluable.

Dana White remains confident the UFC can extend Diaz’ deal, but given the damage he has taken in recent five-round affairs, it’s tough to envision Poirier, fresh off a title shot he actually entered as the favorite in, being fed Diaz in a “get-right money fight.” The UFC had the opportunity to book that fight in Anaheim back in January, after all, so while a fight with “Chaos” might be the last thing on Poirier’s mind, his words and actions might just force him into action against one of the UFC’s most polarizing figures.