ONE 156 Eersel vs. Sadikovic Results 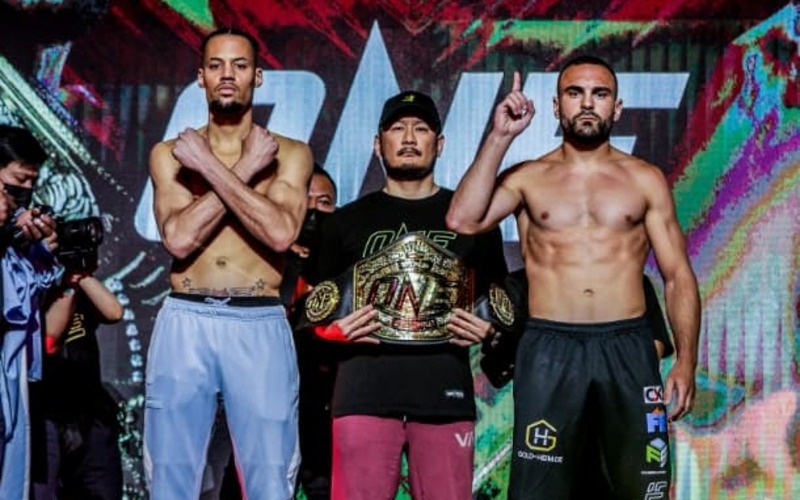 One can watch the event live on watch.onefc.com or YouTube. ONE 156: Eersel vs. Sadikovic Results can be found on this page below.

ONE 156: Eersel vs. Sadikovic is headlines by a kickboxing lightweight championship. The Dutch-Surinam fighter Regian Eersel will look to defend his championship against the German-born Arian Sadikovic. Eersel is on a massive 18-fight win streak with most of those being title fights. Eersel will be planning to extend his win streak while Sadikovic will be looking to stop him. Eersel told ONE Championship, “From my side, on Friday in the cage there will be no respect. It will be a fight. We’ll see.”

And Sadikovic said, “I was very happy to [be offered a fight with Eersel]. I thought at first I’d have to fight [Nieky] Holzken, because he was the number one contender. But even better, now it’s even better. This is a very good opportunity for me.”

In the co-main event will be for the inaugural ONE Muay Thai Women’s Strawweight Championship. Competing for this championship title is the streaking Muay Thai tactical striker Jackie Buntan. She will be fighting against “The Hurricane” Smilla Sundell. Sundell has many wins via knockout to her name and is only 17-years-old. It is a battle between two very different styles of Muay Thai. Jackie Buntan said in an interview with ONE,“I’m more than prepared for this fight. Quote-on-quote ‘fight camp,’ we’re probably in a more than two-month-long fight camp. But it’s really 13-years in the making, ever since I started training as a little girl.”

Also featured on ONE 156: Eersel vs. Sadikovic is a number one contender fight for strawweight. American wrestler Jarred Brooks will look to clear out the division by defeating South Africa’s Bokang Masunyane. The winner of this match will be next in line for the title held by Philipino champion “The Passion” Joshua Pacio. IN an interview with ONE Brooks said, “I am the best strawweight in the world and nobody’s going to take that away from me. Not Bokang, not Joshua [Pacio], not anybody in the top five… I’ve paid my dues in this division, I’ve fought twice in the last six months and I’m still ready. I still smell blood. I’m coming to grab the title.”

And Masunyane told ONE “This is bigger than myself. I’m fighting for Africa, I’m fighting for a lot of fighters in Africa to be recognized. That’s the pressure I feel behind me, my family and friends… I’d like to be the first World Champion coming out of Africa, born and raised in Africa, it’s that time.”

These three bouts plus much more action on ONE 156: Eersel vs. Sadikovic, results can be found below.

ONE 156 Eersel vs. Sadikovic Results

Jarred Brooks def. Bokang Masunyane via Submission (Rear-naked Choke) at 4:39 in Round 1.

Liam Harrison def. Muangthai PK.Saenchai via TKO (Three Knockdowns) at 2:19 in Round 1.

Mikey Musumeci def. Masakazu Imanari via Rear Naked Choke at 4:09 in Round 1.

This event was previously named ONE Reloaded and ONE: Eersel vs. Sadikovic.

“ONE 156: Eersel vs. Sadikovic will broadcast live to more than 150 countries, and fans can watch via television, tablet, computer, or mobile device. The full event stream will be available on ONE’s YouTube channel and the ONE Super App beginning with the lead card at 5 p.m. Singapore Standard Time (SGT) on Friday, 22 April. Also, you can stream the entire show on watch.onefc.com.”