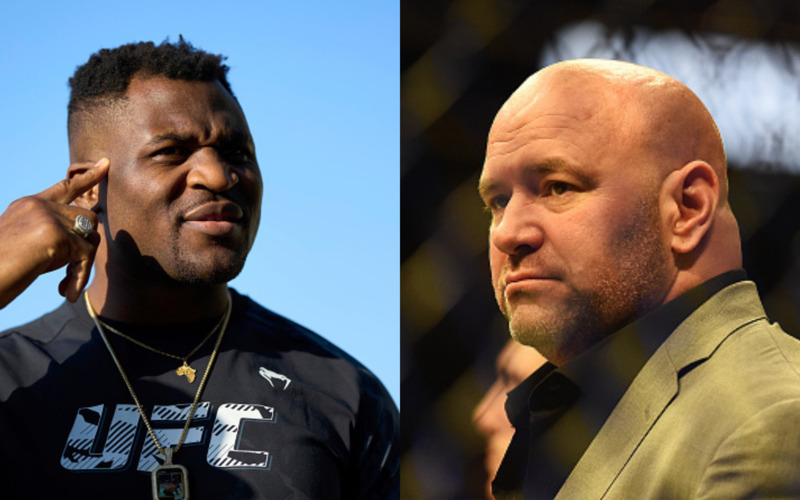 In a recent interview, the UFC heavyweight champion Francis Ngannou did not hold back his feelings regarding Dana White and UFC Contracts. Ngannou, of Cameroon, sat down on the True Geordie Podcast to tell all regarding his status in the UFC and how he felt treated by the leadership. He also spent some time with Ariel Helwani of The MMA Hour to discuss his future in combat sports.

Francis Ngannou defended his UFC heavyweight title against interim-champion Ciryl Gane in January of 2022. Leading up to this fight it was made public that contract negotiations between Ngannou and the UFC were going poorly. Ngannou said he had felt disrespected by Dana White and the UFC. When Ngannou won the title UFC president White was nowhere to be found. The Cameroonian-born champion recently underwent knee surgery and will be recovering for some time, and will not be able to take a fight. At this point, as far as we know, contract negotiations have not made much progress.

Recently, Ngannou was in the ring with heavyweight boxing world champion Tyson Fury. The two announced they would fight under any ruleset, with any type of glove. Francis sat down with Ariel Helwani and said he will not be signing a new contract with the UFC if a Tyson Fury fight is not included. After this announcement, Ngannou sat down for an interview to discuss his status and feelings toward the UFC.

“I felt happy… Because that meant I [made] my point. That means [he] kind of understands what I was saying, what I was fighting for… He was unhappy he couldn’t control me and he gets pissed of because things didn’t go his way… I was the winner, why I should be pissed off?”

In the same interview, the heavyweight champion went on to explain that many fighters likely feel similar but don’t have enough power to speak out.  Additionally, the Cameroonian fighter says that contracts between the UFC and fighters feel much more like ownership. And, he adds, that he would have liked to fix things with the UFC behind the scenes but felt he was getting bullied. Ngannou explains:

“It’s very hard for a fighter [in the UFC] to say no to a contract even if they know it’s not good for them. They have two fight left or three fights. They have 18 months left, there is a possibility that [the UFC] can extend them with no explanation, no reason… Think about that stuff you’re like, ‘This contract is messed up. This is not a contract. This is ownership… I didn’t want to do that, you know, like bring stuff up [publicly]. I thought we’re going to fix it in behind the stage. But behind the stage I was getting bullied.”

In this interview, Ngannou also outlines that he lost money from a sponsorship deal when the UFC began its sponsorship with Crypto.com. The UFC and Crypto sponsorship agreement caused Ngannou to lose a sponsorship from Coinbase. This loss was worth over one million dollars. The newly inked deal between Crypto and the UFC is worth $175 million.

When Ngannou sat down with Ariel Helwani he made it clear that he has no personal animosity towards the UFC or Dana White. Instead, Ngannou explains, that he wants a fair deal.

For the full interviews between Ngannou and the True Geordie Podcast plus Ariel Helwani with The MMA Hour, see below.