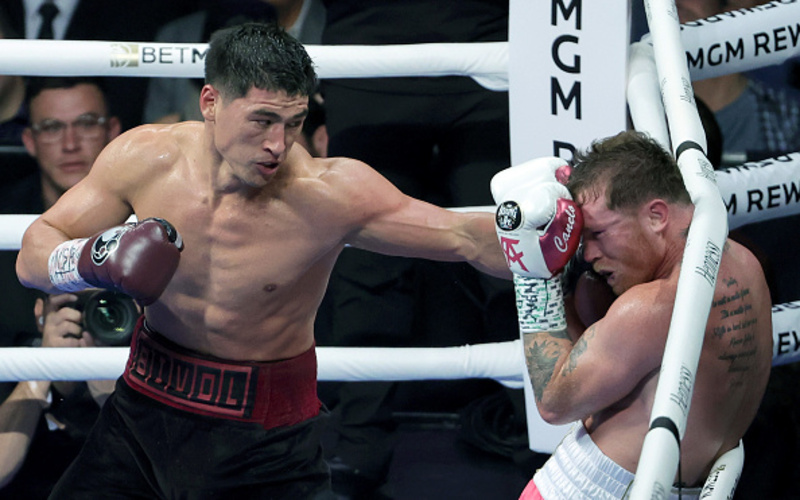 Going into Saturday nights main event, no one outside of WBA Champion Dmitry Bivol’s closest friends and family expected him to defeat pound for pound king Canelo Alvarez. It was safe to say that this fight was just another stone to turn for Alvarez campaign at light heavyweight, on his way to a trilogy fight with rival Gennadiy Golovkin this coming September—until it was not.

Bivol Upsets Alvarez in Fight that Changes the Boxing World

Boxing is never a guarantee, and Bivol came into the T-Mobile Arena without any care for the odds makers and the plans for Canelo and GGG. The Las Vegas crowd per usual was a Canelo based support system.

Bivol worked his gameplan to perfection, frustrating Canelo with a mix of combos, and relentless pressure on his way to a unanimous decision win (115-113, 115-113, 115-113) to retain the WBA light heavyweight title.

Canelo came into the first round as the one pressuring, utilizing his left hook to the body and implementing his power to garner respect from Bivol; however, Bivol began his plan of attack, countering Alvarez, leaving him visibly frustrated and bruised.

The feeling began to run its course into nerves and anxiety as Alvarez began to gain confidence late in the fight as he stalked Bivol, landing harder punches, and getting a second wind to put together vicious combos.

However, the WBA Champ showed exactly why he is arguably the best light heavyweight in boxing as he did not kneel to Canelo’s demand for respect in the ring and stuck to his gameplan and went back to throwing combos of his own by pushing Canelo back.

By the time the 12th round had started, Alvarez was visibly tired, and morally defeated as he could not throw anything in the final minute of the round. Alvarez made no excuses for his defeat.

Alvarez would suffer his first loss since a September 2013 decision to Floyd Mayweather Jr. and snaps his 16-fight unbeaten streak.

“I prove myself today that I’m the best,” Bivol told DAZN’s Chris Mannix in his post-fight interview.

When the contracts were made, a rematch clause was part of the signing incase something like this loss would happen. Now that the possibility is a reality, Alvarez wants to run it back.

“Of course, I want the rematch,” Alvarez said. “This doesn’t end here.”

“No problem,” Bivol replied. “I want respect as the champion.”