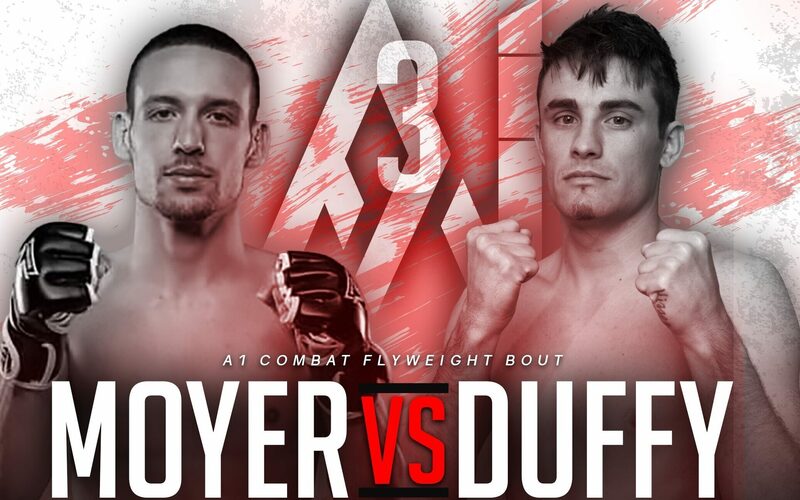 Urijah Faber’s A1 Combat returns today for the second time in as many days and the third time during its first month of action. Following an exciting night of fights last night with A1 Combat 2, the promotion brings A1 Combat 3, once again live from the Hard Rock Hotel and Casino in Sacramento, California.

The inaugural flyweight champion for A1 Combat will be crowned in the main event, as undefeated Jack Duffy faces Keaneo Moyer. Originally set to headline the inaugural show, Duffy got his title shot moved to today and will face a new opponent in Moyer. “The Fury” Duffy has not competed in four and a half years, but at 26 years old is still relatively youthful in the sport. All four of the MMA Gold-trained fighter’s wins have not gone past the first round. The 24 year old “Young Gunz” Moyer holds a 3-2 record as a professional on top of a 7-2 record as an amateur, only going to the judges’ scorecards once overall.

Longtime Combate veteran Adrian Guzman returns from over two years away to face Submission Underground mainstay John Simon, cousin of UFC bantamweight contender Ricky Simon, in the co-main event. After starting off his MMA career 2-2, Simon has won two straight, most recently picking up a first-round stoppage less than two months ago. After four straight wins by finish to kick off Guzman’s career, the Team Oyama-trained fighter has two wins sandwiched between two losses, with three of those fights seeing the judges’ scorecards.

Sunday! @UrijahFaber‘s @A1combat is back for the second show of the weekend! Both events can be seen LIVE and EXCLUSIVE on FIGHT PASS! pic.twitter.com/rNhQkVOsb8

MMA Sucka has fight fans covered with A1 Combat 3 results, with the card kicking off at 5pm ET/2pm PT on UFC Fight Pass.

**Jack Duffy vs. Keaneo Moyer — for the inaugural A1 Combat Flyweight Championship

Terrance Saeteurn def. Isaiah Wright via KO (Punch) at 0:42 of Round 1

Joshua Dillon def. Jay Pulliam via Submission (Rear-Naked Choke) at 2:26 of Round 2

Joseph Her def. Marcelino Silva via TKO (Ground and Pound) at 1:49 of Round 1