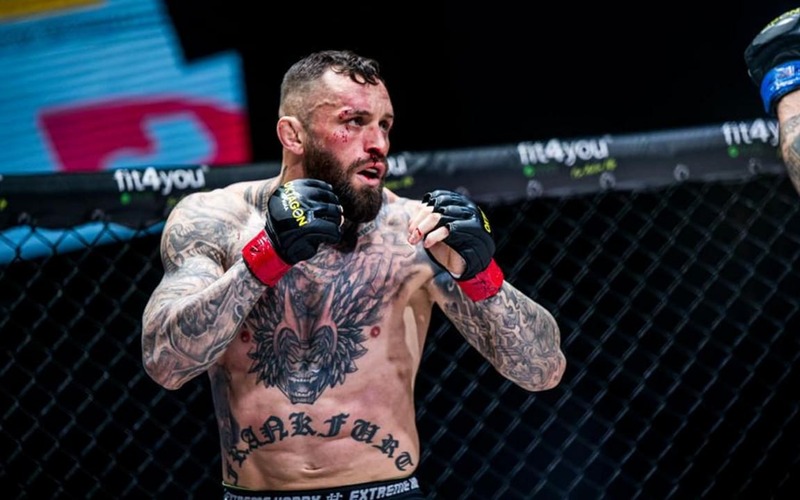 If you were to ask anyone in Germany’s MMA scene about whom the biggest name is, the name they will probably mention is Christian Eckerlin. GMC Middleweight and Welterweight champion, former-KSW contender, and now dominating Oktagon’s welterweight division, Eckerlin is one of Germany’s longest-running fighters, starting his career in 2009 after a short career in Germany’s third-division football league.

Fighting out of UFD Gym alongside brothers Martin Zawada and former UFC fighter David Zawada, Christian will be fighting on home soil for the first time in his 13-year career this coming weekend at OKTAGON 33.

Germany is a country that’s known for producing some of the best football and handball players in the world, and has ranked highly in the Olympics for many years. Despite being a sporting country, the development of MMA has been slow – and Christian has had first-hand experience in its growth.

“Germany is a difficult country with MMA – it’s still not that big. But it’s becoming big. Not as big as in other countries like Poland or Czech Republic, but we’re on a good path,” he said about the current state of German MMA.

Aside from fighting in the cage, Christian also has a YouTube channel with over 122K subscribers. The German fighter posts videos similar in style to that of a UFC Embedded – in German – to showcase everything that happens behind the scenes. “I want to show regular people what we do. The time we spend – blood, tears, everything that we spend in MMA. That’s my way to build the sport in Germany.”

One of Christian’s goals during his time in MMA is to better the reputation of the sport in Germany. As a former footballer himself, he understands how traditional a country Germany is but he hasn’t allowed that to stop him from growing the sport. His primary method of achieving this is not fighting in the biggest organization, but in one that pushes him both as a fighter and a pioneer. For Eckerlin, that’s Oktagon MMA.

“I’m not young anymore – I’ll fight maybe another four or five years then I’ll stop. But for me, it’s not about where I fight,” he said when asked about perhaps joining the UFC. “Look, Oktagon has done everything to come here [to Frankfurt] and they’re coming! This, for me, is more important than UFC, I also fought in KSW – they said they wanted to come to Germany but they didn’t. For me, it’s important for the organization to push me to build the sport in Germany and this is the reason why I’m doing this with Oktagon.”

As for the future of MMA in Germany? Christian remains hopeful of its growth, however slow it may take.

“If we continue in this direction, it might take eight years before we reach a good level,” the fighter comments. “But hopefully, this growth might get faster after the event in Frankfurt on June 4th,” he continues with a smile.

Catch OKTAGON 33 live on Oktagon.tv June 4, and watch the rest of the interview on MMA Sucka’s YouTube channel: