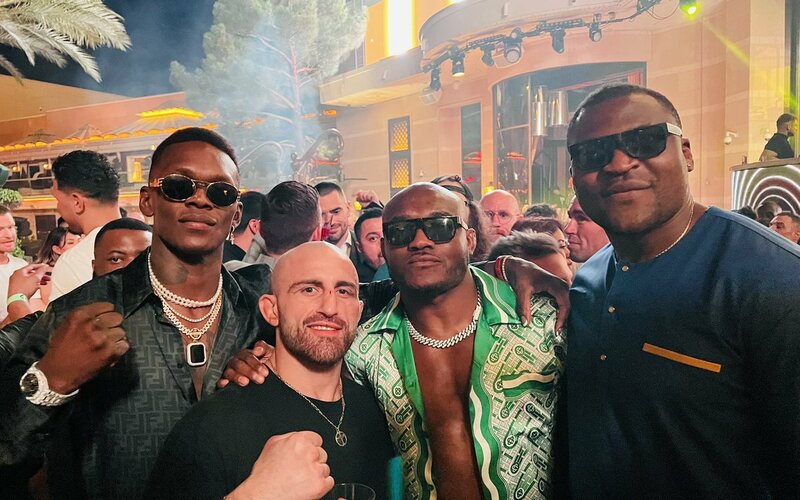 On the heels of yet another dominant, standard and uninspiring performance at UFC 276 (where fans walked out of the event early), worrying statistics have come out about the middleweight champion, Israel Adesanya. The research shows that Adesanya, the ‘best striker in the UFC’ and the former kickboxing sensation has the second-lowest finish rate of all current champions, only ahead of the new strawweight champion, Carla Esparza.

Post #UFC276, Israel Adesanya has the second lowest UFC finishing rate amongst the current champions with Carla Esparza the only fighter below Stylebender. pic.twitter.com/Ck0OW3fc1c

Let’s not get mistaken, Adesanya has been phenomenally dominant throughout his UFC career thus far, especially at middleweight. With just a single anomaly on his record, which was a loss up at light heavyweight, Adesanya has dominated every opponent he’s faced. With that being said, only four of his wins have come inside the distance. His debut, his Madison Square Garden coming out party against Derek Brunson, the dominant undisputed championship fight against Robert Whittaker and the grudge match against Paolo Costa all came via finish, but his other eight bouts have all gone the distance.

Comparison to other champions

We know that MMA at the highest level isn’t all about finishes. Finishes, however, create the viral moments that fans and fighters now look for. Jiri Prochazka is 3-0 in the UFC with three finishes and was just 28 seconds away from dropping very far down in the statistics for finishes. Francis Ngannou‘s power is scary, we know this. He has phenomenal knockout power and has finished all but one of his opponents, Ciryl Gane. Against Gane, Ngannou implemented a completely different game plan and looked to wrestle far more than ever before, going to a decision.

Charles Oliveira is the uncrowned lightweight champion, having lost his belt on the scales but won the fight proceeding that weight miss. He is the record holder for all-time finishes with 19 and again is an anomaly. He’s arguably the most devastating finisher in combat sports today and his record suggests this. His 90.5% UFC finish rate speaks for itself.

Adesanya has a joint finish record with the welterweight champion, Kamaru Usman as well as the featherweight champion, Alexander Volkanovski. Usman, however, has begun to finish fights a little more regularly, with three finishes in his past five fights. Volkanovski has just one finish in his past six bouts, however, it’s worth noting that three of these six fights have been against Max Holloway, a man famous for his legendary chin.

Is it Really an Issue?

Is Israel Adesanya’s finish rate really an issue? On paper, no, it isn’t. For Isreal Adesanya, he’s still getting his hand raised. Fans also don’t think that it’s too much of an issue, with 52.9% believing that Adesanya’s finishing rate isn’t a problem.

As Kevin Hart said to the middleweight champion in the dressing room after UFC 276, ‘At the end of the day, you’re a legend. Everybody’s watching’. Adesanya’s personality, his presence and overall demeanour will keep him as a PPV star, he’s unlikely to play co-main event to anyone.

The issue with Adesnaya is that he talks up his game so much before the fight itself that when he does put in an un-eventful performance, people hold him accountable to his pre-fight words. Ahead of UFC 276, he stated that his performance would be like Anderson Silva‘s dominant, breath-taking performance against Forrest Griffin back in 2009. It was far from that, but he won every round. It wasn’t a highlight-reel performance, it was instantly forgettable and not particularly entertaining.

Is it Adesanya’s fault?

Some emphasis does have to be put on his opponents, however. Jared Cannonier was risk-averse during his performance in Las Vegas. For Adesanya, why put himself in harms way when he’s cruising to a victory? Cannonier should be putting himself at risk in order to try and beat the champion, this is his only chance and yet he never really rolled the dice. This is a view shared with the former two-weight world champion, Daniel Cormier. Speaking on his podcast, he stated: ‘If Jared Cannonier is going to cruise to a loss, how is it Izzy’s responsibility to do more?’.

Don’t forget, the likelihood of Adesanya facing former foe, Alex Pereira next is extremely high. Pereira already holds a knockout victory over Adesanya whilst fighting in GLORY and there is little doubt that Adesnaya will want to get that one back, which could mean that we get an aggressive, risk-taking ‘Last Stylebender’ and all this discussion could be put to bed.