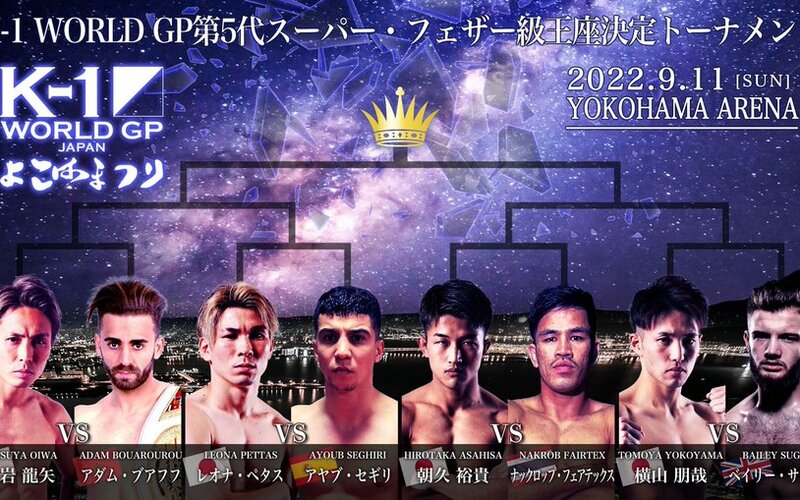 This past Friday K-1 announced the first-round matchups for the Super Featherweight Championship Tournament. This one-night, eight-man tournament will be featured at K-1 WORLD GP 2022 JAPAN: Yokohama Festival, which will take place on Sunday, September 11, 2022. The purpose of the tournament is to determine a new champion after Takeru vacated the belt.

Oiwa has a background in both karate and rugby. He started training kickboxing during college and made his professional debut after graduation. Oiwa is a Krush alumni, who unsuccessfully challenged for the Super Featherweight title on two different occasions. He currently rides a two-fight winning streak with his last fight taking place at K’Festa 5, where he defeated the former Featherweight champion, Yuki Egawa.

Pettas was a Krush Super Featherweight champion who vacated the belt. Most notably he unsuccessfully challenged Takeru for his belt at K’Festa 4: Day 2. This loss ended his nine-fight winning streak. In his most recent fight at THE MATCH 2022, he lost to Kan Nakamura.

Seghiri is a protege of Artur Kyshenko, who famously fought against Masato at K-1 WORLD MAX finals back in 2007. He grabbed the national title in Spain and ISKA international title.

Asahisa is another fighter with a karate background, which he has studied since he was 5 years old. He switched to kickboxing five years later. The Japanese fighter is a Krush and Wu Lin Feng mainstay, who holds World -60kg title in the latter. Out of his five fights in the K-1 ring, he only lost once to Haruma Saiko in the quarterfinals of K-1 World GP 2018: 2nd Featherweight Championship Tournament. He currently enjoys a three-fight winning streak.

Fairtex has 65 wins and 10 losses to his name. He competes in the tournament on the recommendation of the chairman of the Willa Saklek gym.

Yokoyama is an accomplished amateur kickboxer, who won 2015 J-NETWORK All Japan A-League -58kg championship. On the professional level, he won 2016 J-NETWORK Rookie of the Year Tournament Champion and unsuccessfully challenged for the Krush Superfeatherweight championship. This loss in the finals of a championship tournament against Chihiro Nakajima put his five-fight winning streak to an end. He bounced back by defeating Katsuki Ishida at Krush 138. Interestingly enough he’s unbeaten in the K-1 ring winning all of his 3 fights.

Sugden is a GLORY veteran, who once was ranked third in the featherweight rankings. The Brit currently holds the ISKA World Super Lightweight titles.

The tournament’s reserve bout will feature Naoki Yamamoto taking on Narafumi Nishimoto. In addition, the Super Lightweight title will be on the line as the reigning champion Tetsuya Yamato will defend against Daizo Sasaki.