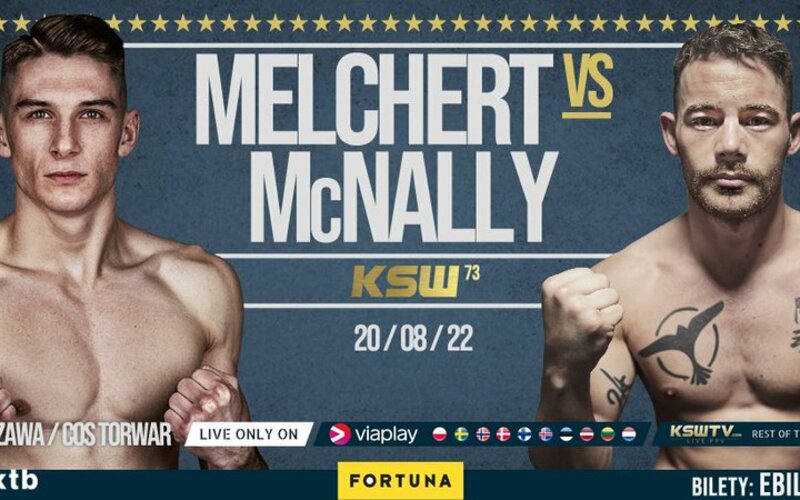 The matchup between two talented fighters that are at the beginning of their professional careers will serve as KSW 73 opener. The undefeated Miłosz Melchert, who won both of his previous fights by a knockout, will face Carl McNally. The Irishman is known for his viral finishes on the amateur MMA circuit. KSW 73 will take place on August 20th at Torwa Arena in Warsaw.

Melchert entered the professional MMA world with a bang last year. He had two fights and won both of them by knockout. His last victory took place at the Babilon MMA 29, where he beat Grzegorz Rutkowski. Prior to that, he stopped Arkadiusz Skrzypkowski at Amber Fight MMA. Before he made his debut in a professional MMA circuit, the Słupsk native harnessed his skills at amateur competitions. Back in 2020, he won the national amateur MMA championship held by Amateur MMA League.

McNally also has had a rich amateur career, during which he not only won the bronze medal at the IMMAF 2015 World Championships but also gained attention with his effective fighting style. The Irishman usually won ahead of time, and his favorite finishing technique is a guillotine choke. ‘King Carlos’ presented it during his professional debut in March this year. At Clan Wars 43, he submitted Alex Budoiu with it in the very first round of the bout.

KSW 73 will be headlined by a matchup between two accomplished kickboxers, who decided to make the transition to MMA: Tomasz Sarara and Arkadiusz Wrzosek. The first already made his KSW debut a year ago, when he defeated Filip Bradaric, and it looks like he would have an advantage. However, Wrzosek can count on the crowd’s support, as Torwar Arena is placed across the street from Legia Football Club’s stadium, which he is a long-time fan of.