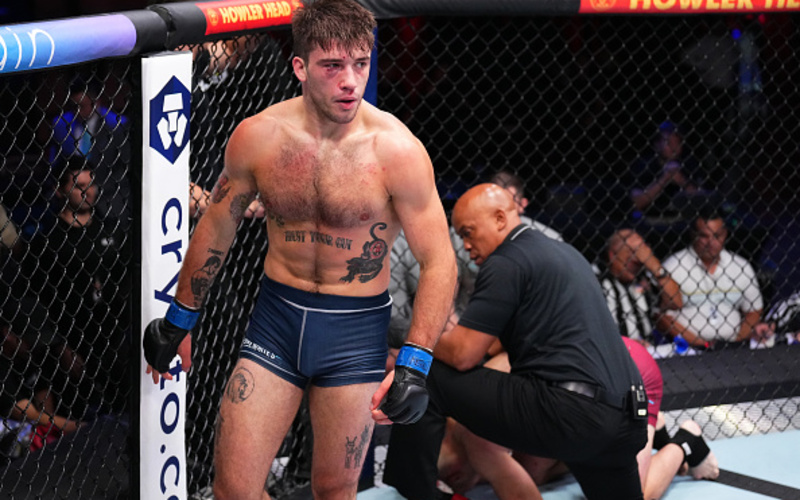 Billy Goff (8-2 MMA) punched his ticket to the UFC with a stunning comeback win over Shimon Smotritsky (8-2 MMA) in their Dana White Contender Series duel on Aug. 2.

Goff TKO’d Smotritsky at the 3:37 mark of the first round of their contest.

“I’m feeling pretty good,” Goff told MMASucka. “I’m pretty much healed up. Not much soreness left from the fight. And everything is kind of settling in, so I’m pretty stoked.”

Goff eventually flurried and stunned Smotritsky with an uppercut. The commentary team thought Smotritsky was fatigued, but Goff thinks his foe was simply rocked.

“When I saw that Dana had stood up and he was super stoked about it, I was like, ‘Yeah, I’m getting a contract,'” Goff recalled.

Goff plans to stick to welterweight in the UFC. Only for the right fights would he consider going up to middleweight, he said.

Bo Nickal, a wrestling sensation, competed at middleweight on the Contender Series a week after Goff. Nickal submitted Zack Borrego in just over a minute with a rear naked choke. Nickal did not earn a contract, as he is only 2-0 in professional MMA, but his manager, Malki Kawa, hinted his fighter could return for another Contender Series shot sooner rather than later.

“Guys, relax. @NoBickal  could be in the ufc, but I want to get him experience. Just trust the process. Sept we do it again,” Kawa tweeted.

Goff himself said he plans on making his UFC debut before the end of the year and said he’s ready to go. He knows he can’t call out anyone in the top-15 yet.

“Those are the people I usually know, and I’m not trying to rush to the top. I’m trying to take my time and my stock worth as much as it can be.”

“I was hoping Bo Nickal will get a contract because I wanted to fight him,” Goff said. “Just because he’s only had two pro fights now. I think he’s just not ready for this stage. But that’s why he didn’t get a contract. Somebody I was talking to saw a post that Mickey Gall would be a good match-up. I have no set ideas. I’m just going to see who they offer. I’m sure they’ve got an idea.”

Those are short-term match-up ideas. Thinking long-term, Goff came up with a couple of fighters he hopes are at the top of the mountain by the time he hits his prime.

“I think [Khamzat] Chimaev will be in his prime by the time we get to him, and I think that will be exciting. There’s also [Shavkat Rakhmonov] who’s 16-0, I think. He’s doing really well. It looks like he’ll be around, and that’ll be an exciting fight.”

Goff knows that those fights are a ways away, however, and he is focused on the here and now.

“I’ve just got to get in there and make a good debut. That’s what’s on the task list right now.”