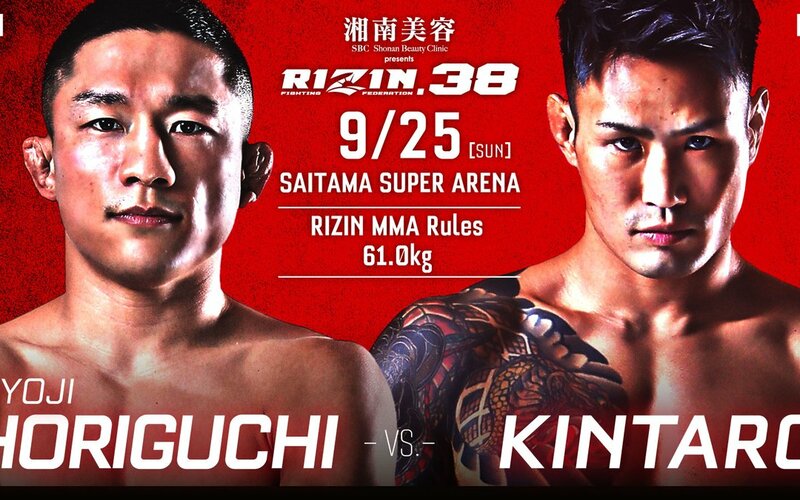 Kyoji Horiguchi will return to RIZIN to take on Yuto Hokamura. It was announced at this week’s Hawaiian presser by Nobuyuki Sakakibara. The event will take place on September 25th at Saitama Super Arena.

The former RIZIN bantamweight champion will step into the white ring for the first time in almost two years. Horiguchi’s stint in Bellator didn’t go as well as he hoped for. The Japanese fighter lost two of his three fights for the promotion and will be looking for a first win since 2020.

Horiguchi, who has a 29 – 5 record, last fought in Japan at RIZIN 26. He defeated Kai Asakura and became two times bantamweight champion. However, he had to vacate the belt after signing with Bellator. There he lost to Sergio Pettis in the bantamweight title fight. He also lost to Patchy Mix. A far cry from the days when he held both RIZIN and Bellator championship gold.

Kyohei Hagiwara has a 6 – 6 record. Currently, he’s suffering a two-fight losing streak. He was beaten by Satoshi Yamasu and Kleber Koike Erbst consecutively.

Chihiro Suzuki sports a 7 – 3 record. He’s a kickboxing veteran, who fought mainly for KNOCK OUT promotion. He’s riding a two-fight winning streak as he defeated both Sora Yamamoto and Ren Harimoto.

The reigning DEEP lightweight champion Juri Ohara has a 31 – 17 – 3 record. He rides an impressive eight-fight winning streak. He hasn’t been beaten since 2020.

He will take on Luiz Gustavo. The Brazilian fighter sports an 11 – 2 professional MMA record. During his RIZIN stint, he bounced back between wins and losses as he won three out of his five fights. Most recently he defeated Yusuke Yachi at RIZIN Trigger vol. 3. This was a rematch for their previous bout that took place at RIZIN 12. Gustavo also won that one.