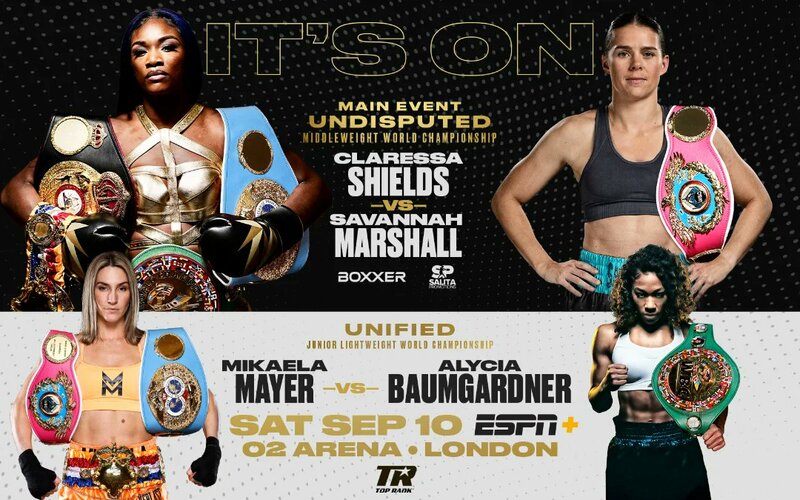 One of the biggest fights in female boxing history goes down this weekend live from the O2 Arena in London, England. Hard-hitting Brit, Savannah Marshall will take on the self-proclaimed ‘GWOAT’, Claressa Shields. The fight will be contested at middleweight and Marshall’s WBO belt, and Shields’ WBC, WBA and IBF belts will all be on the line. In a first for mainstream boxing, the card will be an all-female card, with a huge co-main event when Mikaela Mayer meets Alycia Baumgardner with three of the four belts on the line in the super featherweight champion.

With back-to-back blockbuster fights, this card is certainly not one to be missed.

It may be a week away but this is going to be great! #ShieldsMarshall pic.twitter.com/gbndVTHA0c

Someone’s 0 has got to go in the main event as both women hold an undefeated professional record. Shields is not only a two-time Olympic gold medalist, but she has also amassed a record of 12-0. Her amateur record is also something to be impressed by,  holding a record of 64-1. That one loss, however, was to none other than her opponent on Saturday night, Savannah Marshall.

Marshall, herself has an extensive amateur record of 61-16, however, holds a devastating record as a professional. Sitting at 12-0, Marshall has only seen a decision twice in her career, knocking out 10 of her opponents, including her last eight straight.

There’s no doubt that Marshall is the heavier hitter as Shields has only stopped two opponents in her professional career and her last finish victory was back in 2017. Marshall’s trainer, Peter Fury, recently stated Marshall is the “hardest female puncher in history” when speaking to Sky Sports.

Heading into the bout, both women are predictably in a hot run of form. Shields, last time out, went to a decision with Ema Kozin, someone who, realistically was not on her level. Marshall was ringside for this bout and made it clear that she wasn’t impressed with the American’s performance. The two got into a heated exchange after the bout, where Marshall told Shields – “If you perform like that against me, I’ll absolutely wipe the floor with you…”.

The Brit finished the always game, Femke Hermans last time out within just three rounds. Interestingly, it took 10 rounds for Shields to get the better of Hermans when they faced in 2018.

Our prediction for this fight is that Marshall will simply be too big, too strong and too powerful for Shields. What is interesting is that the 10-two minute rounds favour Shields, who will look to box and move for the whole time and frustrate Marshall. Yet again, there is a call for women to fight either 10-three minute rounds or 12-three minute rounds. There can be no doubting Shields’ credentials heading into the bout, she’s considered one of the best female boxers to ever live for a reason, however, over 10 rounds, Marshall will likely be able to track her down at least once, land on her and hurt her. Will it be enough to put the gritty, determined American away? We’ll have to wait and find out!

The co-main event is just as intriguing as the main event. Similar to the situation in the main event, someone will leave with three of the four belts at super featherweight.

Meyer sits at an impressive 17-0 with five knockouts and is looking to defend her WBO, IBF and The Ring super-featherweight belts on Saturday night. Her opponent has just one loss on her record but since then, has gone on a six-fight winning run, alternating finishes and decisions. Baumgardner’s overall record sits at 11-1 but her biggest win came in November of last year when she became the first woman to defeat the then dominant, Terri Harper. Meyer is not only more experienced than her opponent, but she’s fought a lot more rounds, 114 to Baumgardner’s 53.

The two women have constantly gone back and forth on social media, taking jabs at each other ever since the bout was announced and it’s clear that they don’t like each other. Mayer has criticised Baumgardner’s first loss saying, “she looked like a f——- bum. I mean she looked like an amateur.” when speaking on the DAZN boxing show.

Baumgardner has stated: “I’m going to make you do what I want you to do” when talking about Mayer. She’s also said that she wants to break her nose, jaw and that she’s going to make her go home with a “messed up face“.

Mayer is getting better in front of our eyes. At 32 she’s still making big improvements to her game. She put on a boxing masterclass last time out against Jennifer Han, defeating her 100-90 X 2 and 99-91. She’s arguably the better boxer, especially taking into account her Olympic pedigree, however, against Harper, Baumgardner showed just how dangerous she can be when she gets her timing down. She beat Harper to the punch all night and timed the concussive blow to perfection.

Mayer could use her superior size to fatigue her opponent as we know that Baumgardner will be on her toes all night looking to get in and out and land her famous ‘Bomb’ on Mayer. With that being said, Mayer certainly has enough all-around skills to upset the rhythm of Baumgardner and utilise her boxing to pull off the win. Again, the 10-two minute rounds play in favour of Mayer in this one. 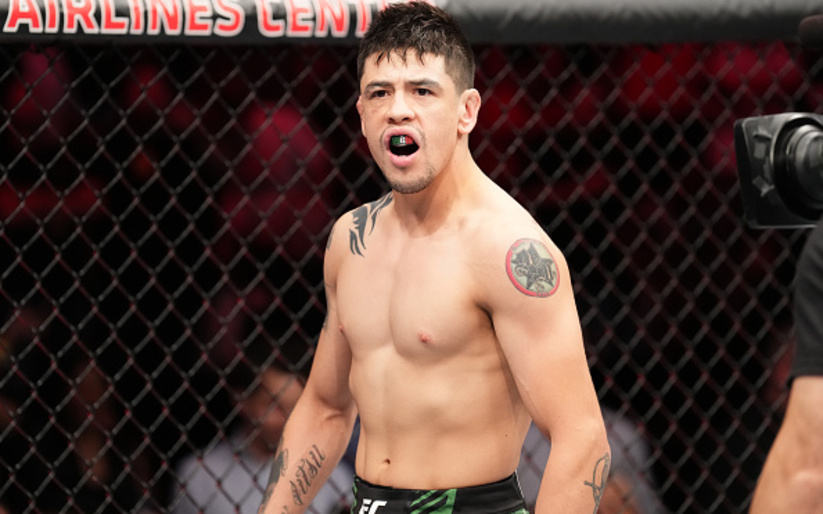