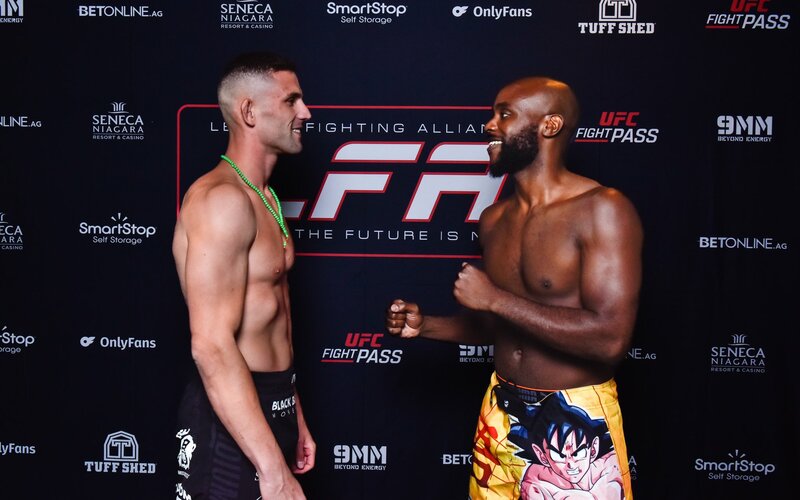 After a quick two week break, Legacy Fight Alliance is back to deliver LFA 141: Talundzic vs. Brown at Dobson Arena in Vail, Colorado. This high-altitude fight card will have 6 bouts between some of the best prospects in and around the mid-west. With plenty of familiar faces fighting throughout the night, LFA is sure to deliver an event worth watching.

Headlining the festivities is a very exciting welterweight fight between Haris Talundzic (5-0-0) and Chris Brown (8-4-0). Talundzic is a Bosnian born fighter out of Factory X and definitely fights like it. The striker has won all 4 of his professional fights for the promotion and has even showcased his submission skills with both of his finishes coming from rear naked chokes. Brown on the other hand is a pretty impressive striker himself with a record of 4-2 in LFA. He has faced some tough competition throughout his whole career with losses to Carrington Banks, Ignacio Bahamondes and most recently Carlos Leal in the PFL Challenger Series. Brown plans to bounce back in his return to LFA when he faces Talundzic in the main event.

The co-main features a very decorated former wrestler in Bryce Meredith (2-0-0). Meredith competed for the University of Wyoming during his college years and would eventually become a three-time NCAA All-American. Now training at the MMA Lab, Meredith will look to tap into that strong wrestling base when he faces takes on Nathan Fought (0-0-0). Although this is Fought’s first time fighting as a pro, he is has plenty of amateur experience winning all 6 of his fights. Earlier this year, the Jackson Wink fighter had his first amateur fight in over 8 years winning the match by split decision. At 38 years old, Fought is ready to shock the world and defeat his toughest opponent yet in his professional debut.

Tonight’s event has plenty of prospects that some fights fans should recognize and look forward too. Kathryn Paprocki (3-2-0) returns for her first fight since appearing on the most recent season of The Ultimate Fighter. Luis Gurule (1-0-0) and Josiah Reyes (3-0-0) return to the LFA cage to give each other their first pro loss. There’s also another former D1 wrestler and now impressive finisher in Canada’s Ben Tynan (2-0-0).

MMA Sucka will have live coverage for LFA 141: Talundzic vs. Brown as it airs live on UFC Fight Pass at 10pm E.T./7pm P.T.