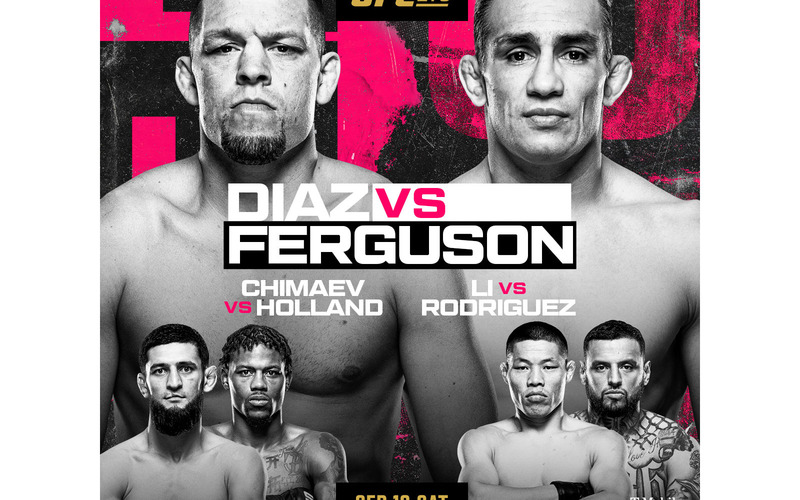 In an unprecedented series of events, three separate fights for UFC279 have all been rebooked only one day before the event. The reason for this rebooking is more than likely the shambolic attempt at a weight cut from Khamzat Chimaev, where he weighed in at 178.5lbs for his welterweight bout with Nate Diaz.

Instead of continuing with the Chimaev vs Diaz match-up, the UFC has opted to pair Diaz with fellow veteran of the sport Tony Ferguson, who will be making his first welterweight appearance in a long while and weighed in the same as Diaz at 171 lbs.

Chimaev will now face Kevin Holland in the co-main event. Holland had been scheduled to fight Daniel Rodriguez at a catchweight of 180lbs. This has left Ferguson’s original opponent Li Jingliang to be matched up against Holland’s original opponent, Rodriguez, in a fight where it seems that Jingliang has been given the short end of the stick as Rodriguez weighed in nearly 10lbs heavier than him.

This reshuffling of the main card isn’t the first abnormality that UFC 279 has thrown up as the press conferences were canceled Thursday due to a massive backstage brawl breaking out between several of the previously mentioned fighters and their respective teams. One thing for sure is that this fight card has been anything but predictable so far and if the fights are as wild as the build-up has been, then we are all going to be in for a very interesting night.

If you enjoyed reading this article then check out some of our others here!