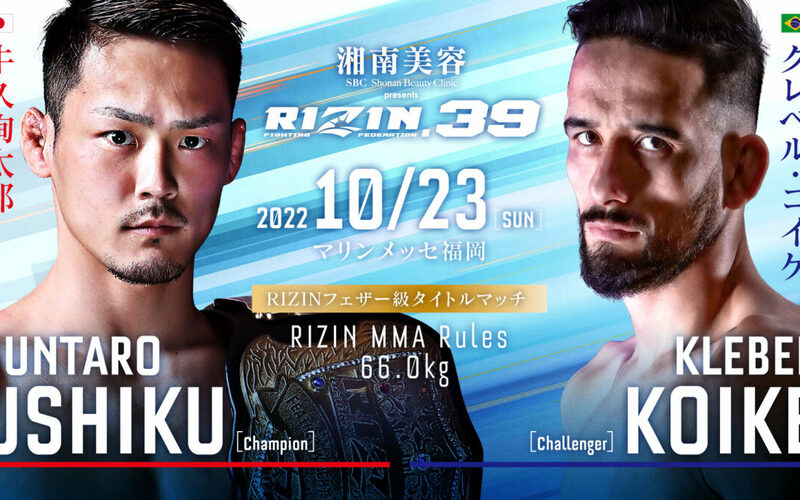 At yesterday’s press conference it was announced that RIZIN 39 will take place on October 23rd in Fukuoka. The event will be headlined by a RIZIN featherweight title matchup between the defending champion Juntarou Ushiku and the challenger, Kleber Koike Erbst.

Ushiku has a 22 – 8 – 1 record. The 27 years old made his RIZIN debut back in October 2021. At RIZIN 31 he captured the championship gold by defeating Yutaka Saito. The Pancrase and DEEP veteran managed to do that thanks to a doctor’s stoppage. The doctor was forced to end the fight after examing Saito’s cut, which he received after a knee strike. The two of them met again at RIZIN 35 with Ushiku once again being victorious. He currently rides a four-fight winning streak with two additional victories inside the DEEP cage.

Koike Erbst sports a 30 – 5 – 1 professional MMA record. A Bonsai Jiu Jitsu and Roberto de Souza’s and Hideki Sekine’s fellow gym member is no stranger to being a champion. He won the KSW featherweight title belt at KSW 39, where he defeated Marcin Wrzosek by a unanimous decision. However, he lost the the belt due to not making weight prior to his defense at KSW 41. With that being said, still submitted Artur Sowiński with a rear-naked choke. Later he was victorious over future KSW champion Marian Ziółkowski at KSW 44. At KSW46 he lost to Mateusz Gamrot in his final fight in the Polish promotion.

Since then he switched his focus to the Japanese MMA circuit. He defeated Akiyo Nishiura at  ONE Japan Series: Road to Century back in 2019. Next, he made his RIZIN debut at RIZIN 26, where he submitted Kyle Aguon. He continued to stack up victories inside the RIZIN’s white ring by submitting Kazumasa Majima, Mikuru Asakura, Ulka Sasaki, and Kyohei Hagiwara in succession. All the submissions came either during the first or second round.

You can watch the press conference below: