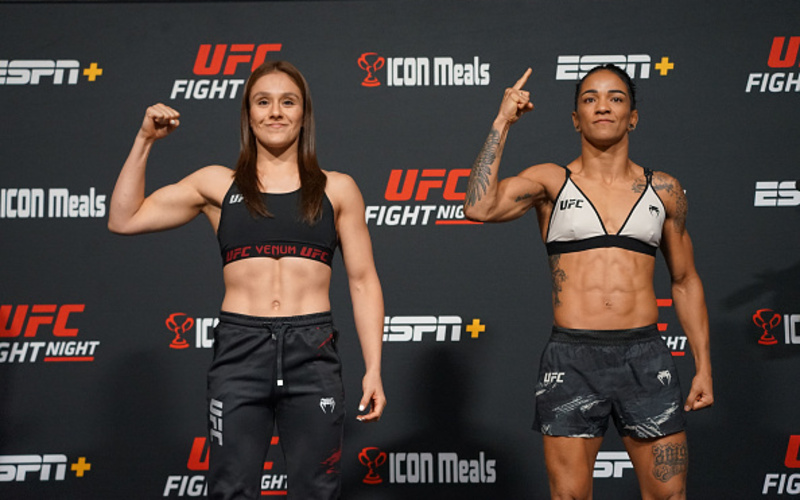 After a week off, the Ultimate Fighting Championship is getting back after things with its return to the UFC Apex in Las Vegas, Nev. for a women’s strawweight main event between ranked fighters Alexa Grasso and Viviane Araujo.

Araujo, the sixth-ranked women’s strawweight in the UFC, returns to the Octagon for the first time since edging a closely contested decision over Andrea Lee this past May. She enters Saturday’s main event a slight underdog to Grasso, who is positioned just one spot above her in the UFC rankings. Mexico’s Grasso is an ever-evolving fighter whose grappling game and pace have grown to match her hand speed. However, both fighters prefer to strike, and Araujo, despite winning each of the first four fights of her career by submission, has managed to keep things on the feet and competitive against standup fighters like Lee and Katlyn Chookagian.

Grasso spent the first six fights of her career competing in the UFC strawweight division, coming into the fold before the company adopted the women’s flyweight division back in 2017. She earned a pair of decisive decision victories over Ji-Yeon Kim and Maycee Barber before submitting Joanne Wood earlier this year. Saturday will also mark the first time she has fought twice in the same calendar year since 2019. She is one of the most improved women’s fighters on the roster, and if she can extend Araujo and successfully maneuver around the Brazilian’s power, she will stand a good chance at winning a decision or perhaps even securing a late stoppage, though Araujo is yet to be stopped in seven UFC appearances.

The winner could find themselves one fight away from a shot at the UFC women’s flyweight champion, Valentina Shevchenko.

Featherweight mainstay Cub Swanson is looking to put together a final run at bantamweight to close out his tremendous UFC career. Though he went on a four-fight losing skid between 2017 and 2019, he has since rebounded to win three of his last four, most recently knocking out Darren Elkins last December. However, Saturday will mark his first time competing in the bantamweight division and should be in for a striker’s delight against Factory X Muay Thai’s Jonathan Martinez.

Martinez will be looking to build upon his three-fight winning streak by taking on by far his toughest and most experienced opponent yet. He also told MMASucka last week he is looking forward to welcoming Swanson, a promotional mainstay, to the bantamweight division.

“I never really thought I was going to fight him,” Martinez said. “His name came up, and I said ‘yes’ right away. I’m super excited to go in the cage with him.”

The Los Angeles native is primarily a standup fighter and has seldom gone to the grappling over his 10-fight run in the UFC. Because of this, Swanson may have a path to victory on the ground. However, if the fight does stay standing, Martinez may be able to weaponize his youth. He has been knocked out just once in his career and is proficient as using kicks to create space between him and his opponent. Either way, fight fans should be in for an exciting fight slotted in as the co-main event.

The remaining main card fights will see Dusko Todorovic take on Jordan Wright at middleweight, Victor Henry look to stave off tricky veteran Raphael Assuncao at bantamweight and Misha Cirkunov and Alonzo Menifield meet in a clash of styles at light heavyweight.

Todorovic and Wright are two of the most kill-or-be-killed fighters at 185 pounds, and the fighter who is able to land first and hardest could take a decided advantage for however long the fight lasts. Henry is coming off a massive upset of Raoni Barcelos at UFC 270, and another win over a talented, though declining veteran in Assuncao could put him just outside the bantamweight rankings. Menifield, meanwhile, is an ever evolving mixed martial artist training out of Fortis MMA. Cirkunov will have the likely grappling edge, but if Menifield can test the Canadian’s chin in his return to 205 pounds, he may be able to put a stamp on his fourth win in his last five bouts.

UFC Fight Night: Grasso vs. Araujo will also offer a healthy slate of competitive preliminary fights. Brandon Davis vs. Mana Martinez will headline the prelims with both fighters looking to notch their second-career UFC victory. Two talented grapplers are also scheduled to compete when Jacob Malkoun meets Nick Maximov in a fight that could see both fighters press for a hard-fought three rounds of action. Joanderson Brito will look to follow up on his recent knockout of Andre Fili when he takes on Lucas Alexander, and women’s strawweights Sam Hughes and Piera Rodriguez will square off with both fighters looking to secure consecutive victories.

CJ Vergara missed weight by three pounds for his fight with Tatsuro Taira, the only fighter on the show to do so. He will be docked 30 percent of his purse for the miss. Lastly, a welterweight fight between Mike Jackson and Pete Rodriguez is scheduled to kick off the preliminary portion of the show. Jackson, who infamously fought CM Punk prior to the COVID-19 pandemic, earned another improbable disqualification victory over Dean Barry earlier this year. If he can defeat Rodriguez, the MMA media member will make it three in a row.

Jonathan Martinez def. Cub Swanson via TKO (leg kicks) at 4:20 of Round 2

Dusko Todorovic def. Jordan Wright via TKO (strikes) at 3:12 of Round 2

Alonzo Menifield def. Misha Cirkunov via Knockout (left hand) at 1:28 of Round 1

Joanderson Brito def. Lucas Alexander via Submission (RNC) at 2:02 of Round 1

Tatsuro Taira def. CJ Vergara via Submission (Armbar) at 4:18 of Round 2

Pete Rodriguez def. Mike Jackson via Knockout (Knee) at 1:33 of Round 1