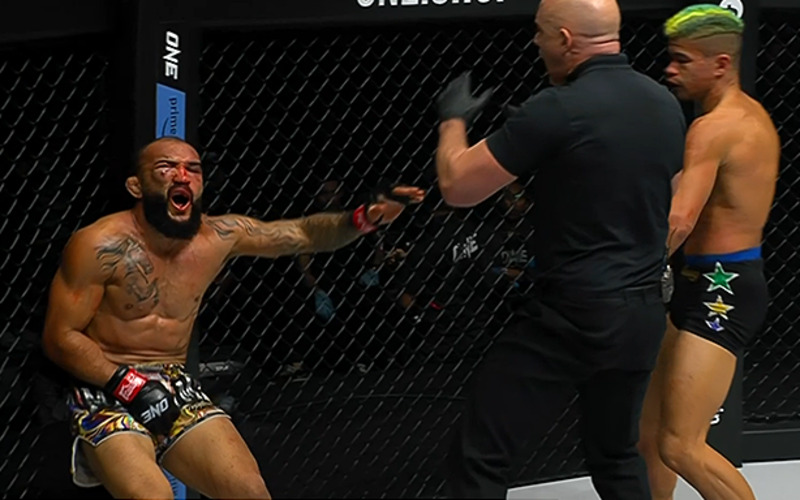 The ONE on Prime Video 3 main event between John Lineker and Fabricio Andrade was delivering on its promised action. However, an accidental low blow from Andrade put a halt to the contest and ended with an unsatisfying conclusion for all involved. However, the top-ranked bantamweight contender is not so sure that the bout could not have continued.

Andrade had been calling out Lineker for months before the bout and even called him a “chicken.” As the ONE Championship star moved to the top of the list for a shot at the gold, he forced himself into the conversation with his brash words. Following ONE on Prime Video 3, he is showing no signs of taking a more conservative approach.

“He took the easy way out. He brought out a broke cup. Nobody can guarantee that it was actually from the fight cause he was acting like he knew the cup was broken. Honestly, I don’t believe I broke the cup. Maybe it was already broken,” said “Wonder Boy.”

The Brazilian talent said in the Instagram video that he felt confident in the main event bout. That was evident by how strongly he began the action and with his brilliant knee to the sternum of Lineker, which caused the former champion to react in pain. If not for the low blow, that could have been the championship strike for the 25-year-old.

Instead, the title remains vacant, and Andrade remains in its pursuit. Although “Wonder Boy” welcomes a rematch against Lineker, Andrade is willing to take on any contender in an effort to grab the ONE Bantamweight World Championship. In the video, Andrade maintained that he is still in shape and wants a quick turnaround to compete for the belt.

“You can see I’m fresh. I took no damage from this fight, but I wanna be active. I wanna fight as soon as possible, and I don’t think this guy wants a rematch with me so maybe let’s put another guy for the title because he couldn’t even make weight, so now the title is vacated,” said Andrade.

It is too soon to tell if he will get his wish, but the story with Lineker seems far from over. The rivalry only appears to have gotten stronger after ONE on Prime Video 3’s untimely finish. Andrade shows no signs of tempering his feelings after getting so close to the gold but unable to sit on the bantamweight throne.