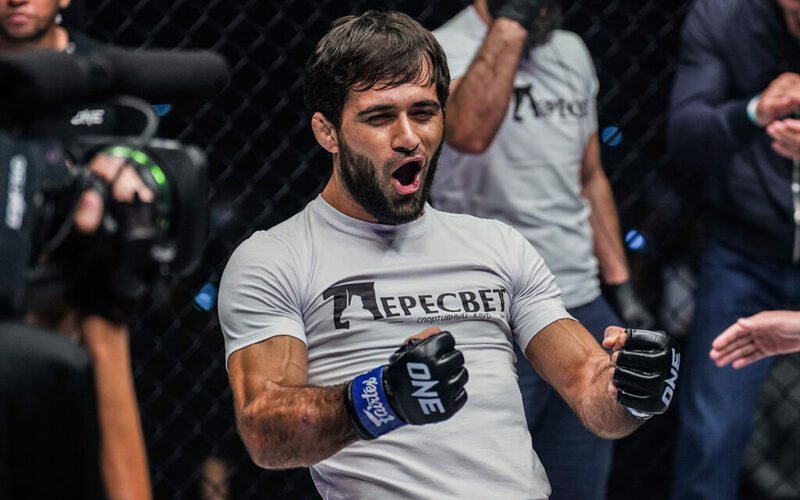 Shamil Gasanov made an instant impact in his ONE Championship debut at ONE on Prime Video 3: Lineker vs. Andrade. The incoming Russian talent squared off against #2-ranked featherweight contender Kim Jae Woong and promptly defeated him inside the first round. The performance shot Gasanov into the official ONE athlete rankings at #5.

Although the end came quickly, Gasanov was complimentary of his striking. He said that Kim’s punches were painful, which was why he quickly moved into exploiting the grappling differences in the match. And he knows that in the wild world of mixed martial arts, anything can happen when the bell rings.

“There was nothing dangerous in that fight, but then again, you have to understand that this is fighting, and anything can happen. Today is my turn. Tomorrow it can be him,” said Gasanov.

With his quick submission, Gasanov earned a $50,000 bonus check from ONE Chairman and CEO Chatri Sityodtong. “The Cobra” said he would be giving that check to his parents. But earning it was all because of the interim ONE Heavyweight World Champion.

“Well, Anatoly Malykhin told me that a submission in round one could be my good chance to get a bonus – and that’s exactly how it all played out. It’s a great feeling to have a bonus,” said Gasanov.

The victory continued his impressive start to his mixed martial arts career. Gasanov improved his unblemished record to 13-0. Following the shocking debut, “The Cobra” is now right in the thick of the hunt in the featherweight division.

The upper echelon of the division is loaded with talent. However, his performance quickly caught the eye of former title challenger and world-renowned grappler Garry Tonon. The American took to social media to ask if he should break Gasanov’s leg. To say the least, Gasanov did not take to that too kindly.

“He is nothing more than an American trash talker. If he thinks he can break off my leg, I can rip his head off and mail it back to the States after the fight. He should be grateful people are talking about him now. He should thank me. ONE has put him on the shelf, forgot about him already. If he wants to come back, I will help him to retire,” said Gasanov.

With both men trying to move into position to challenge for the gold, this budding rivalry could have massive stakes. While nothing has been booked between the two yet, it is a compelling matchup for the fans. In the meantime, Gasanov will return home and deliver a healthy bonus to his parents and celebrate his star-making ONE debut.