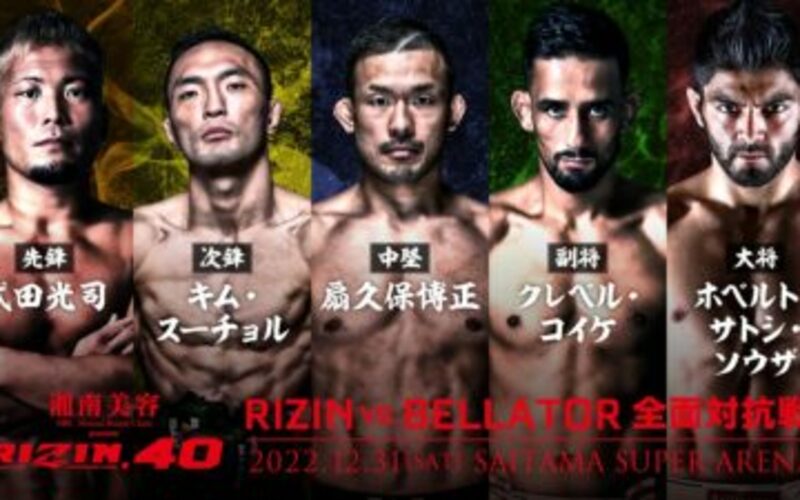 One of the biggest MMA cross-promotion shows goes down on New Year’s Eve. Rizin and Bellator are sending their best to face off in a series of matches. Rizin 40 will be the epicenter of five major Bellator vs Rizin fights that will pit some of the best fighters from their respective promotions against one another. Champions will face champions, a third rematch goes down, and one promotion can claim brand supremacy in 2022. It’s New Year’s Eve, it’s at the Saitama Super Arena, and it’s MMA under Rizin rules. What more could you ask? Let’s preview all the Bellator vs Rizin matchups. 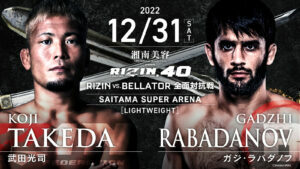 Two of the best lightweight wrestlers from Rizin and Bellator will face off. Photo courtesy of Rizin.

Koji Takeda (15-3) is a fighter from Brave Gym who has an extensive Greco-Roman wrestling background. A former Deep lightweight champion, he is a fighter that never stops pushing the pace once the bell rings. He’s fast and will take you on a ride on the suplex bullet train if he manages to get a hold of you. Protect your arms as well because he has one of the most deadly armlocks in the fight game.

Gadzhi Rabandanov (18-4-2) comes from a Sambo background and is coached by former UFC lightweight champion Khabib Nurmagomedov. He has that strong wrestling background that is all about that drowning pressure. He is a good striker as well who relies on the counter strike.

Will either fighter go for a takedown attempt and if so will they be successful? That is the question about this fight. Will the Rizin rules which allow soccer kicks to a grounded opponent also be a factor? We have seen unified rules favor wrestlers because no knees or kicks to the head are allowed to a grounded opponent. Takeda who is familiar with Rizin rules should certainly use that to his favor in case of an erroneous takedown attempt by Rabandanov. I can see Rabandanov having the advantage in the striking department in terms of volume but Takeda is a hard guy to put down. Expect a calculated, but extremely pressure-heavy pace from both fighters. 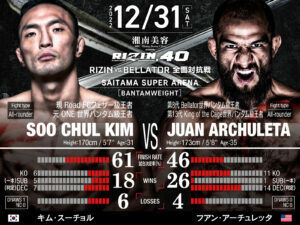 Soo Chul Kim (18-6-1) is one of the best fighters you’ve never heard of. A Road FC featherweight champion and bantamweight champion, he spoiled the win streak of Hiromasa Ougikubo this year with a surprise win. Kim has a chin of concrete and is difficult to get down on the ground. He has strong striking that he loves delivering to the body. He has used his diverse skills to defeat such fighters as Leandro Issa, Issei Tamura, and Marcus Brimage.

Juan Archuleta (26-4) is the former Bellator bantamweight champion and like Kim has fought in multiple weight classes. Archuleta is a stamina machine who even in bad situations is able to keep his composure. His ability to keep a strong pace as the fight goes on puts a toll on his opponents as many cannot keep up with him. Archuleta is an exceptional all-around fighter who loves to mix up wrestling, striking, and grappling to always guarantee definitive wins. During the pre-fight press conference, he said of his opponent “I hope he’s going to create offense for my offense… It’s going to be a long f****** 15 minutes for him.”

The question of this fight is who can outlast the other. I see this fight likely going to a decision but whoever is going to push their will and break their opponent early will likely be the winner at the end. I expect these guys to come forward at each other and not let up. I can see Archuleta wanting to get it to get ground and that way he can neutralize the striking of Kim. Archuleta was recently KOed for the first time in his career by Raufeon Stots. Will that KO make Archuleta hesitant to strike? If so, that’s where Kim should keep the fight. This fight is the “people’s main event.” 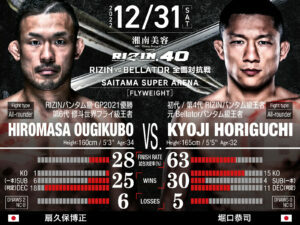 Hiromasa Ougikubo and Kyoji Horiguchi meet for the third time at flyweight. Photo courtesy of Rizin.

Hiromasa Ougikubo (25-6-2) has become an unlikely top 3 fighter in Rizin. Winner of the 2021 Bantamweight GP and TUF finalist,  Ougikubo wins most of his fights through sheer grit and pressure. He is always coming forward and doesn’t let his opponent get any breathing room. Ougikubo hasn’t finished in a long time but he’ll exhaust you beyond belief.

Former Bellator and current Rizin bantamweight champion Kyoji Horiguchi (30-5) is one of the best flyweights and bantamweights in the world. His speed and power are nearly unmatched. Famed for his karate-style counter striking, his striking is fast and powerful and if the fight is forced to the ground, he has the ability to be successful in the submission game.

Horiguchi is 2-0 against Ougikubo. First fight he submitted him. At Rizin 11, he dominated but couldn’t put him away. Is the third time finally a charm? Ougikubo comes to a match with heart and always leaves it in the ring. His wins see him mix up his striking and his takedowns to always keep his opponents guessing. For Horiguchi, his strength has been in and out striking and he has used that effectively against Ougikubo the past two times. Ougikubo will not want to fall for that again. He needs to get up close and keep the boxing dirty to not let Kyoji get any breathing room. 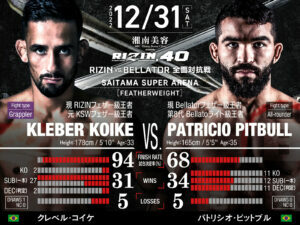 This will be a classic grappler vs striker match-up between two champions. Photo courtesy of Rizin.

Kleber Koike (31-5-1) is the current Rizin featherweight champion and a former KSW featherweight champion. His submission game might be the best at 145, submitting an astounding 27 opponents. He has finished all of his opponents in Rizin by submission and went to Phuket Top Team in Thailand to sharpen his stand-up. If you get into his guard you are as much likely to get caught in a submission as you are losing an arm petting a shark.

Patricio Pitbull (34-5) is one of the stalwart veterans of Bellator. The former lightweight and current Bellator featherweight champion is a man who possesses both knockout power and a strong submission game. His wins include Michael Chandler, A.J. McKee, and Juan Archuleta.

This will be a grappler vs striker match. If Kleber is going to win it has to be with jiujitsu. There is no way he can hang with Pitbull on the feet. Kleber has been knocked down by people who don’t have excellent boxing and if Pitbull cracks him good it’s over. For Pitbull, he’s got to make sure to not leave his neck open or play into Kleber’s guard. Kleber loves jumping or forcing people into his guard then dragging his opponent to his corner to hear the advice of his Bonsai Jiujitsu seconds. I believe this fight will be either won with a submission by Kleber or a knockout by Pitbull.

A.J. Mckee (19-1) has become perhaps the first homegrown Bellator star since Scott Coker took over the company. The former Bellator featherweight champion, he finished everyone and won their featherweight grand Prix. He made his lightweight debut this year with a win over Spike Carlyle. The son of MMA veteran Antonio McKee,  he is the perfect embodiment of an MMA fighter. He’s got great striking, great takedowns, a charismatic personality, and is always hunting for a finish.

Roberto “Satoshi” de Souza (14-1) is perhaps the best jiujitsu black belt to transition to MMA. An ADCC gold medalist and the current Rizin lightweight champion, he has finished every opponent he has shared a cage and ring with. He fights as if Doug Crosby is the judge in all of his fights. Having wins over Tofiq Musayev and Johnny Case, he is a guy that I repeat… YOU DO NOT WANT TO GO TO THE GROUND WITH! You will be submitted no ifs, ands, or buts.

McKee always comes out strong in the first round. He’s not paid by the hour. He has 10 finishes in the first round and he will definitely look for that knockout in the first round. Satoshi should have one game plan in this fight and that is to get McKee in his guard and hunt for the submission that way. Satoshi’s striking has improved a lot since his Rizin debut but it will not be on McKee’s level.

Even the non-Bellator vs Rizin portion of the show is stacked. Former K1 kickboxer and now MMA fighter Ren Hiramoto (2-2) will take on a mystery opponent in a boxing match (only in Japanese combat sports could that happen), Seika Izawa (8-0) will take on Si Woo Park (9-4) in the finals of the Super Atomweight Grand Prix, John Dodson (22-13) will take on the 68 fight Japanese legend Hideo Tokoro (35-31-2) and plenty more fights to look forward to.

To see the MMASucka staff picks for the Bellator vs Rizin matches go here.

To check out our coverage of the Rizin 40 weigh-ins go here.

Follow along with MMASucka as we provide Rizin 40/Bellator vs Rizin Results throughout the card.

NOTE: Depending on what part of the world you are in, you may have access to the entire show on Fite. In the US, the Bellator vs Rizin portion will not be available on Fite and will air on Showtime tape-delayed at 8 p.m. EST/5 p.m. PST on Dec. 31. To get the show on Fite you can go here.