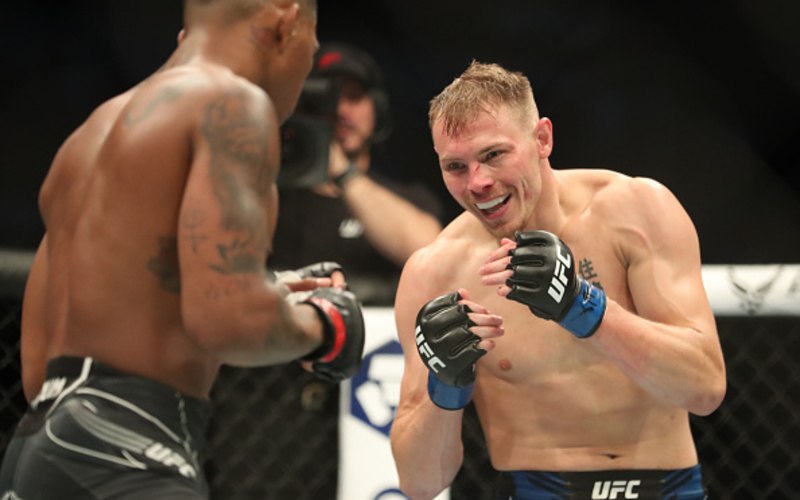 Adam Fugitt (8-3 MMA, 0-1 UFC) hopes to spoil the Octagon debut of Japan’s Yusaku Kinoshita (6-1 MMA) and launch a productive 2023 campaign at the UFC event scheduled for Feb. 4 at the UFC Apex in Las Vegas.

Fugitt said Kinoshita is a “dangerous” opponent, adding he feels his foe likes to use a karate style to counter.

“I see somebody who wants to really engage on the feet and has a lot of belief in his hands,” Fugitt told MMASucka. “You know, I have a lot of belief in my striking as well. I prefer to use a variety of weapons. I like to stay out there at my range and hold people to that. When they break through, I like to transition into my clinch game and/or my takedowns into my grappling. If he stays out there too far, he’s going to find himself at the end of my kick or my straight punches. If he gets too close, he’s going to find himself tied up or potentially taken down, and/or pushed up against the fence with me using some knees and elbows.

“How I see this fight going, I’m going to go with the cliche: I see myself getting the victory,” Fugitt continued. “In a perfect reality, I want to get the victory via KO. Wherever the fight goes, I’m willing to hunt out the finish in any position. I am very comfortable all over the place, and I embrace that embodiment of being an MMA fighter and using every weapon I have at my disposal.”

Fugitt came up short in his UFC debut against the highly-touted prospect Michael Morales at UFC 277 on July 30. Kinoshita makes his UFC debut off a Dana White Contender Series win over Jose Henrique Souza on Aug. 30.

Fugitt is not expecting Kinoshita to have any “Octagon jitters” whatsoever. Fugitt pointed to Kinoshita’s appearance on the Contender Series and having experience in the UFC Apex and believes that puts them on an even playing field – Fugitt is yet to fight in the minimal-crowd Apex.

“At the end of the day, it’s a fight,” Fugitt said. “It’s a competition. We get in there to compete against each other and to put our best foot forward and bring our best selves into the cage. That’s what I plan on doing.”

Fugitt, who turned 34 on Jan. 12, said time is “100 percent” of the essence in making a run in the UFC welterweight division. Fugitt admitted he got to the UFC late – but not for a lack of trying.

“Just because this sport is funny,” he said. “It’s all about who sees you and who you interact with. I didn’t get here as soon as I wanted to. This year, I want to make up for some lost time. I definitely want to earn myself a multi-fight contract to make up for that lost time. I’m not trying to look past Kinoshita at all. My focus is on him.”

Fugitt wants to knock Kinoshita out.

“That’s how you get noticed in this sport is going in there and finishing guys on the feet.”

But if it doesn’t happen that way, Fugitt believes he can finish Kinoshita in any area of the bout.

“If it’s not on the feet, I’ll take the TKO on the ground, and if it’s not a TKO, I’ll take the submission. I just really think anywhere the fight goes, I can finish this and seal the deal. I want all the fans to know I’m going to go in there and put my best foot forward to give them that finish and that memorable fight.”

Fugitt believes memorable fights and finishes are what will propel him through the welterweight division quickly, especially when he knows the clock is ticking. His goal, however, is to leave a lasting impression on the sport and test himself in the process.

“My record shows I’m either finishing people or I’ve gotten finished. I’m not going to brag about getting finished, but my fights tend to not go the distance. I want to put on those memorable performances. I want fans to be entertained when I fight. I definitely want to fight the best guys I can fight, and you can only do that in the UFC. I want to move up the ranks as far as I can go and push myself. This is all a test for myself to see, ‘How good am I?’ These thoughts that I have in my head that I can step in there on any given night against anybody in the weight division and go in there, not only compete, and push them to the brink and beat them. Is that just an ego thing? Or is that a truth? I want those answers. That’s it.

“I think that’s all I can do is whatever fight is presented to me, put my best foot forward, search out the finish like I always do, and put on that memorable fight that fans like to see. I think that my performances speak for themselves. That’s how I’ve always gone about it, but I also know closed mouths don’t get fed, so maybe I’ll have to call somebody out when the time is right or ask for that next big fight so I’m not just the gatekeeper. This is definitely the spot I’m in right now. I’ve kinda got the access here. You’ve gotta get past me to get in.”

Fugitt, while 34, does not have a lot of mileage on his body compared to other 30-something year olds who have been competing in MMA since they were in their early 20s. Fugitt made his professional debut in late 2016.

Fugitt currently feels his age is just a number – albeit with a little more “audible noise.”

“I’ve got a lot of joints cracking and popping. Other than that, my body feels amazing. I’m taking better care of my body than I ever have. It’s been a process of learning and growing. I feel great. I’m looking to definitely make up for some lost time this year.”

Fugitt has taken some added measures to take care of his body. After he TKO’d Soloman Renfro under the Legacy Fighting Alliance banner in February 2022, paving the way for his UFC call, he had an ankle sprain. He saw a physical therapist in town who believed there were things they could work on to help Fugitt add muscle.

“‘You’ve got a lot to work with,'” the Fugitt recalls his physical therapist telling him. ‘”I think you should definitely sit down, think about that, and see what you want to do.’”

Fugitt has been working with the physical therapist since May in a bit to increase his strength, power, and movement.

He took a trip to the UFC Performance Institute and was tested to see what his deficiencies were.

“Basically, they told me I’m very below average in a bunch of areas and ‘here’s your room for improvement,’” Fugitt said. “Which is good, in my opinion. It would’ve been a complete waste of time if they told me, ‘You’re maxed out. You can’t do anything.’”

Fugitt has since changed up his training routines.

“Trying to lay off of so much sparring and really put the Mamba mentality in my training and just kind of fall in love with basic drills, doing a lot of footwork again, doing those basic drills and really trying to perfect those things. Seeing it play out in the minimal sparring I’ve been doing is great. I really feel like I’m doing the right things here to also evolve as a fighter.”

The UFC card on Feb. 4 is set to air on ESPN+. The card will be headlined by a heavyweight fight between Derrick Lewis and Serghei Spivak.