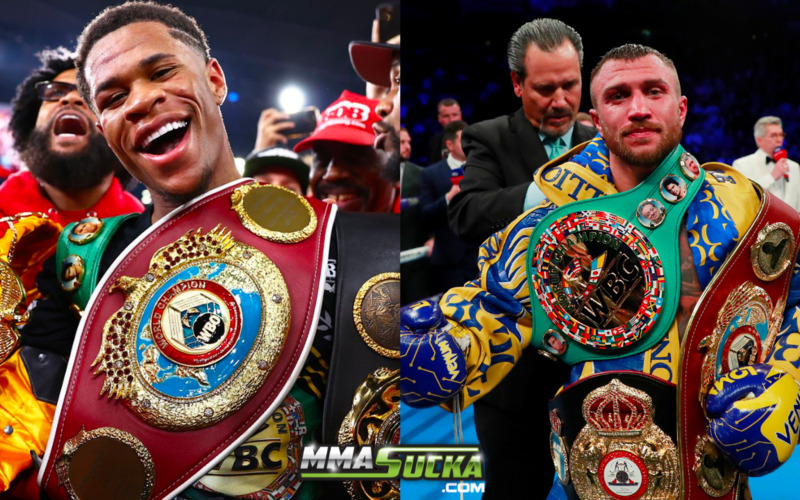 Devin Haney and Vasyl Lomachenko are on pace to faceoff with all four lightweight belts on the line in May, Lou Dibella announced.

Devin Haney vs Vasyl Lomachenko is reportedly now being planned for May 20th at MSG in New York. [According to @ChavaESPN] pic.twitter.com/H78tBxPGey

Haney will be making his PPV debut and while that is a new name for fans to have to pay for, he has proven he is worth it. Add in that it is Lomachenko in one of the biggest fights of his career, and there should be enough for boxing die-hards and younger fans to meet and make this an event.

What makes this most interesting and a very interesting fight isn’t the technical skillsets but the physical ones. The welterweight size of Haney against the featherweight size of Lomachenko will be interesting to see. More often than not, boxing press conferences can be hit or miss from an entertainment standpoint, so getting to see the size difference early will be great to see.

By the time Haney finishes rehydrating for the fight it is very possible that he looks two weight classes bigger. Lomachenko is going to be up against it, outsized even more so than when he fought the bigger Teofimo Lopez in October 2020 which was the first fight that people saw him be out muscled in and even outclasses at times.

If Lopez and his size can present a tough problem to solve, the much more technical and composed Haney may be otherworldly in comparison.

Lou DiBella, promoter of Haney, thinks this will be the coming out party and best showcase for the young 24-year-old.

Worth noting, the framework of a deal is in place for Haney vs. Lomachenko. No contracts are signed according to Coppinger but he says things are “looking good.”